Nanorobotics is the emerging technology field creating machines or robots whose components are at or close to the scale of a nanometer (0,000000001 Meters – 10−9 Meters).More specifically, nanorobotics refers to the nanotechnology engineering discipline of designing and building nanorobots, with devices ranging in size from0.1–10 micrometers and constructed of nanoscale or molecular components. The names

have also been used to describe these devices currently under research and development. 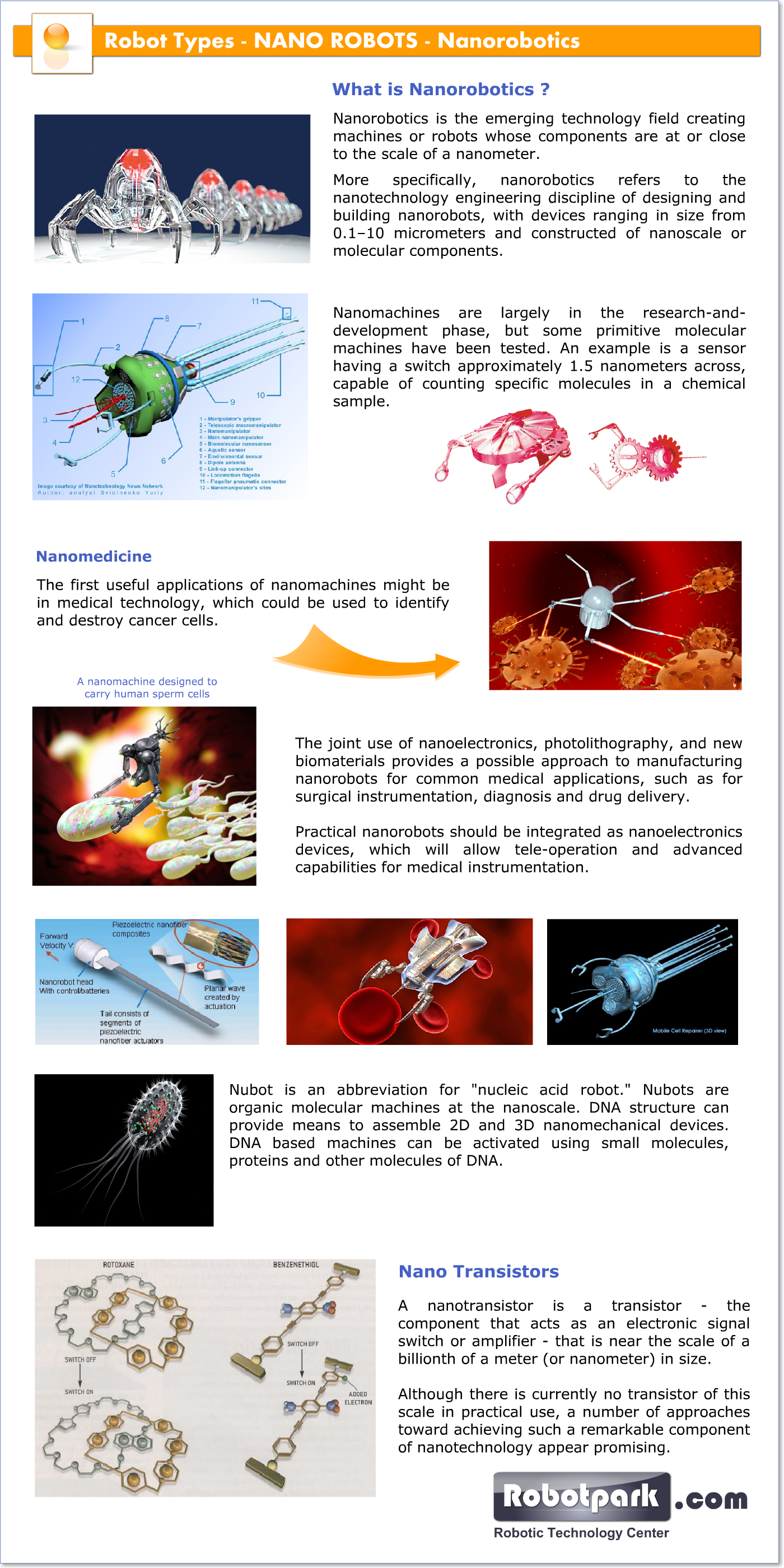 Nanomachines are largely in the research-and-development phase, but some primitive molecular machines have been tested. An example is a sensor having a switch approximately 1.5 nanometers across, capable of counting specific molecules in a chemical sample. The first useful applications of nanomachines might be in medical technology, which could be used to identify and destroy cancer cells.

Another potential application is the detection of toxic chemicals, and the measurement of their concentrations, in the environment. Rice University has demonstrated a single-molecule car developed by a chemical process and including buckyballs for wheels. It is actuated by controlling the environmental temperature and by positioning ascanning tunneling microscope tip.

Since nanorobots would be microscopic in size, it would probably be necessary for very large numbers of them to work together to perform microscopic and macroscopic tasks. These nanorobot swarms, both those incapable of replication (as in utility fog) and those capable of unconstrained replication in the natural environment (as in grey goo and its less common variants), are found in many science fiction stories, such as the Borg nanoprobes in Star Trek and The Outer Limits episodeThe New Breed.

Some proponents of nanorobotics, in reaction to the grey goo scare scenarios that they earlier helped to propagate, hold the view that nanorobots capable of replication outside of a restricted factory environment do not form a necessary part of a purported productive nanotechnology, and that the process of self-replication, if it were ever to be developed, could be made inherently safe. They further assert that their current plans for developing and using molecular manufacturing do not in fact include free-foraging replicators.

The most detailed theoretical discussion of nanorobotics, including specific design issues such as sensing, power communication, navigation, manipulation, locomotion, and onboard computation, has been presented in the medical context of nanomedicine by Robert Freitas. Some of these discussions remain at the level of unbuildable generality and do not approach the level of detailed engineering.

The joint use of nanoelectronics, photolithography, and new biomaterials provides a possible approach to manufacturing nanorobots for common medical applications, such as for surgical instrumentation, diagnosis and drug delivery. This method for manufacturing on nanotechnology scale is currently in use in the electronics industry.So, practical nanorobots should be integrated as nanoelectronics devices, which will allow tele-operation and advanced capabilities for medical instrumentation.

Nubot is an abbreviation for “nucleic acid robot.” Nubots are organic molecular machines at the nanoscale. DNA structure can provide means to assemble 2D and 3D nanomechanical devices. DNA based machines can be activated using small molecules, proteins and other molecules of DNA. Biological circuit gates based on DNA materials have been engineered as molecular machines to allow in-vitro drug delivery for targeted health problems.Such material based systems would work most closely to smart biomaterial drug system delivery,while not allowing precise in vivo teleoperation of such engineered prototypes.

Nanofactory Collaboration, founded by Robert Freitas and Ralph Merkle in 2000 and involving 23 researchers from 10 organizations and 4 countries, focuses on developing a practical research agenda specifically aimed at developing positionally-controlled diamond mechanosynthesisand a diamondoid nanofactory that would have the capability of building diamondoid medical nanorobots.

This approach proposes the use of biological microorganisms, like the bacterium Escherichia coli. Thus the model uses a flagellum for propulsion purposes. Electromagnetic fields normally control the motion of this kind of biological integrated device.

Open technology
A document with a proposal on nanobiotech development using open technology approaches has been addressed to the United Nations General Assembly. According to the document sent to the UN, in the same way that Open Source has in recent years accelerated the development ofcomputer systems, a similar approach should benefit the society at large and accelerate nanorobotics development. The use of nanobiotechnology should be established as a human heritage for the coming generations, and developed as an open technology based on ethical practices forpeaceful purposes. Open technology is stated as a fundamental key for such an aim.