The motion of the main arm is up and down. The robot can perform this motion by extending a cylinder that’s built into the arm. In most cylindrical robots, the up-and-down motion is provided by a pneumatic cylinder, and the rotation is generally provided by a motor and gears. 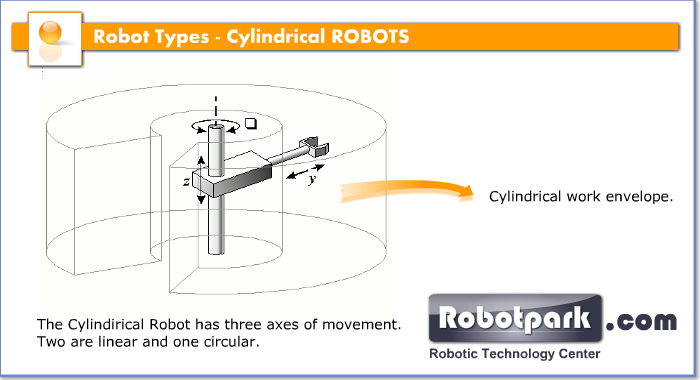 The origin of the system is the point where all three coordinates can be given as zero. This is the intersection between the reference plane and the axis.

The axis is variously called the cylindrical or longitudinal axis, to differentiate it from the polar axis, which is the ray that lies in the reference plane, starting at the origin and pointing in the reference direction.

Cylindrical coordinates are useful in connection with objects and phenomena that have some rotational symmetry about the longitudinal axis, such as water flow in a straight pipe with round cross-section, heat distribution in a metal cylinder, electromagnetic fields produced by an electric current in a long, straight wire, and so on.