An articulated robot is a robot with rotary joints (e.g. a legged robot or an industrial robot). Articulated robots can range from simple two-jointed structures to systems with 10 or more interacting joints. They are powered by a variety of means, including electric motors. 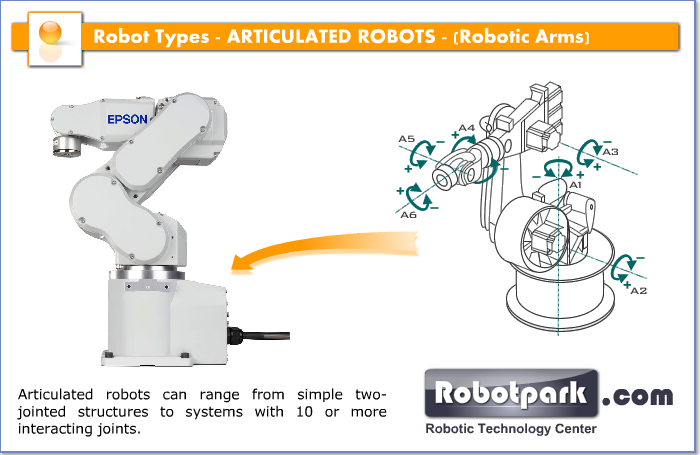 Some types of robots, such as robotic arms, can be articulated or non-articulated.

Articulated Robot: An articulated robot is one which uses rotary joints to access its work space. Usually the joints are arranged in a “chain”, so that one joint supports another further in the chain.

Continuous Path: A control scheme whereby the inputs or commands specify every point along a desired path of motion. The path is controlled by the coordinated motion of the manipulator joints.

Degrees Of Freedom (DOF): The number of independent motions in which the end effector can move, defined by the number of axes of motion of the manipulator.

Gripper: A device for grasping or holding, attached to the free end of the last manipulator link; also called the robot’s hand or end-effector.

Pick And Place Cycle:  Pick and place Cycle is the time, in seconds, to execute the following motion sequence:

Reach: The maximum horizontal distance from the center of the robot base to the end of its wrist.

Repeatability: The ability of a system or mechanism to repeat the same motion or achieve the same points when presented with the same control signals. The cycle-to-cycle error of a system when trying to perform a specific task

Resolution: The smallest increment of motion or distance that can be detected or controlled by the control system of a mechanism. The resolution of any joint is a function of encoder pulses per revolution and drive ratio, and dependent on the distance between the tool center point and the joint axis.

Robot Program: A robot communication program for personal computers. Provides terminal emulation and utility functions. This program can record all of the user memory, and some of the system memory to disk files.

Maximum Speed: The compounded maximum speed of the tip of a robot moving at full extension with all joints moving simultaneously in complimentary directions. This speed is the theoretical maximum and should under no circumstances be used to estimate cycle time for a particular application. A better measure of real world speed is the standard twelve inch pick and place cycle time. For critical applications, the best indicator of achievable cycle time is a physical simulation.

Servo Controlled: Controlled by a driving signal which is determined by the error between the mechanism’s present position and the desired output position.

Via Point: A point through which the robot’s tool should pass without stopping; via points are programmed in order to move beyond obstacles or to bring the arm into a lower inertia posture for part of the motion.

Work Envelope: A three-dimensional shape that defines the boundaries that the robot manipulator can reach; also known as reach envelope.