Swarm Robotics is a new approach to the coordination of multirobot systems which consist of large numbers of mostly simple physical robots. It is supposed that a desired collective behavior emerges from the interactions between the robots and interactions of robots with the environment. This approach emerged on the field ofartificial swarm intelligence, as well as the biological studies of insects, ants and other fields in nature, where swarm behaviour occurs. 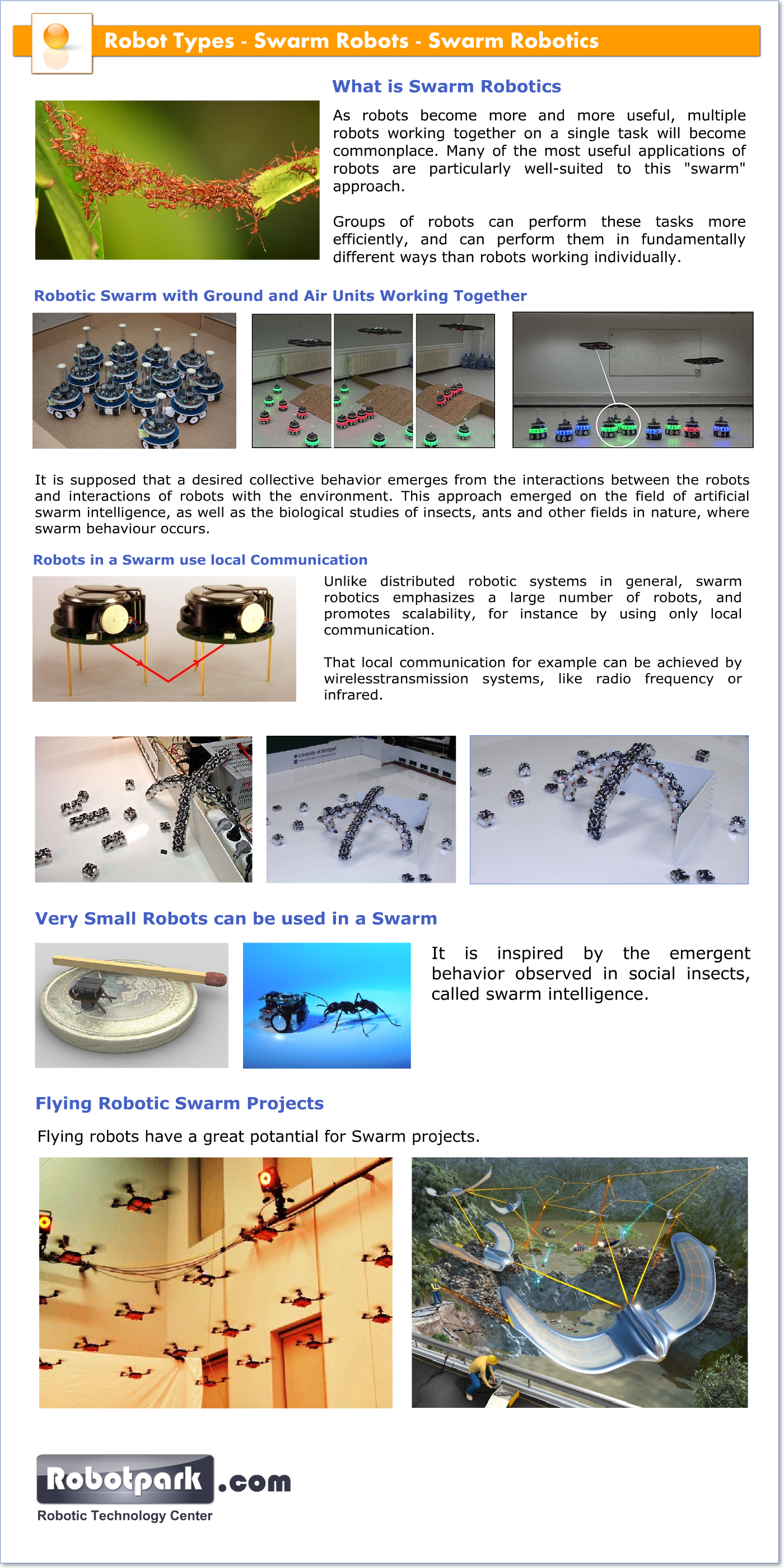 The research of swarm robotics is to study the design of robots, their physical body and their controlling behaviors. It is inspired but not limited by the emergent behavior observed in social insects, called swarm intelligence. Relatively simple individual rules can produce a large set of complex swarm behaviors. A key-component is the communication between the members of the group that build a system of constant feedback. The swarm behavior involves constant change of individuals in cooperation with others, as well as the behavior of the whole group.

Unlike distributed robotic systems in general, swarm robotics emphasizes a large number of robots, and promotes scalability, for instance by using only local communication. That local communication for example can be achieved by wirelesstransmission systems, like radio frequency or infrared.

Video tracking is an essential tool for systematically studying swarm-behavior, even though other tracking methods are available. Recently Bristol robotics laboratory developed an ultrasonic position tracking system for swarm research purposes. Further research is needed to find methodologies that allow the design and reliable prediction of swarm behavior when only the features of the individual swarm members are given.

What is a “Swarm”?
As robots become more and more useful, multiple robots working together on a single task will become commonplace. Many of the most useful applications of robots are particularly well-suited to this “swarm” approach. Groups of robots can perform these tasks more efficiently, and can perform them in fundamentally different ways than robots working individually. However, swarms of robots are difficult to program and coordinate.

Applications of Robot Swarms
There are many applications for swarms of robots. Multiple vacuum cleaner robots might need to share maps of areas where they’ve previously cleaned. A swarm of mars rovers might need to disperse throughout the environment to locate promising areas, while maintaining communications with each other. Robots used for earthquake rescue might come in three flavors: thousands of cockroach-sized scouts to infiltrate the debris and locate survivors, a few dozen rat-sized structural engineers to get near the scene and solve the “pick-up-sticks” problem of getting the rubble off, and a few brontosaurus-sized heavy-lifters to carry out the rescue plan.

In all these applications, individual robots must work independently, only communicating with other nearby robots. It is either too expensive (robot vacuums need to be very cheap), too far (it takes 15 minutes for messages to get to Mars), or impossible (radio control signals cannot penetrate into earthquake ruble) to control all of the robots from a centralized location. However, a distributed control system can let robots interact with other nearby robots, cooperating amongst themselves to accomplish their mission.