There are different types of swimming robots (or Robot Fishes). Here we examined some of these: 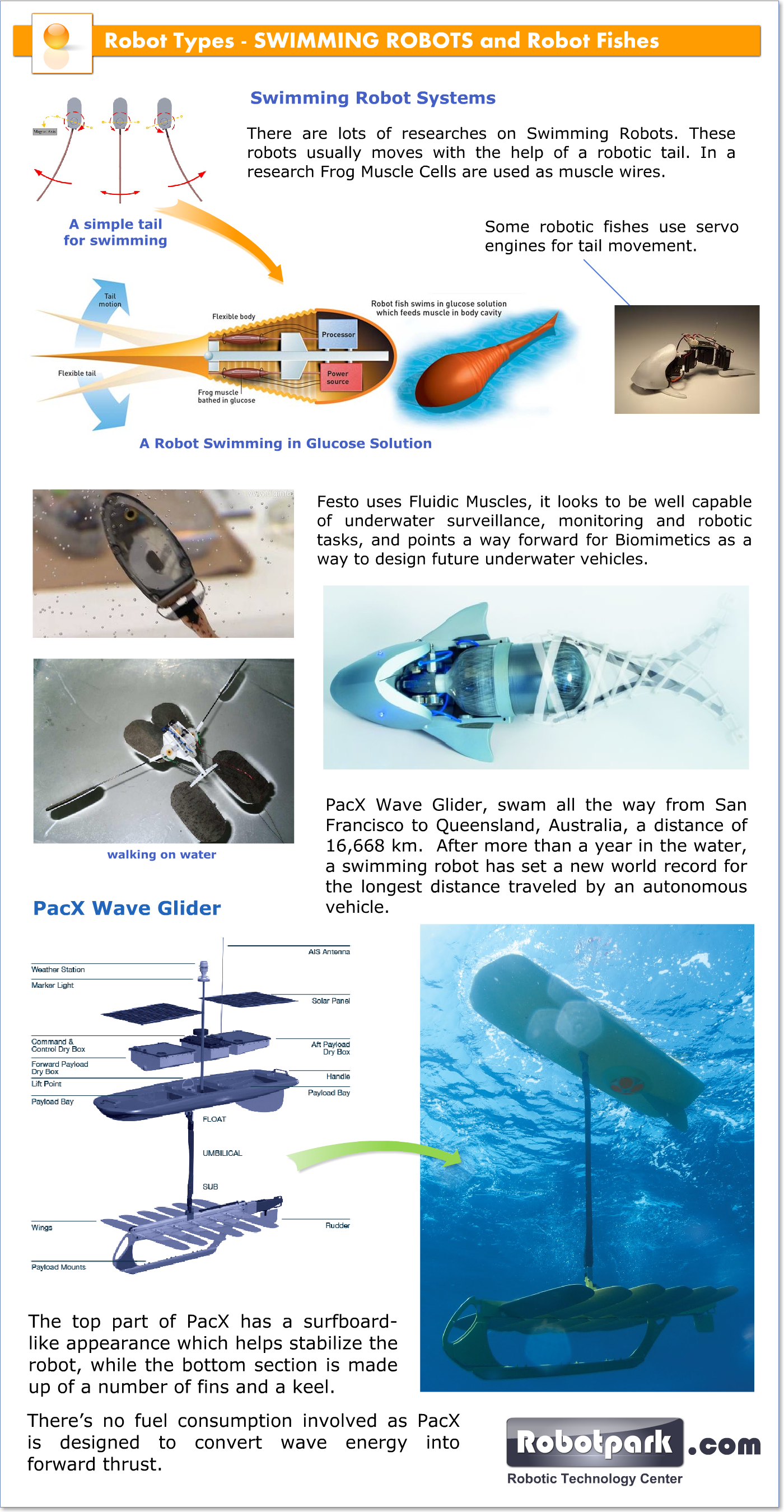 Also known as Papa Mau, swam all the way from San Francisco to Queensland, Australia, a distance of 9,000 nautical miles (16,668 kilometers). After more than a year in the water, a swimming robot has set a new world record for the longest distance traveled by an autonomous vehicle.

The company behind the project, US-based Liquid Robotics, used Papa Mau to gather “unprecedented amounts of high-resolution ocean data never before available over these vast distances or time-frames” to help scientists learn more about the condition and ecosystem of the Pacific.

During its  journey, the swimming robot weathered gale force storms, fended off the attention of sharks and navigated its way around the Great Barrier Reef before finally arriving in Queensland this week.

PacX comprises two main sections
-the top part has a surfboard-like appearance which helps stabilize the robot,
-the bottom section is made up of a number of fins and a keel.

There’s no fuel consumption involved as PacX is designed to convert wave energy into forward thrust.

Liquid Robotics still has another three robots at sea – one is heading for Australia while the other two are on their way to Japan.

Most remarkable has to have been the fish, which swam round large tanks on the Festo stand under radio control, spitting bubbles at passers by. As well as demonstrating the capabilities of the company’s Fluidic Muscles and robotic controls, it looks to be well capable of underwater surveillance, monitoring and robotic tasks, and points a way forward for Biomimetics as a way to design future underwater vehicles.

Japanese researchers are building a human-like robotic swimmer that could help athletes swim faster, or at least wear speedier swimsuits. Among other things, the Swumanoid will give researchers insight into the propulsive force created by a swimmer’s hands, which is difficult to gauge with sensors on an actual human.

The robot is modeled after a competitive swimmer, built to half scale. Waterproof motors reproduce swimming motions. It currently swims about three times slower than the current 100-meter freestyle record-holder, Brazilian Cesar Cielo. Nakashima said the robot will find use in sports research. It might also serve as a rescue robot. Given other developments on the robot lifeguard front, it’s beginning to look like a favorite summer job is about to be automated.