e-David, our painting machine, uses visual feedback to create different kinds of paintings. We equipped a standard robot with all necessary means for painting. Five different brushes can be used, color can be selected from a repository with 24 colors, brushes can be cleaned and colors can be distributed precisely on the canvas.

The machine watches itself while painting and decides indepentently where to add new strokes. This way paintings are created that are not completely defined by the programmer but are the result of a visual optimization process. (informatik.uni-konstanz.de/en/edavid/news/)

Our hypothesis is that painting – at least the technical part of painting – can be seen as optimization processes in which color is manually distributed on a canvas until the painter is able to recognize the content – regardless if it is a representational painting or not. Optimization happens intuitively during the drawing process and is highly dependent on the medium and its restrictions. Centuries of so-called academic art have been shown to what extent algorithms for spatial division as well as color and content composition can be used for creating art works.

On the other side computer graphics, and especially in so-called non-photorealistic rendering made a lot of progress in imitating painting styles using the computer. By simulating media and stroke composition a lot of painting-like images were produced, typically by computing pixel information that later was printed on a conventional printer. E-David will substitute this by distributing real color on real canvas and thus will enable us to enclose the whole process of drawing production into an optimization framework. This will allow us to investigate human “optimization schemes” and to find out to what extent such schemes can be formulated using algorithms. We will use iterated optimization schemes to produce color distributions on the canvas which are constrained by given styles. Semantic information can be integrated to optimize representational paintings; a tree will be painted in a different way than a face even if the colors are similar. Such semantic information can be obtained from semantic image analysis of the given target image. A number of other questions arise immediately:

It is of general interest to find out to what extent a machine is able to learn the whole process of creating a painting. The results might even influence our perception of what art is – besides the imitation of existing drawing styles (imagine what Seurat would have been thinking about a robot that helped him with the millions of dots) the machine might enable new techniques since labor plays no role any more. This way very complex visual art works can be created. The software and hardware platform will be open to artists, which can realize art works on a Java-based/processing environment.

The setup can be used for the analysis of existing art works and painting styles. The robot enables us to execute brush strokes in a precisely timed sequence. This will allow us to set up experiments for color mixture and ordering of brush strokes. Accomplished by appropriate image analysis techniques this might allow us investigating the temporal development of artworks (and even the detection of forgeries).

Algorithms for learning the usage of drawing tools and their visual control are prototypical for a more general class of optimization methods that can be applied in different areas of CIM. Examples are welding and painting robots, especially in small businesses in which efficient reprogramming and adaptation of robot programs is necessary.

Computer models for color description, their mixture and interaction with the canvas are still very limited. Existing approaches allow this only to a limited extent, especially if complex materials are used. There are no methods to compare computer simulations and real artifacts, this also hinders a thorough evaluation. Within the e-David project we will continuously supervise the paint application. However, this supervision is not trivial since real paint has a number of 3D effects, specular reflection and other disturbing properties. A special setup with polarized light from small angles is used to overcome these problems, we will calibrate the images by using spectroscopic methods. 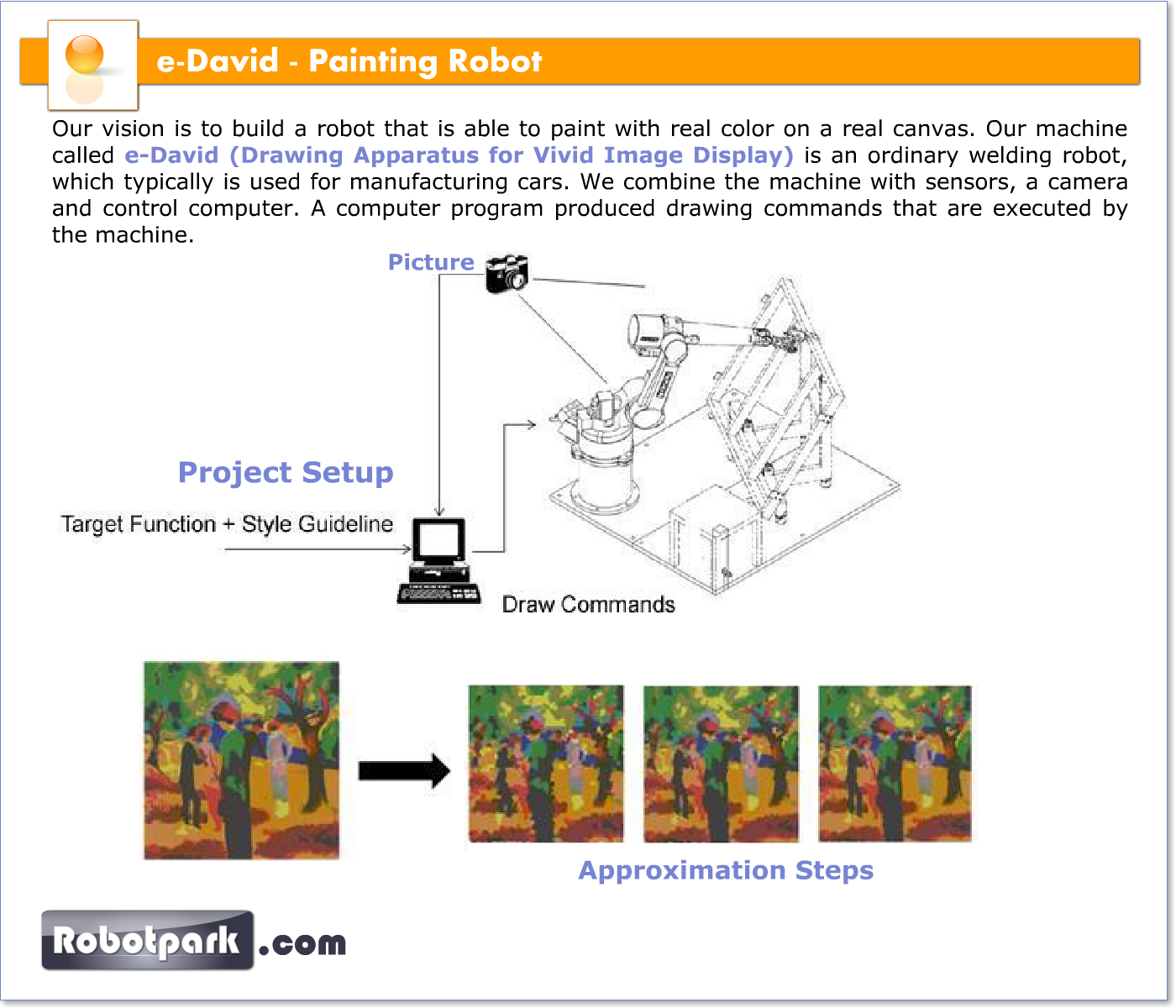 When you watch an artist paint, individual brush strokes can seem random. It’s often not until close to the very end that the image the painter is after becomes clear. This is doubly true when you watch e-David, the robot painter, at work. David, which stands for “Drawing Apparatus for Vivid Image Display,” was created by a team of engineers at the University of Konstanz in Germany.

He’s a former welding robot who has been retrofitted to reproduce, brush stroke by brush stroke, existing works of art. The robotic arm has access to five different brushes and 25 colors of paint, and after each dab of paint, it takes a photograph of what it has painted so far- computer software analyzes the photograph and tells David where to place the next brush stroke. The strangeness of the process is especially evident when David signs his name at the end.

As you can see in this video, he begins by making the dot over the “i” and then writes the rest of his name backwards- hardly how you or I would do it, and a clear reminder that- once someone else has given you the idea- there’s more than one way to make the Mona Lisa.