RHex Does Parkour All Over UPenn

RHex is an all-terrain walking robot that could one day climb over rubble in a rescue mission or cross the desert with environmental sensors strapped to its back. Pronounced “Rex,” like the over-excited puppy it resembles when it is bounding over the ground, RHex is short for “robot hexapod,” a name that stems from its six springy legs.

Legs have an advantage over wheels when it comes to rough terrain, but the articulated legs often found on walking robots require complex, specialized instructions for each moving part. To get the most mobility out of RHex’s simple, one-jointed legs, Penn researchers are essentially teaching the robot Parkour. Taking inspiration from human free-runners, the team is showing the robot how to manipulate its body in creative ways to get around all sorts of obstacles.

The RHex platform was first developed through a multi-university collaboration more than a decade ago. Graduate student Aaron Johnson and professor Daniel Koditschek, both of the Department of Electrical and Systems Engineering in the School of Engineering and Applied Science, are working on a version of RHex known as XRL, or X-RHex Lite. This lighter and more agile version of the robot, developed in Koditschek’s Kod*Lab, a division of Engineering’s General Robotics, Automation, Sensing and Perception (GRASP) Lab, is ideal for testing new ways for it to run, jump, and climb.

By activating its legs in different sequences, XRL can execute double jumps, flips, and, through a combination of moves, even pull-ups. For the tallest obstacles, the robot can launch itself vertically, hook its front legs on the edge of the object it’s trying to surmount, then drag its body up and over. The researchers fully demonstrated this particular maneuver under more controlled conditions in the lab.

The paper where Johnson and Koditschek outlined these capabilities—”Toward a Vocabulary of Legged Leaping“—was selected as a finalist for best student paper at the IEEE International Conference on Robotics and Automation in May. 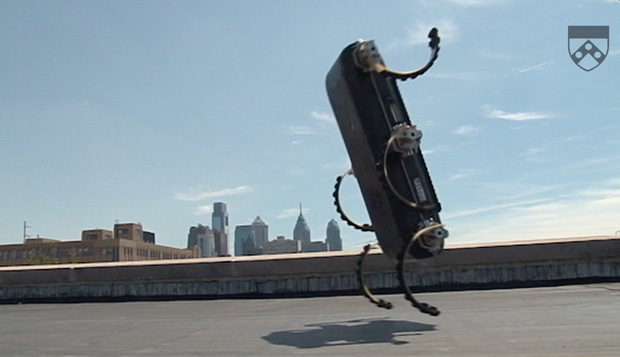 “What we want is a robot that can go anywhere, even over terrain that might be broken and uneven,” Johnson says. “These latest jumps greatly expand the range of what this machine is capable of, as it can now jump onto or across obstacles that are bigger than it is.”

RHex has been practicing its jumping skills, and UPenn has a tremendous new video of the robot doing Parkour across campus rooftops.

Was one of these moves particularly difficult to pull off? If so, why, and how’d you solve it?

The double jump across a gap is probably the hardest, in addition to being one of the more dangerous. There are some interesting trade-offs when it comes to gap jumping: do you want to start closer to the gap so you don’t have to jump as far, or do you want to start farther back so you can get full traction with all of your legs? In the end, it helps to sneak up as close as you can to the edge while still getting some amount of torque out of the middle legs on that second bounce. Backing up farther to let the front legs help ended up being a little worse.

One move that didn’t make it is the pull-up onto the table’s edge. That move is still much too hard to do outdoors, and relies on very subtle leg stretching and ground interactions that we are in the process of modeling more carefully.

What are some ways that you might be able to make RHex faster than a speeding bullet and able to leap tall buildings in a single bound?

Well, we can already leap onto ledges in a single bound that are tall compared to the robot, but in order to really push the performance of a robot such as RHex it helps to have a very good actuator model. The motors in this robot are rated to about 2-3A continuous current, but to get these moves I’ve set the current limit at 20A. This means that they heat up quite quickly, but with a good thermal model we can monitor the motor core temperature and ensure that for these quick leaps they stay within the thermal limits. For the worst of these jumps, we know that the motor core heats up by 50C in less than half a second. Knowing how far you can push your robot is key to getting these kinds of peak performance behaviors.

Will this project be extended? If so, what are you working on next, and what are your long-term hopes/dreams/fantasies for RHex?
Yes, this project is ongoing, and one of the challenges that I’m excited to try and tackle is running transitions. Most of these dynamic transitions start from rest, but we have some early results with running flips that look promising. We are also eager to take these behaviors out to the desert where we’ve done some testing with RHex in the past. These behaviors should enable RHex to access even more of the terrain out there.

Any chance of seeing some outtakes? I bet there are some good ones!
The outtakes are pretty painful, if you have any empathy for the robot. In truth RHex can take quite a beating and still run most of the time, but it is hard to watch. We may post some outtakes in the future, for now though we will be posting a longer version of this video with extended clips and some additional angles that didn’t make it into the final cut.