A belt is a loop of flexible material used to mechanically link two or more rotating shafts. Belts may be used as
-a source of motion,
-to transmit power efficiently,
-or to track relative movement.

Belts are looped over pulleys. In a two pulley system, the belt can either drive the pulleys in the same direction, or the belt may be crossed, so that the direction of the shafts is opposite. As a source of motion, a conveyor belt is one application where the belt is adapted to continuously carry a load between two points. Pulleys and Belts transfer rotating motion from one shaft to another. Essentially, pulleys are gears without teeth that depend on the frictional forces of connecting belts, chains, ropes, or cables to transfer torque. If both pulleys have the same diameter, they will rotate at the same speed. However, if one pulley is larger than the other, mechanical advantage and velocity ratio are gained. As with gears, the velocities of pulleys are inversely proportional to their diameters. A large drive pulley driving a smaller driven pulley by means of a belt or chain is shown in Figure . The smaller pulley rotates faster than the larger pulley in the same direction as shown in Figure A. If the belt is crossed, as shown in Figure B, the smaller pulley also rotates faster than the larger pulley, but its rotation is in the opposite direction.

A familiar example of belt and pulley drive can be seen in automotive cooling fan drives. A smooth pulley connected to the engine crankshaft transfers torque to a second smooth pulley coupled to the cooling fan with a reinforced rubber endless belt. Before reliable direct-drive industrial electric motors were developed, a wide variety of industrial machines equipped with smooth pulleys of various diameters were driven by endless leather belts from an overhead driveshaft. Speed changes were achieved by switching the belt to pulleys of different diameters on the same machine.

The machines included lathes and milling machines, circular saws in sawmills, looms in textile plants, and grinding wheels in grain mills. The source of power could have been a water wheel, windmill, or a steam engine. 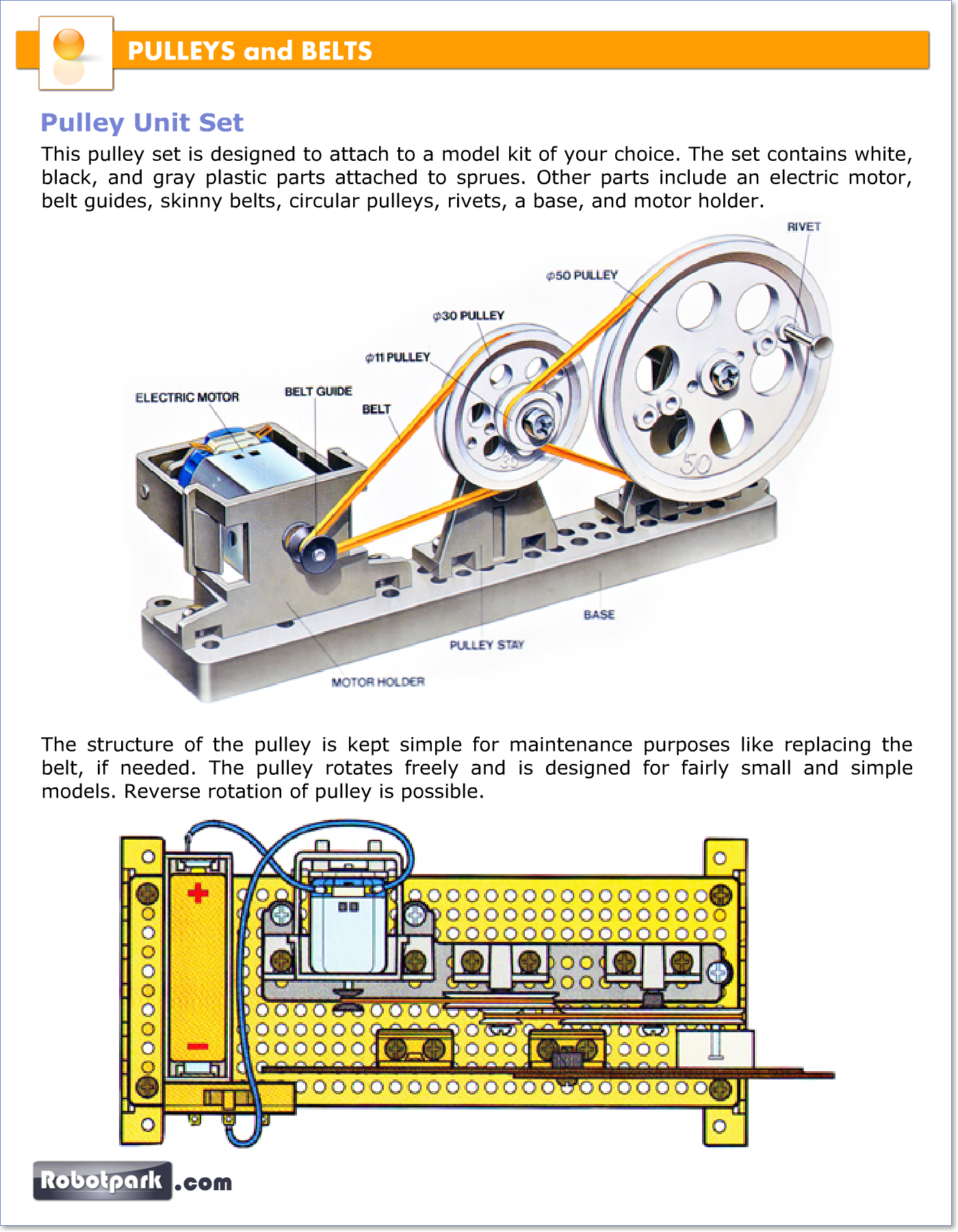 Pros and Cons of Belts

-Belt drive is simple, inexpensive, and does not require axially aligned shafts.
-It helps protect the machinery from overload and jam, and damps and isolates noise and vibration.
-Load fluctuations are shock-absorbed (cushioned).
-They need no lubrication and minimal maintenance.
-They have high efficiency (90-98%, usually 95%), high tolerance for misalignment, and are inexpensive if the shafts are far apart.
-Clutch action is activated by releasing belt tension.
-Different speeds can be obtained by step or tapered pulleys.

-The angular-velocity ratio may not be constant or equal to that of the pulley diameters, due to slip and stretch.
-However, this problem has been largely solved by the use of toothed belts.
-Temperatures ranges from −31 °F (−35 °C) to 185 °F (85 °C).
-Adjustment of center distance or addition of an idler pulley is crucial to compensate for wear and stretch. Flat belts were widely used in the 19th and early 20th centuries in line shafting to transmit power in factories. They were also used in countless farming, mining, and logging applications, such as bucksaws, sawmills, threshers, silo blowers, conveyors for filling corn cribs or haylofts, balers, water pumps (for wells, mines, or swampy farm fields), and electrical generators. Flat belts are still used today, although not nearly as much as in the line shaft era. The flat belt is a simple system of power transmission that was well suited for its day.

It can deliver high power at high speeds (500 hp at 10,000 ft/min), in cases of wide belts and large pulleys. But these drives are bulky, requiring high tension leading to high loads, and are poorly suited to close-centers applications, so vee belts have mainly replaced flat-belts for short-distance power transmission; and longer-distance power transmission is typically no longer done with belts at all. For example, factory machines now tend to have individual electric motors.

Because flat belts tend to climb towards the higher side of the pulley, pulleys were made with a slightly convex or “crowned” surface (rather than flat) to allow the belt to self-center as it runs. Flat belts also tend to slip on the pulley face when heavy loads are applied, and many proprietary belt dressings were available that could be applied to the belts to increase friction, and so power transmission.

Flat belts were traditionally made of leather or fabric. Today some are made of rubber or polymers. Grip of leather belts is often better if they are assembled with the hair side (outer side) of the leather against the pulley, although some belts are instead given a half-twist before joining the ends (forming a Möbius strip), so that wear can be evenly distributed on both sides of the belt. Belts ends are joined by lacing the ends together with leather thonging, steel comb fasteners,or glued splices (with thonging being the oldest of the methods). Flat belts were traditionally jointed, and still usually are, but they can also be made with endless construction. 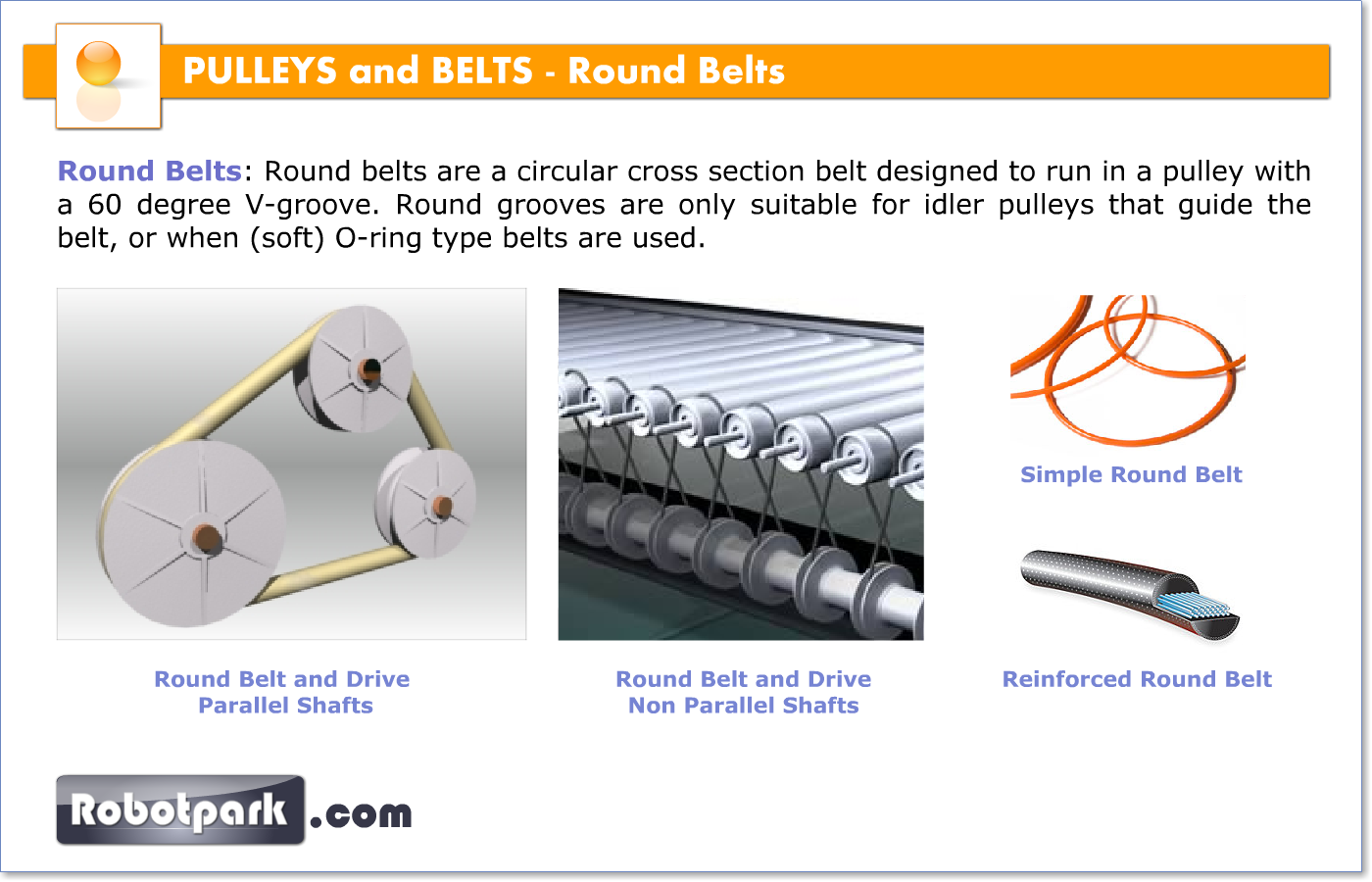 Round belts are a circular cross section belt designed to run in a pulley with a 60 degree V-groove. Round grooves are only suitable for idler pulleys that guide the belt, or when (soft) O-ring type belts are used. The V-groove transmits torque through a wedging action, thus increasing friction. Nevertheless, round belts are for use in relatively low torque situations only and may be purchased in various lengths or cut to length and joined, either by a staple, a metallic connector (in the case of hollow plastic), glueing or welding (in the case of polyurethane). Early sewing machines utilized a leather belt, joined either by a metal staple or glued, to great effect. 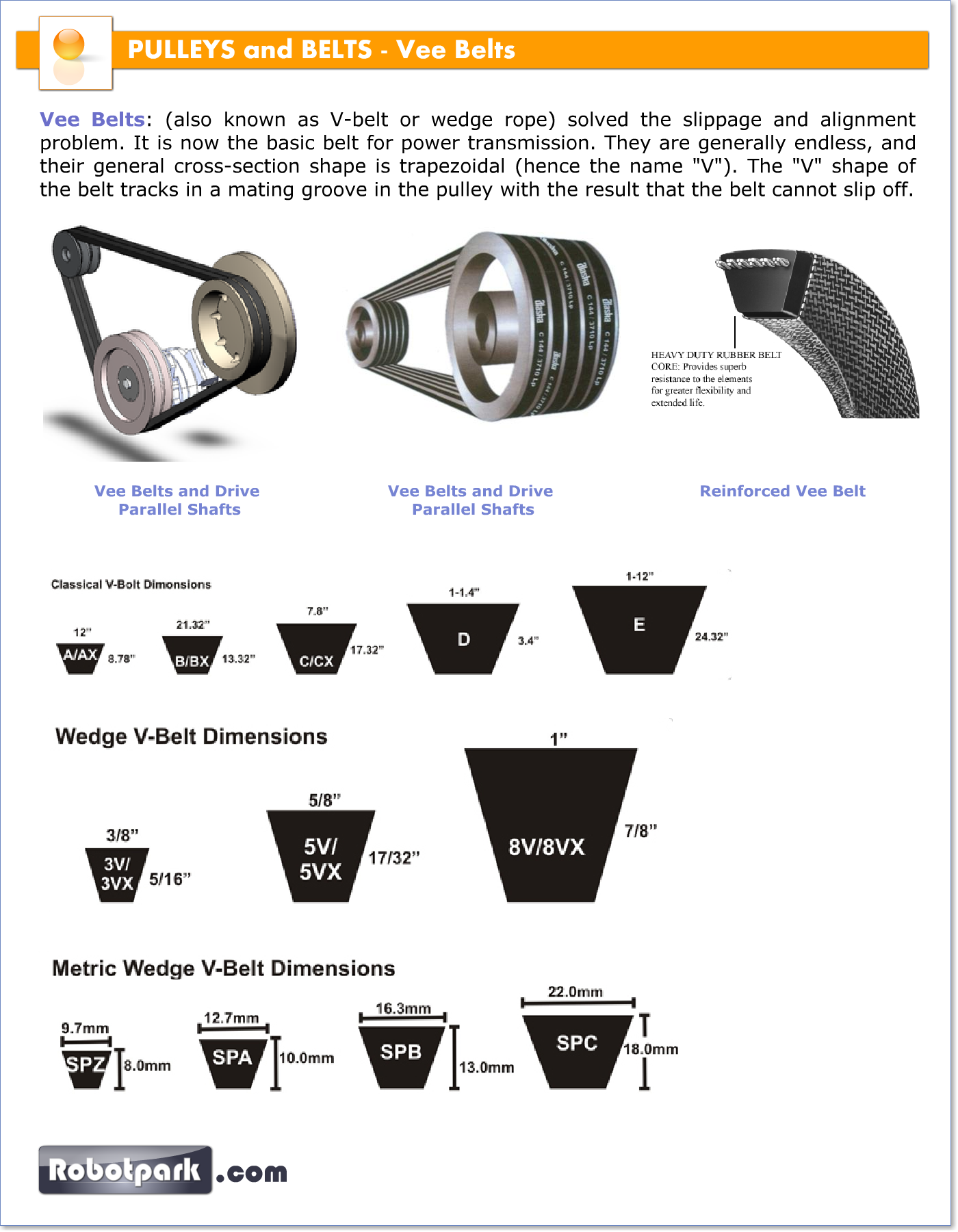 Vee belts (also known as V-belt or wedge rope) solved the slippage and alignment problem. It is now the basic belt for power transmission. They provide the best combination of traction, speed of movement, load of the bearings, and long service life. They are generally endless, and their general cross-section shape is trapezoidal (hence the name “V”). The “V” shape of the belt tracks in a mating groove in the pulley (or sheave), with the result that the belt cannot slip off. The belt also tends to wedge into the groove as the load increases—the greater the load, the greater the wedging action—improving torque transmission and making the V-belt an effective solution, needing less width and tension than flat belts. V-belts trump flat belts with their small center distances and high reduction ratios. The preferred center distance is larger than the largest pulley diameter, but less than three times the sum of both pulleys. Optimal speed range is 1000–7000 ft/min. V-belts need larger pulleys for their larger thickness than flat belts.

For high-power requirements, two or more vee belts can be joined side-by-side in an arrangement called a multi-V, running on matching multi-groove sheaves. This is known as a multiple-V-belt drive (or sometimes a “classical V-belt drive”).

V-belts may be homogeneously rubber or polymer throughout, or there may be fibers embedded in the rubber or polymer for strength and reinforcement. The fibers may be of textile materials such as cotton, polyamide (such as Nylon) or polyester or, for greatest strength, of steel or aramid (such as Twaron or Kevlar).

When an endless belt does not fit the need, jointed and link V-belts may be employed. However they are weaker and only usable at speeds up to 4000 ft/min. A link v-belt is a number of rubberized fabric links held together by metal fasteners. They are length adjustable by disassembling and removing links when needed.

A multi-groove or polygroove belt is made up of usually 5 or 6 “V” shapes alongside each other. This gives a thinner belt for the same drive surface, thus it is more flexible, although often wider. The added flexibility offers an improved efficiency, as less energy is wasted in the internal friction of continually bending the belt. In practice this gain of efficiency causes a reduced heating effect on the belt and a cooler-running belt lasts longer in service.

A further advantage of the polygroove belt that makes them popular is that they can run over pulleys on the ungrooved back of the belt. Though this is sometimes done with Vee belts with a single idler pulley for tensioning, a polygroove belt may be wrapped around a pulley on its back tightly enough to change its direction, or even to provide a light driving force.

Any Vee belt’s ability to drive pulleys depends on wrapping the belt around a sufficient angle of the pulley to provide grip. Where a single-Vee belt is limited to a simple convex shape, it can adequately wrap at most three or possibly four pulleys, so can drive at most three accessories. Where more must be driven, such as for modern cars with power steering and air conditioning, multiple belts are required. As the polygroove belt can be bent into concave paths by external idlers, it can wrap any number of driven pulleys, limited only by the power capacity of the belt.

This ability to bend the belt at the designer’s whim allows it to take a complex or “serpentine” path. This can assist the design of a compact engine layout, where the accessories are mounted more closely to the engine block and without the need to provide movable tensioning adjustments. The entire belt may be tensioned by a single idler pulley.

A ribbed belt is a power transmission belt featuring lengthwise grooves. It operates from contact between the ribs of the belt and the grooves in the pulley. Its single-piece structure is reported to offer an even distribution of tension across the width of the pulley where the belt is in contact, a power range up to 600 kW, a high speed ratio, serpentine drives (possibility to drive off the back of the belt), long life, stability and homogeneity of the drive tension, and reduced vibration. The ribbed belt may be fitted on various applications : compressors, fitness bikes, agricultural machinery, food mixers, washing machines, lawn mowers, etc. 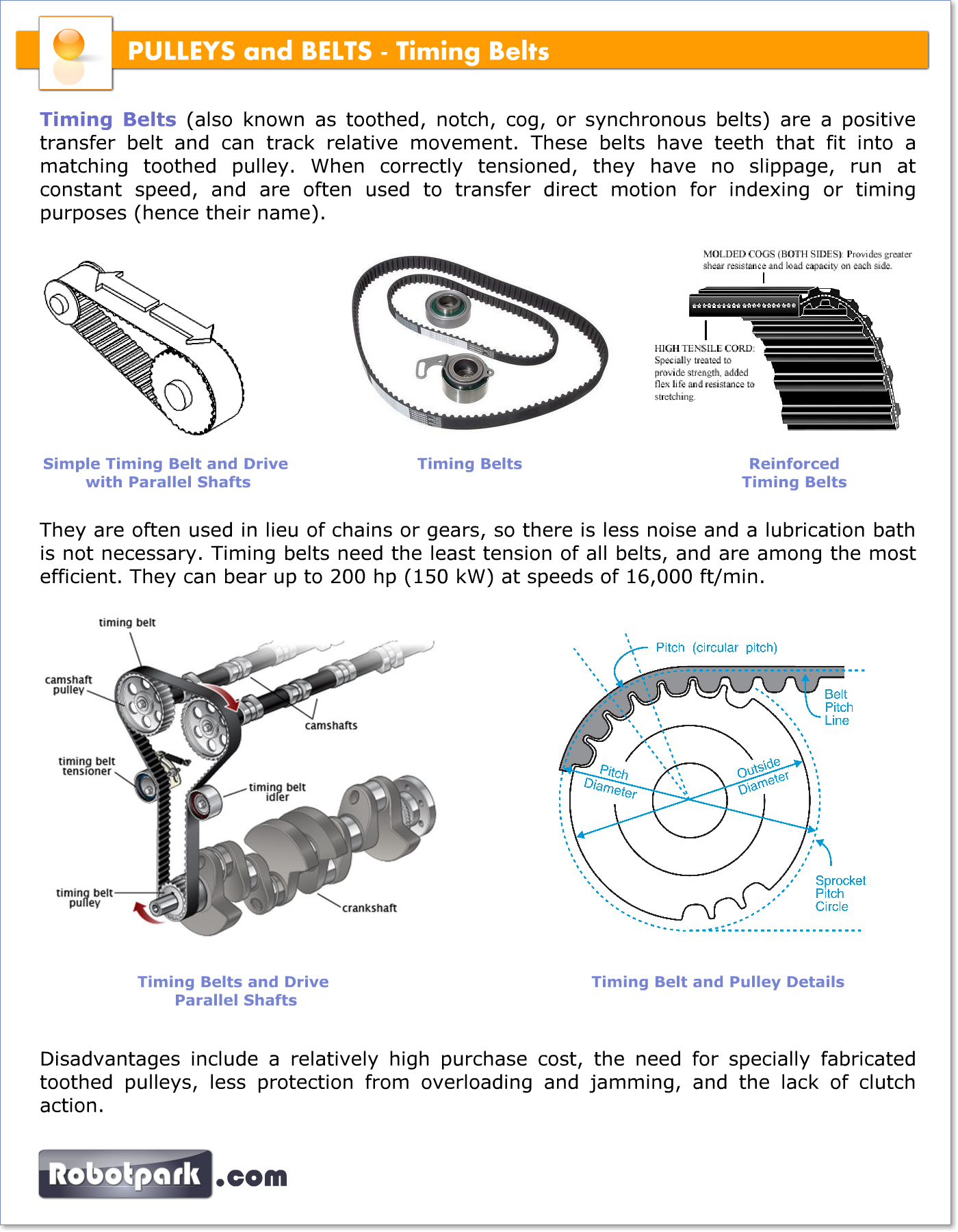 Timing belts, (also known as toothed, notch, cog, or synchronous belts) are a positive transfer belt and can track relative movement. These belts have teeth that fit into a matching toothed pulley. When correctly tensioned, they have no slippage, run at constant speed, and are often used to transfer direct motion for indexing or timing purposes (hence their name). They are often used in lieu of chains or gears, so there is less noise and a lubrication bath is not necessary. Camshafts of automobiles, miniature timing systems, and stepper motors often utilize these belts. Timing belts need the least tension of all belts, and are among the most efficient. They can bear up to 200 hp (150 kW) at speeds of 16,000 ft/min.

Disadvantages include a relatively high purchase cost, the need for specially fabricated toothed pulleys, less protection from overloading and jamming, and the lack of clutch action. 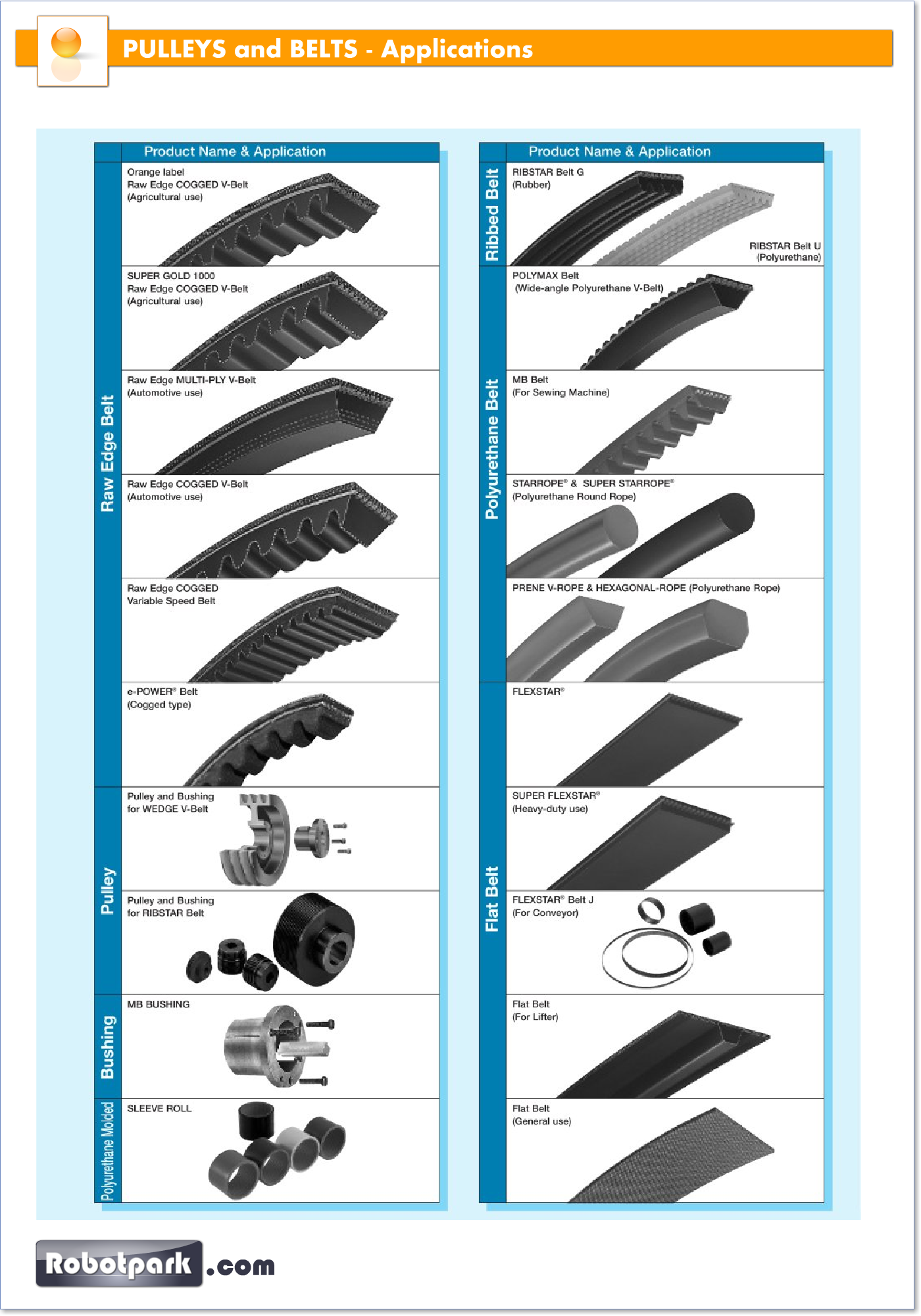