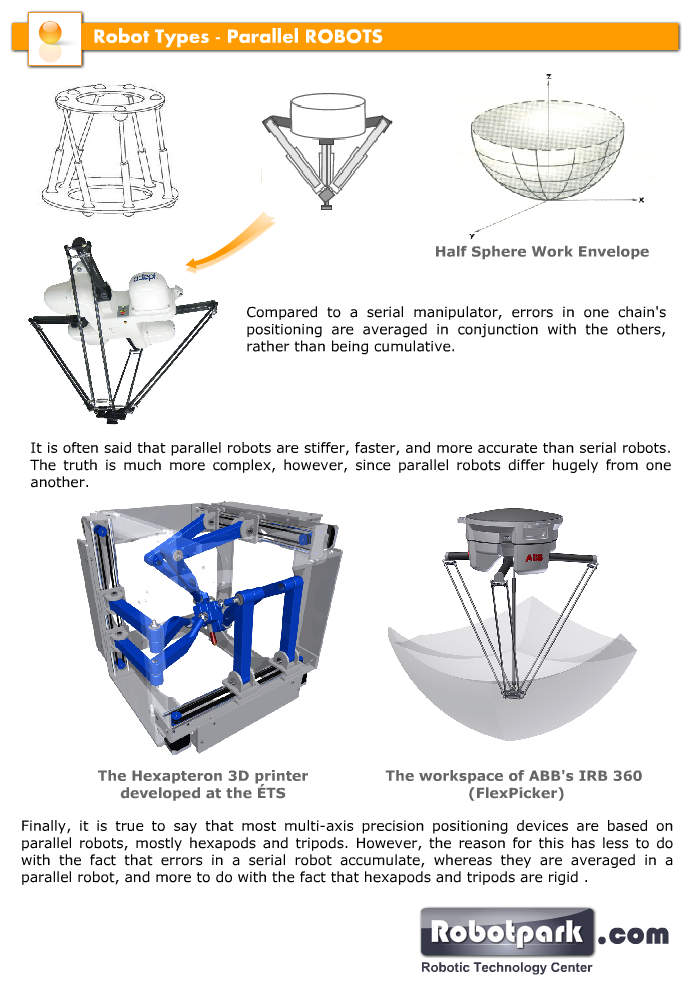 Also known as parallel robots, these systems are articulated robots that use similar mechanisms for the movement of either the robot on its base, or one or more manipulator arms. Their ‘parallel’ distinction, as opposed to a serial manipulator, is that the end effector (or ‘hand’) of this linkage (or ‘arm’) is connected to its base by a number of (usually three or six) separate and independent linkages working in parallel. ‘Parallel’ is used here in the topological sense, rather than the geometrical; these linkages act together, but it is not implied that they are aligned as parallel lines.

‘Parallel” is used here in the topological sense, rather than the geometrical; these linkages act together, but it is not implied that they are aligned as parallel lines.

A parallel manipulator is designed so that each chain is usually short, simple and can thus be rigid against unwanted movement, compared to a serial manipulator. Errors in one chain’s positioning are averaged in conjunction with the others, rather than being cumulative. Each actuator must still move within its own degree of freedom, as for a serial robot; however in the parallel robot the off-axis flexibility of a joint is also constrained by the effect of the other chains. It is this closed-loop stiffness that makes the overall parallel manipulator stiff relative to its components, unlike the serial chain that becomes progressively less rigid with more components.

This mutual stiffening also permits simple construction: Stewart platform hexapods chains use prismatic joint linear actuators between any-axis universal ball joints. The ball joints are passive: simply free to move, without actuators or brakes; their position is constrained solely by the other chains. Delta robots have base-mounted rotary actuators that move a light, stiff, parallelogram arm. The effector is mounted between the tips of three of these arms and again, it may be mounted with simple ball-joints. Static representation of a parallel robot is often akin to that of a pin-jointed truss: the links and their actuators feel only tension or compression, without any bending or torque, which again reduces the effects of any flexibility to off-axis forces.

A further advantage of the parallel manipulator is that the heavy actuators may often be centrally mounted on a single base platform, the movement of the arm taking place through struts and joints alone. This reduction in mass along the arm permits a lighter arm construction, thus lighter actuators and faster movements. This centralisation of mass also reduces the robot’s overall moment of inertia, which may be an advantage for a mobile or walking robot.

All these features result in manipulators with a wide range of motion capability. As their speed of action is often constrained by their rigidity rather than sheer power, they can be fast-acting, in comparison to serial manipulators.

Most robot applications require rigidity. Serial robots may achieve this by using high-quality rotary joints that permit movement in one axis but are rigid against movement outside this. Any joint permitting movement must also have this movement under deliberate control by an actuator. A movement requiring several axes thus requires a number of such joints. Unwanted flexibility or sloppiness in one joint causes a similar sloppiness in the arm: there is no opportunity to brace one joint’s movement against another. Their inevitable hysteresis and off-axis flexibility accumulates along the arm’s kinematic chain; a precision arm is a compromise between precision, complexity and cost of these joints.

A major drawback of parallel manipulators, in comparison to serial manipulators, is their limited workspace, because the legs can collide and, in addition (for the hexapod) each leg has five passive joints that each have their own mechanical limits. Another drawback of parallel robots is that they lose stiffness in singular positions completely (The robot gains finite or infinite degrees of freedom which are uncontrolable; it becomes shaky or mobile). This means that the Jacobian matrix, which is the mapping from joint space to Euclidian space, becomes singular (the rank decreases from six).

Major industrial applications of these devices are:

-in high speed, high-accuracy positioning with limited workspace, such as in assembly of PCBs
-as micro manipulators mounted on the end effector of larger but slower serial manipulators
-as high speed/high-precision milling machines

Parallel robots are usually more limited in the workspace; for instance, they generally cannot reach around obstacles. The calculations involved in performing a desired manipulation (forward kinematics) are also usually more difficult and can lead to multiple solutions.