Kinematics is a modular robotic construction kit, consisting of kinetic modules and adaptor blocks, which can be connected freely and without the use of cables. Kinematics is suitable for children from the age of 5 years and upwards, and with no computer skills being necessary, they may build interactive robots which have the ability to move.

Exploring and playing with the Kinematic Blocks introduces children to the world of mechanics, sensors and renewable energy. The construction kit is a highly entertaining and useful teaching tool with an intuitive interface. The adaptor blocks enable Kinematics to be connected to other leading construction kits. 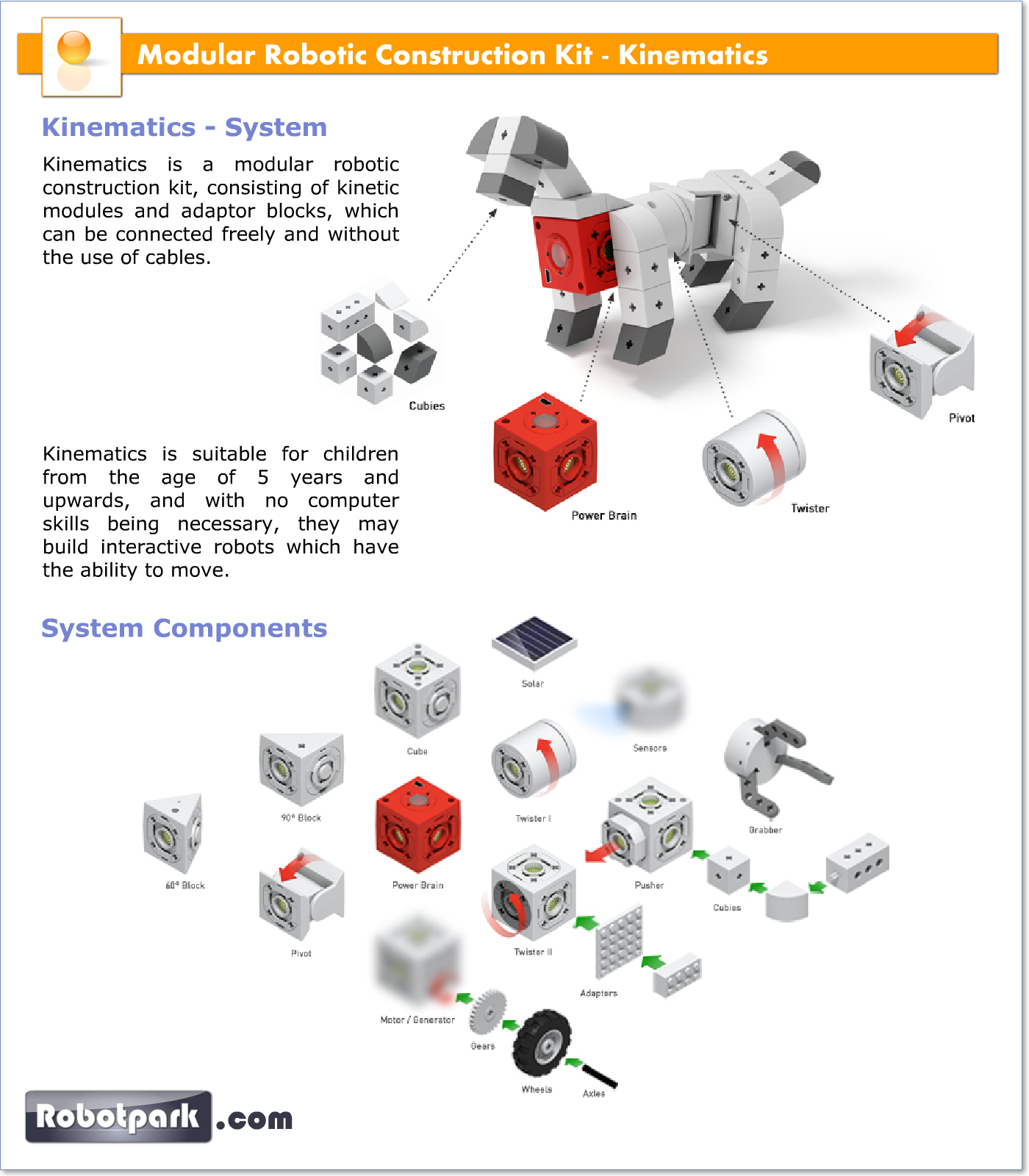 The highly creative modular robotic system, Kinematics, allows a wide range of applications. It is possible to construct models based on bionics as well as autonomously moving vehicles – anything is possible. Only a few examples are available now but in the next couple months many new models will be added. 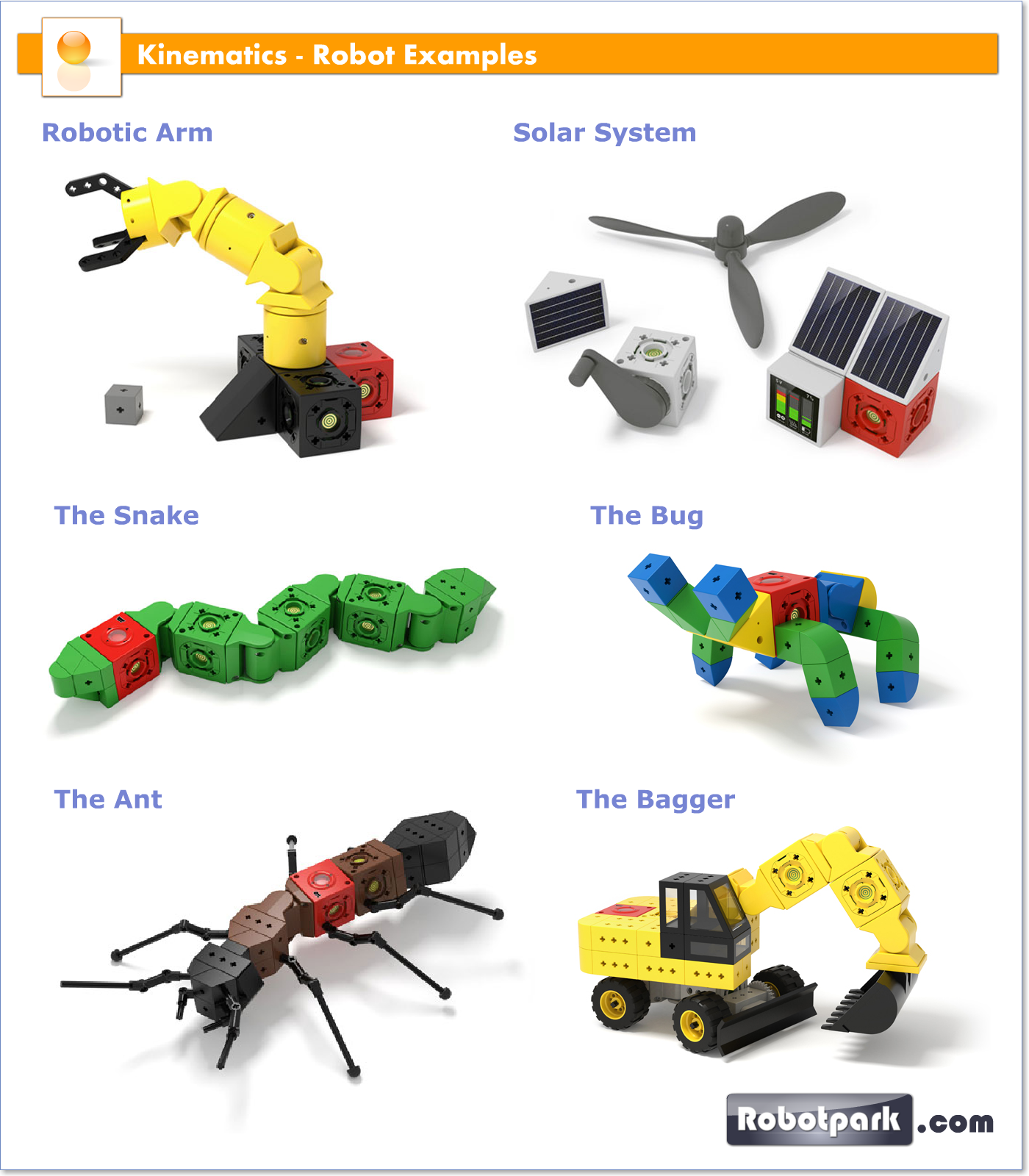 In addition to the extant basic construction kit we intend to offer a series of additional kits, which will enable the user to add specialized motion modules and passive components. These additions will greatly extend the design possibilities and opens a whole new world to kinematics users. The range of possibilities will be grouped in different themed sets, which will cover topics such as: renewable energies, sensor technology as well as the field of bionics. Special purpose modules, including solar panels, grabbing tools or sensor modules are currently in the development stage but will be available soon. The following robot examples will give you an idea of the whole Kinematics range.

To enhance the modular robotic system, Kinematics offers various additional components to enable children (from the age of 8 years) to build more complex mobile models. Besides small gear drive components, tooth belts and steering wheels are planned. This will enable the user to build very detailed models, closer to reality. By playing with the robotic construction kit and exploring different types of movement, children attain substantial knowledge about the world of movement, mechanics and robotics.

The Kinematics Construction Kit was invented by Leonhard Oschütz at the Bauhaus University Weimar (field of studies: Product Design, supervisor: Prof. Wolfgang Sattler) in 2009. As a part of a semester project Leo built a first prototype (Prototype I), patented it and presented it at various international conferences and trade fairs.

During his master’s thesis in 2011, and in close collaboration with the University of Applied Science, Jena, Prototype I was then further developed to Prototype II. This process involved visual and structural revision of all the modules. A small batch was finally injection molded, assembled and ready to test. The new features of Prototype II were patented in the summer of 2012.

Since late 2011 Leo, Matthias and Christian have been working together on the project. The team is supervised by “Gründerwerkstatt NEUDELI, Weimar” and acquired an EXIST-start-up grant from the European Union and plan to set up a limited company, as a spin-off, within the next few months. The aim of this company is the product development of the construction kit and the exploitation of Kinematics IP rights under a licensing agreement. 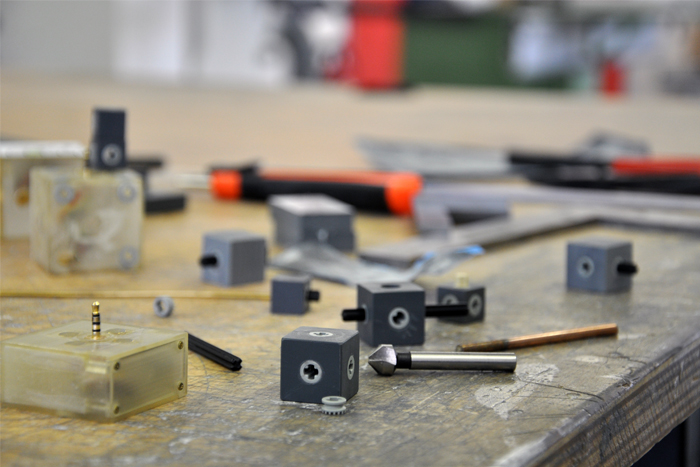