This partially 3D-printed prototype can be produced for less than $1,000, much less than commercial utility line robots.

You only need to experience another blackout for a reminder of the importance of power grid maintenance. Robots that crawl along and inspect power lines could save utilities a bundle in preventive checks.  We’ve seen a few designs for machines that can take on this dangerous and tricky job, such as Hydro-Quebec’s LineScout, but they can still cost tens of thousands of dollars. Engineers at the University of California at San Diego have developed a cheap and fast wire-crawling inspection robot called the SkySweeper. Made of off-the-shelf electronics and 3D-printed parts , the basic bot can be produced for less than $1,000.

The V-shaped bot hangs from a wire and works around a spring-elastic elbow joint. It moves along like an upside-down inchworm as its cable-hugging clamps open and close. It’s a basic prototype with a lithium-polymer battery and an Arduino controller, yet it can be augmented with cameras for inspection or induction coils to grab power from the line. That could let it stay aloft on the grid for months at a time.

If it faces a support bracket or other obstacle along the cable, SkySweeper can do a back flip to get past it. “Current line inspection robots are large, complex, and expensive,” Nick Morozovsky, a UCSD mechanical engineering grad student who designed the robot, said in a release. “Utility companies may also use manned or unmanned helicopters equipped with infrared imaging to inspect lines. This is much simpler.” Morozovsky will present the robot at the International Conference on Intelligent Robots and Systems (IROS 2013) in November in Tokyo, and also has it as an entry in the Road to Maker Faire Challenge. 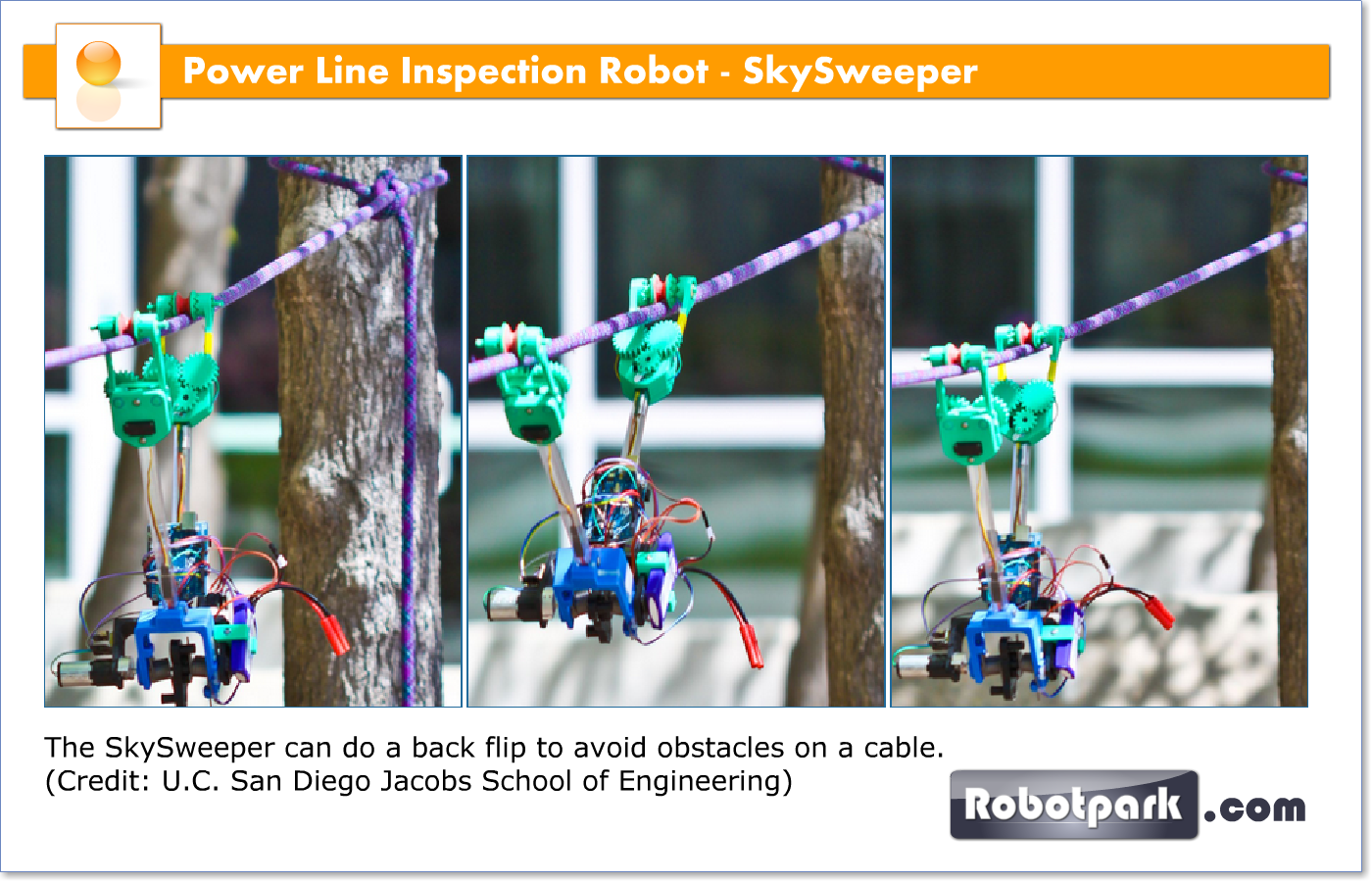 Mechanical engineers at the University of California, San Diego invented a robot designed to scoot along utility lines, searching for damage and other problems that require repairs. Made of off-the-shelf electronics and plastic parts printed on an inexpensive 3D printer, the SkySweeper prototype could be scaled up for less than $1,000, making it significantly more economical than the two models of robots currently used to inspect power lines.

“Current line inspection robots are large, complex, and expensive. Utility companies may also use manned or unmanned helicopters equipped with infrared imaging to inspect lines,” said Nick Morozovsky, a graduate student in mechanical engineering at UC San Diego, who designed the robot. “This is much simpler.” 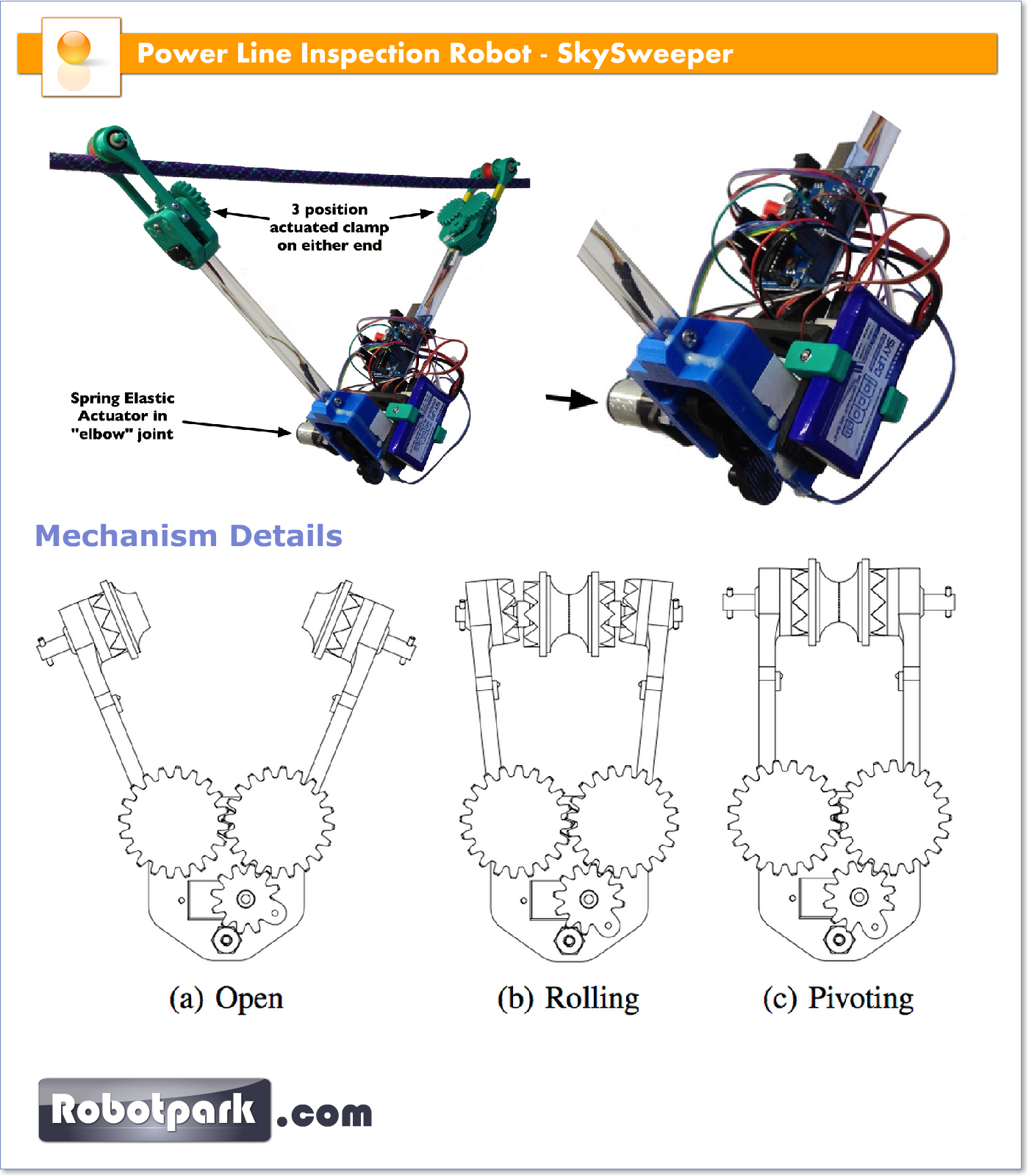 By: Nick Morozovsky, Roboticist
Description:  SkySweeper is designed to move along rope or cable like no other robot. Existing robots that inspect power lines are large, slow, and expensive. SkySweeper is small, fast, and almost all parts of the robot are 3D printed or available cheaply off-the-shelf.

Hobby servos move the clamps on either end to one of three positions: either open, partially closed such that the clamp can roll along the cable, or fully closed such that the clamp can only pivot on the cable. A motor at the “elbow” joint of the robot is connected to a spring, together the motor and spring are called a Series Elastic Actuator (SEA), which can both change the angle between the links and store potential energy in the spring when both clamps are locked on the cable.

Sensors measure the angle between the links, how much energy is stored in the spring, and if a cable is within reach of each clamp. The robot is controlled with a finite state machine controller programmed as a switch structure on an Arduino Uno. A lithium polymer battery powers the motors, sensors, and Arduino.

SkySweeper can move along cable in multiple different ways. It can “inchworm” along by opening and closing its links and controlling which clamp is rolling or only pivoting. If SkySweeper needs to avoid an obstacle on the cable, like a support holding onto the cable, it can do a backflip to get past the obstacle, it can even keep on backflipping along the cable!

Morozovsky, who works in the lab of Professor Thomas Bewley at the Jacobs School of Engineering at UC San Diego, will introduce the robot at the International Conference on Intelligent Robots and Systems, also known as IROS 2013, from Nov. 3 to 8 in Tokyo. He will also present a paper, titled “A Low Degrees of Freedom, Dynamic High Wire Robot,” at the conference.