What is a Screw Mechanism ?

The common principle of all screws is that a rotating helix can cause linear motion.

A screw is a mechanism that converts rotational motion to linear motion, and a torque (rotational force) to a linear force. It is one of the six classical simple machines. The most common form consists of a cylindrical shaft with helical grooves or ridges called threads around the outside. The screw passes through a hole in another object or medium, with threads on the inside of the hole that mesh with the screw’s threads. When the shaft of the screw is rotated relative to the stationary threads, the screw moves along its axis relative to the medium surrounding it; for example rotating a wood screw forces it into wood.

Other mechanisms that use the same principle, also called screws, don’t necessarily have a shaft or threads. For example, a corkscrew is a helix-shaped rod with a sharp point, and an Archimedes’ screw is a water pump that uses a rotating helical chamber to move water uphill. The common principle of all screws is that a rotating helix can cause linear motion.

A screw can amplify force; a small rotational force (torque) on the shaft can exert a large axial force on a load. The smaller the pitch, the distance between the screw’s threads, the greater the mechanical advantage, the ratio of output to input force. Screws are widely used in threaded fasteners to hold objects together, and in devices such as screw tops for containers, vises, screw jacks and screw presses. 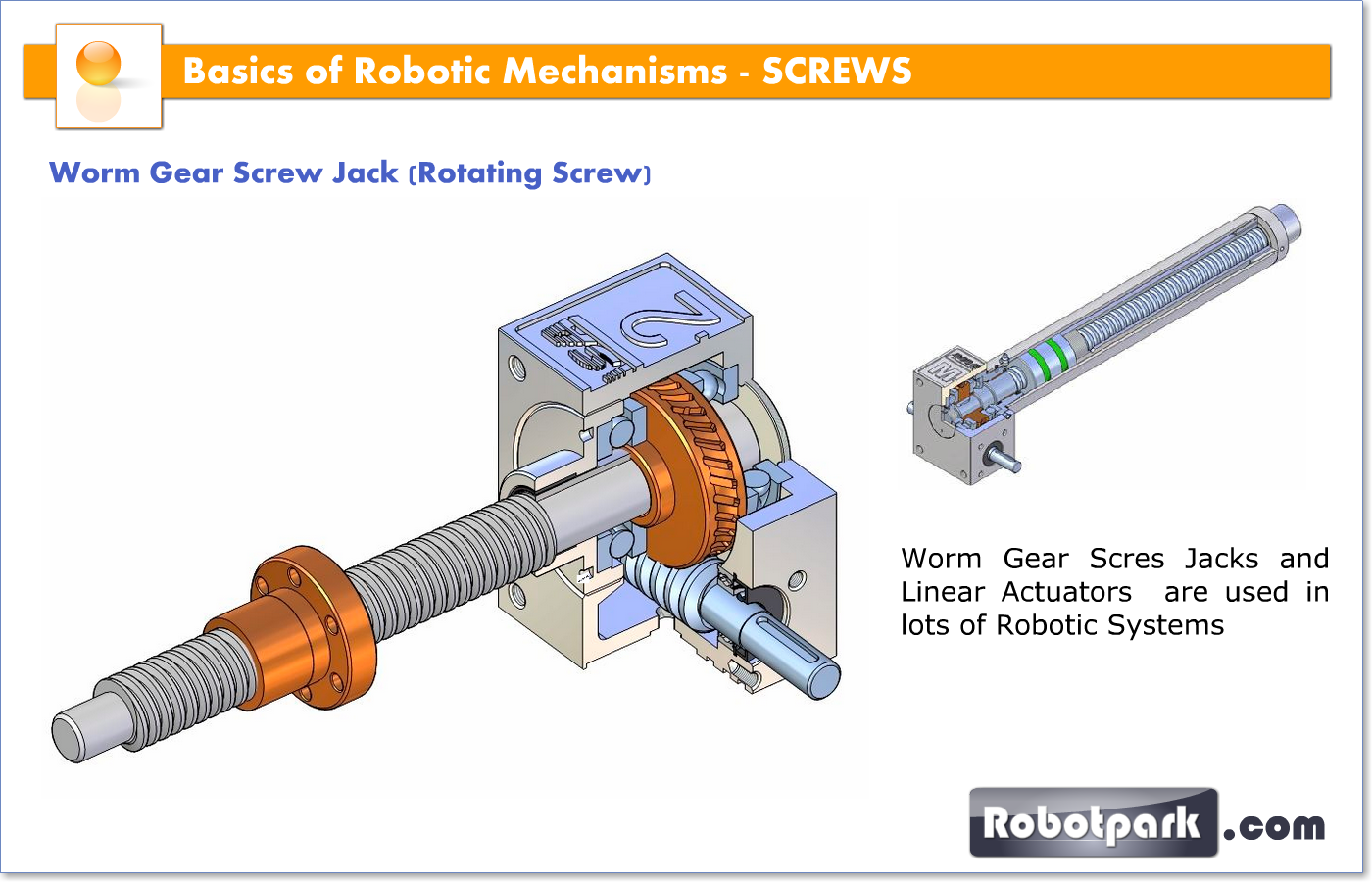 Mechanisms are often required to move a large load with a small effort. For example, a car jack allows an ordinary human to lift a car which may weigh as much as 6000 lb, while the person only exerts a force equivalent to 20 or 30 lb.

The screw jack, shown in Fig. is a practical application of the inclined plane because a screw is considered to be an inclined plane wrapped around cylinder. A force F must be exerted at the end of a length of horizontal bar l to turn the screw to raise the load (weight W) of 1000 lb. The 5-ft bar must be moved through a complete turn or a circle of length s  2 l to advance the load a distance h of 1.0 in. or 0.08 ft equal to the pitch p of the screw. The pitch of the screw is the distance advanced in a complete turn.

An advantage of jackscrews over some other types of jack is that they are self-locking, which means when the rotational force on the screw is removed, it will remain motionless where it was left and will not rotate backwards, regardless of how much load it is supporting. This makes them inherently safer than hydraulic jacks, for example, which will move backwards under load if the force on the hydraulic actuator is accidentally released.

The mechanical advantage of a screw jack, the ratio of the force the jack exerts on the load to the input force on the lever, ignoring friction, is

is the force the jack exerts on the load

is the length of the jack handle, from the screw axis to where the force is applied

is the lead of the screw.

However, most screw jacks have large amounts of friction which increase the input force necessary, so the actual mechanical advantage is often only 30% to 50% of this figure.

The rotational force applied to the screw is actually a torque

. Because of this, the input force required to turn a screw depends on how far from the shaft it is applied; the farther from the shaft, the less force is needed to turn it. The force on a screw is not usually applied at the rim as assumed above. It is often applied by some form of lever; for example a bolt is turned by a wrench. The mechanical advantage in this case can be calculated by using the length of the lever arm for r in the above equation. This extraneous factor r can be removed from the above equation by writing it in terms of torque:

Because of the large area of sliding contact between the moving and stationary threads, screws typically have large frictional energy losses. Even well-lubricated jack screws have efficiencies of only 15% – 20%, the rest of the work applied in turning them is lost to friction. When friction is included, the mechanical advantage is no longer equal to the distance ratio but also depends on the screw’s efficiency. From conservation of energy, the work Win done on the screw by the input force turning it is equal to the sum of the work done moving the load Wout, and the work dissipated as heat by friction Wfric in the screw

Work is defined as the force multiplied by the distance moved, so

So the mechanical advantage of an actual screw is reduced from what it would be in an ideal, frictionless screw by the efficiency

. Because of their low efficiency, in powered machinery screws are not often used as linkages to transfer large amounts of power (except in lead screws) but are more often used in positioners that operate intermittently.