Researchers at Columbia Univ. Medical Center, working with their collaborators at the Hospital for Special Surgery, have created a fleet of molecular “robots” that can home in on specific human cells and mark them for drug therapy or destruction. 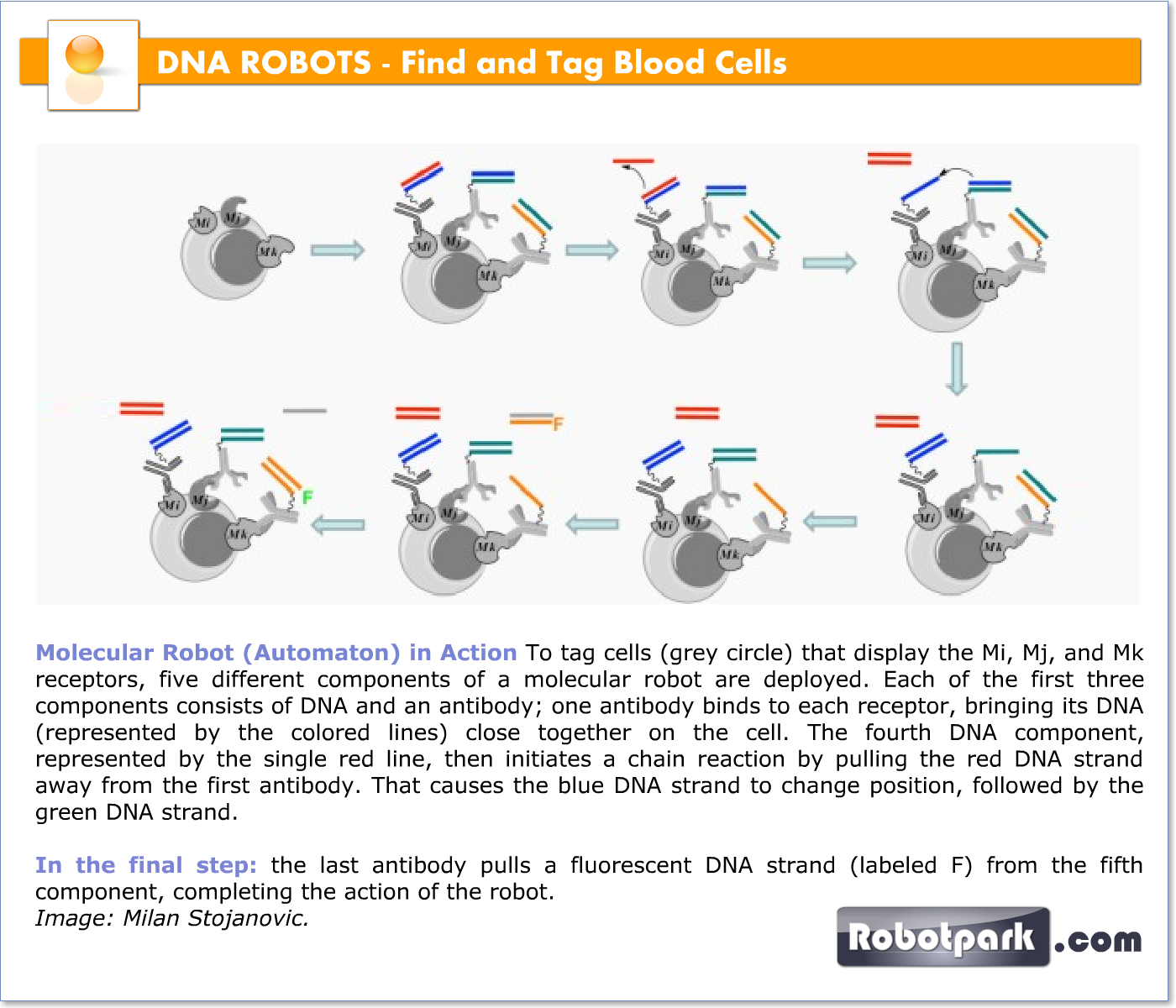 The nanorobots—a collection of DNA molecules, some attached to antibodies—were designed to seek a specific set of human blood cells and attach a fluorescent tag to the cell surfaces. Details of the system were published online in Nature Nanotechnology.

“This opens up the possibility of using such molecules to target, treat or kill specific cells without affecting similar healthy cells,”

“In our experiment, we tagged the cells with a fluorescent marker; but we could replace that with a drug or with a toxin to kill the cell.”

Though other DNA nanorobots have been designed to deliver drugs to cells, the advantage of Stojanovic’s fleet is its ability to distinguish cell populations that do not share a single distinctive feature.

Cells, including cancer cells, rarely possess a single, exclusive feature that sets them apart from all other cells. This makes it difficult to design drugs without side effects. Drugs can be designed to target cancer cells with a specific receptor, but healthy cells with the same receptor will also be targeted.

The only way to target cells more precisely is to identify cells based on a collection of features. “If we look for the presence of five, six or more proteins on the cell surface, we can be more selective,” Stojanovic said. Large cell-sorting machines have the ability to identify cells based on multiple proteins, but until now, molecular therapeutics have not had that capability.

Instead of building a single complex molecule to identify multiple features of a cell surface, Stojanovic and his colleagues at Columbia used a different, and potentially easier, approach based on multiple simple molecules, which together form a robot (or automaton, as the authors prefer calling it).

To identify a cell possessing three specific surface proteins, Stojanovic first constructed three different components for molecular robots. Each component consisted of a piece of double-stranded DNA attached to an antibody specific to one of the surface proteins. When these components are added to a collection of cells, the antibody portions of the robot bind to their respective proteins (in the figure, CD45, CD3 and CD8) and work in concert.

On cells where all three components are attached, the robot is functional and a fourth component (labeled 0 below) initiates a chain reaction among the DNA strands. Each component swaps a strand of DNA with another, until the end of the swap, when the last antibody obtains a strand of DNA that is fluorescently labeled.

At the end of the chain reaction—which takes less than 15 min in a sample of human blood—only cells with the three surface proteins are labeled with the fluorescent marker.

“We have demonstrated our concept with blood cells because their surface proteins are well known, but in principle our molecules could be deployed anywhere in the body,”

Stojanovic said. In addition, the system can be expanded to identify four, five, or even more surface proteins. Now the researchers must show that their molecular robots work in a living animal; the next step will be experiments in mice.