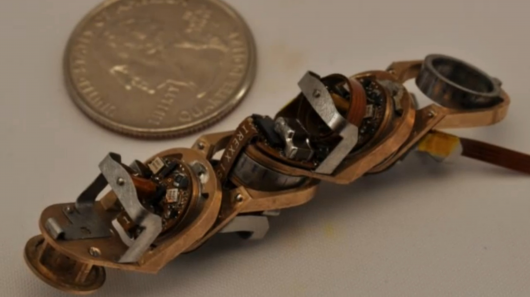 An MIT team is developing a robot that has the potential to become possibly the most versatile machine ever. Referred to by the team as the “robotic equivalent of a Swiss Army knife,” the milli-motein robot is made up of a chain of tiny modules each containing a new type of motor that can be used to form the chain into various shapes. This shape-changing capability could lead to the creation of robots that dynamically change their form to suit the task at hand.

To call the milli-motein a “Swiss Army knife” is a bit of a misnomer. The iconic bit of cutlery gets its versatility by carrying all sorts of tools folded away inside itself. However, the protein-inspired milli-motein robot does its job by turning itself into the needed tool. In this respect, its less like a pocket knife and more like the shape-shifting Shoggoths from H.P. Lovecraft’s stories. Though that sounds disturbing, it gives the milli-motein the potential for one day becoming a nearly universal machine.

The MIT team of Neil Gershenfeld, head of MIT’s Center for Bits and Atoms, visiting scientist Ara Knaian and postdoctoral associate Kenneth Cheung call this idea “programmable matter.” Ideally, what the team would like to achieve is a device that can change to become whatever is required at the time. If you need a hammer, it’s a hammer. If you need a spanner, it’s a spanner.

This device would be made up of tiny chains of mechanical modules strung together. That may sound a lot like other wormlike robots, but its purpose is more ambitious than just wiggling through cracks. With a paper published last year by another MIT team mathematically proving it is theoretically possible to reproduce any 3D shape by folding a sufficiently long string, such a chain modeled on protein molecules could be folded into any 3D shape.

As a first step in developing programmable matter, the MIT team produced the milli-motein robot. Its name stands for MILLImeter MOtor proTEIN and is currently the world’s smallest chain robot. Created under a DARPA grant at MIT’s Center for Bits and Atoms, each of its modules is smaller than a cubic centimeter and is built around an entirely new kind of motor.

The milli-motein’s modules are too small to use conventional gears and motors, so in order to keep the design simple and the costs down, the team came up with a motor that is strong, yet maintains its position when turned off.

How Does it Work ? 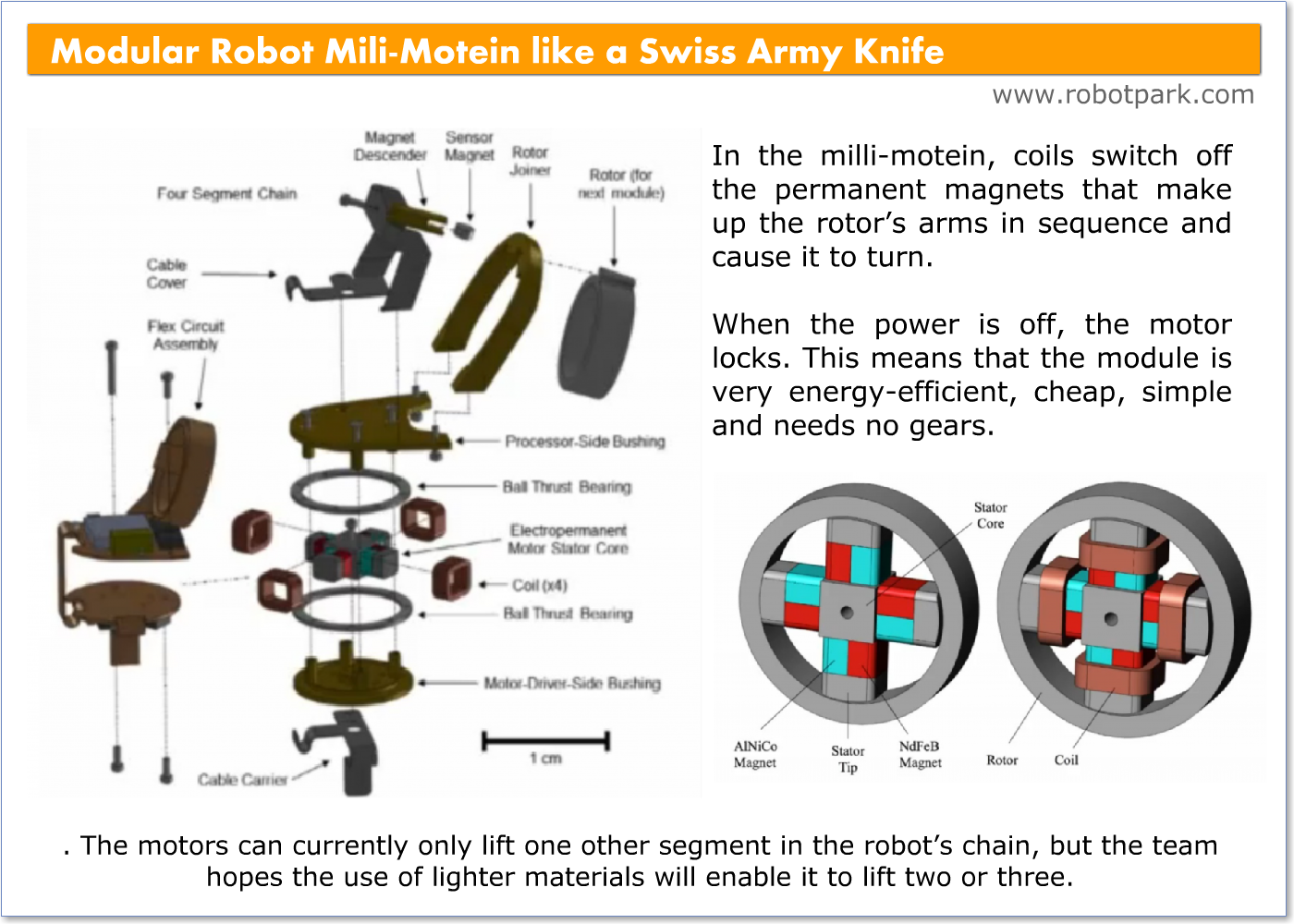 In the milli-motein, coils switch off the permanent magnets that make up the rotor’s arms in sequence and cause it to turn. When the power is off, the motor locks. This means that the module is very energy-efficient, cheap, simple and needs no gears. It also makes the motor relatively powerful for its size. The motors can currently only lift one other segment in the robot’s chain, but the team hopes the use of lighter materials will enable it to lift two or three.

When the milli-motein modules are linked in a chain, each module gets an instruction to turn left, right or straight. It works like DNA code in that, like a DNA pair, it carries out an independent function without any reference to the task as a whole. However, the team learned that using the modules in chains rather than as discrete units allowed for much more efficient control since commands can be passed down the line so that the individual “dumb” modules operate in harmony.

The final size of later versions of the milli-motein robot will depend on the size of the task and chains can range from the size of proteins to that of a human being. Even if the robot concept goes nowhere, the new motor has already sparked interest in a number of industries.

The MIT video below explains the mechanics of the milli-motein robot.

The device doesn’t look like much: a caterpillar-sized assembly of metal rings and strips resembling something you might find buried in a home-workshop drawer. But the technology behind it, and the long-range possibilities it represents, are quite remarkable.

The little device is called a milli-motein — a name melding its millimeter-sized components and a motorized design inspired by proteins, which naturally fold themselves into incredibly complex shapes. This minuscule robot may be a harbinger of future devices that could fold themselves up into almost any shape imaginable.

The device was conceived by Neil Gershenfeld, head of MIT’s Center for Bits and Atoms, visiting scientist Ara Knaian and graduate student Kenneth Cheung, and is described in a paper presented recently at the 2012 Intelligent Robots and Systems conference. Its key feature, Gershenfeld says: “It’s effectively a one-dimensional robot that can be made in a continuous strip, without conventionally moving parts, and then folded into arbitrary shapes.”