What is a Simple Servo Motor ?  The broad definition of a servo motor is an automatic device with some sensing mechanism to correct its performance. This is the definition of simple servo motors.

Simple Servos are used for positioning applications. They were originally designed to control Remote Control airplanes and their low cost and high torque makes them very useful as an actuator in prototyping applications. An RC Servo can be instructed to move to a desired position by the controller. Internally, it monitors the current position, and drives the motor as fast as it can until it reaches the desired position. This is a very cheap and simple way to control a motor. It has some limitations – there is no way for the controller to know the current position and speed of the motor. Applications that want smooth movement suffer from the aggressive acceleration.

Servo motors have been around for a long time and are utilized in many applications. They are small in size but pack a big punch and are very energy-efficient. Because of these features, they can be used to operate remote-controlled or radio-controlled toy cars, robots and airplanes. Servo motors are also used in industrial applications, robotics, in-line manufacturing,pharmaceutics and food services.

A Servo Motor is a rotary actuator that allows for precise control of angular position, velocity and acceleration. It consists of a suitable motor coupled to a sensor for position feedback. It also requires a relatively sophisticated controller, often a dedicated module designed specifically for use with servomotors.

Servo motors are not a different class of motor, on the basis of fundamental operating principle, but uses servo mechanism to achieve closed loop control with a generic open loop motor. Servo motors are used in applications such as robotics, CNC machinery or automated manufacturing. 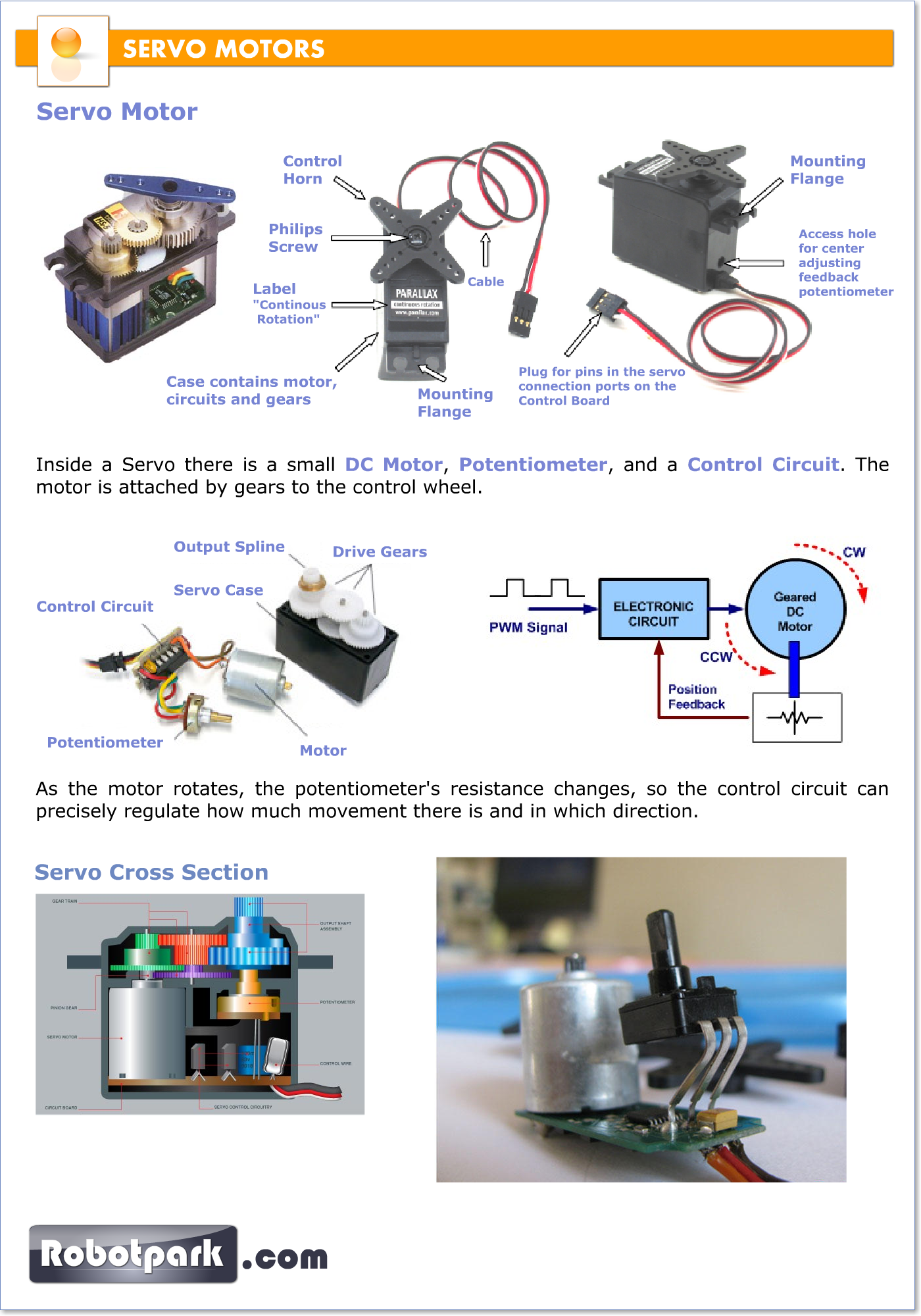 As the name suggests, a servomotor is a servo mechanism. More specifically, it is a closed-loop servo mechanism that uses position feedback to control its motion and final position. The input to its control is some signal, either analogue or digital, representing the position commanded for the output shaft.

The motor is paired with some type of encoder to provide position and speed feedback. In the simplest case, only the position is measured. The measured position of the output is compared to the command position, the external input to the controller. If the output position differs from that required, an error signal is generated which then causes the motor to rotate in either direction, as needed to bring the output shaft to the appropriate position. As the positions approach, the error signal reduces to zero and the motor stops.

The very simplest servo motors use position-only sensing via a potentiometer and bang-bang control of their motor; the motor always rotates at full speed (or is stopped). This type of servomotor is not widely used in industrial motion control, but they form the basis of the simple and cheap servos used for radio-controlled models.

Servo motors are generally used as a high performance alternative to the stepper motor. Stepper motors have some inherent ability to control position, as they have built-in output steps. This often allows them to be used as an open-loop position control, without any feedback encoder, as their drive signal specifies the number of steps of movement to rotate. This lack of feedback though limits their performance, as the stepper motor can only drive a load that is well within its capacity, otherwise missed steps under load may lead to positioning errors.

The encoder and controller of a servo motor are an additional cost, but they optimise the performance of the overall system (for all of speed, power and accuracy) relative to the capacity of the basic motor. With larger systems, where a powerful motor represents an increasing proportion of the system cost, servo motors have the advantage.

A DC motor has a two wire connection. All drive power is supplied over these two wires—think of a light bulb. When you turn on a DC motor, it just starts spinning round and round. Most DC motors are pretty fast, about 5000 RPM (revolutions per minute).

With the DC motor, its speed (or more accurately, its power level) is controlled using a technique named pulse width modulation, or simply PWM. This is idea of controlling the motor’s power level by strobing the power on and off. The key concept here is duty cycle—the percentage of “on time” versus“off time.” If the power is on only 1/2 of the time, the motor runs with 1/2 the power of its full-on operation.

A servo motor is an entirely different story. The servo motor is actually an assembly of four things: a normal DC motor, a gear reduction unit, a position-sensing device (usually a potentiometer—a volume control knob), and a control circuit.

The function of the servo is to receive a control signal that represents a desired output position of the servo shaft, and apply power to its DC motor until its shaft turns to that position. It uses the position-sensing device to determine the rotational position of the shaft, so it knows which way the motor must turn to move the shaft to the commanded position. The shaft typically does not rotate freely round and round like a DC motor, but rather can only turn 200 degrees or so back and forth.

The servo has a 3 wire connection: power, ground, and control. The power source must be constantly applied; the servo has its own drive electronics that draw current from the power lead to drive the motor.

To recap, there are two important differences between the control pulse of the servo motor versus the DC motor. First, on the servo motor, duty cycle (on-time vs. off-time) has no meaning whatsoever—all that matters is the absolute duration of the positive-going pulse, which corresponds to a commanded output position of the servo shaft. Second, the servo has its own power electronics, so very little power flows over the control signal. All power is draw from its power lead, which must be simply hooked up to a high-current source of 5 volts.

1- Simple Servo : The average servo is the most common type of RC (radio control) servo on the market. They work exactly as expected and typically have a range of motion somewhere between 180º and 360º.

2- Continuous Rotation Servo: These are a subset of servos that do not track position. They have been modified to always report a current position of 0 so when they rotate they keep turning until the target position is set to 0.

3- Linear Actuator Servo: Linear servos behave like pistons, extending and contracting. This is achieved by using a screw thread at the end of the gearbox, changing the rotational motion to linear motion. Other than that, it behaves the same as any other servo motor.

4- Digital Servo: Digital servos behave in the same way as traditional servos except their internals are different. Normally, a servo motor consists of a DC motor, a potentiometer, and a small analog circuit which acts as a controller to keep the motor in position. In the case of digital servos, the analog circuit is replaced with a microprocessor which performs the same function. This allows digital servos to have faster response times, more accurate control of position and velocity, and more torque per size. However, digital servos use substantially more power than their analog counterparts. This means that for the same power supply you will be able to operate fewer digital servos than analog. Depending on the size of the digital servo, you may need an external power supply when using them.

Some digital servos are designed such that the control system retains its previous value when position commands stop coming in from the controller. This has the unusual effect of making the motor hold its position forcibly even when you disengage the motor programmatically. This can often be undesirable since it means the motor is still drawing power and that it will not turn. In order to avoid this behaviour with this type of servo you will need to use a relay or switch of some kind on the red wire going to the motor (the power wire) so that you can completely disengage the motor when you need to.

There are two types of servo Motors by Current - AC and DC. AC servo can handle higher current surges and tend to be used in industrial machinery. DC servos are not designed for high current surges and are usually better suited for smaller applications. Generally speaking, DC motors are less expensive than their AC counterparts. These are also servo motors that have been built specifically for continuous rotation, making it an easy way to get your robot moving. They feature two ball bearings on the output shaft for reduced friction and easy access to the rest-point adjustment potentiometer.

This video shows position controlled linear servo motor. The motor is basically a magnet track on aluminum base and a coil unit below car. The feedback comes from linear encoder in front side of this assembly. This demonstrates automatic homing controller of Granite Devices VSD-XE drive. The homing starts automatically when power is switched on and after finding the “hard stop” the car is driven to center position. Repeatability of hard stop homing can be as high as +/- 10µm. After homing is done, some random position moves are commanded to drive. The motor moves at velocity of 2000 mm/s and accelerates at 5G’s.

HOW to SELECT A SERVO MOTOR

Servos have 3 main attributes that must be taken into account when choosing what servo is correct for your application: