Telepresence is a refined, advanced form of teleoperation. The robot operator gets a sense of being at the robot’s physical location, even if the remotely controlled robot (or telechir) and the operator are many kilometers apart. Using master–slave manipulators, the robot can duplicate the movements of the operator. Control of these manipulators is accomplished by means of signals sent and received over wires, cables, optical fibers, or radio. 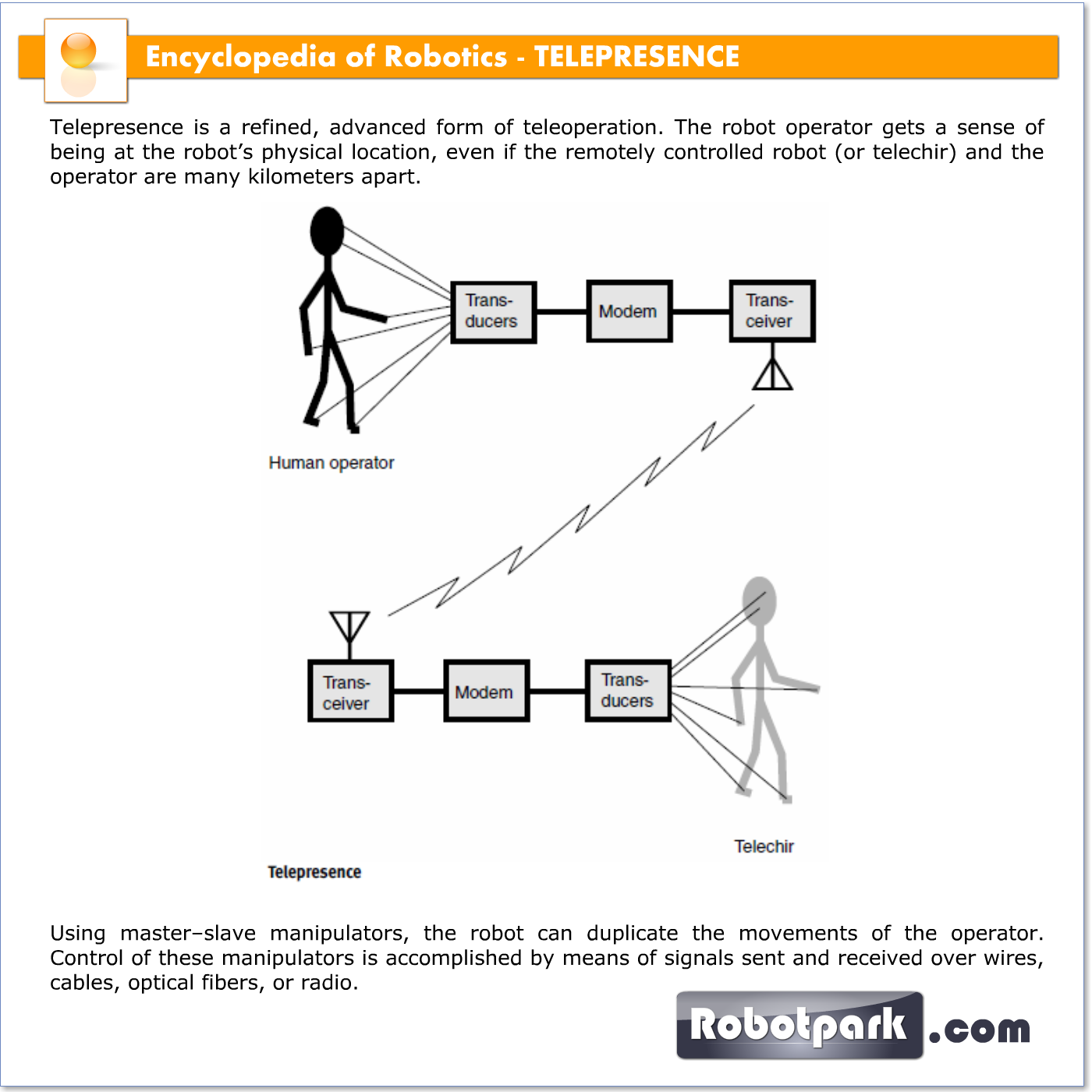 The drawing is a simple block diagram of a telepresence system. Some applications are

• Working in extreme heat or cold
• Working under high pressure, such as on the sea floor
• Working in a vacuum, such as in space
• Working where there is dangerous radiation
• Disarming bombs
• Handling toxic substances
• Law-enforcement operations
• Military operations

In a telepresence system, the robot is autonomous, and in some cases takes the physical form of a human body. The more humanoid the robot, the more realistic is the telepresence. The control station consists of a suit that the operator wears, or a chair in which the operator sits with various manipulators and displays. Sensors and transducers can impart feelings of pressure, vision, and sound.

In the most advanced telepresence systems, the operator wears a helmet with a viewing screen that shows whatever the robot camera sees.When the operator’s head turns, the robot head, with its vision system, follows. Thus, the operator sees a scene that changes with turns of the head, replicating the effect of being on-site. Binocular robot vision can provide a sense of depth. Binaural robot hearing allows the perception of sounds. The telechir can be propelled by a track drive, a wheel drive, or robot legs. If the propulsion uses legs, the operator can propel the robot by walking around a room. Otherwise the operator can sit in a chair and “drive” the robot like a cart.

A typical android telechir has two arms, each with grippers resembling human hands.When the operator wants to pick something up, he or she goes through the motions. Back pressure sensors and position sensors impart a sensation of heft. The operator might throw a switch, and something that weighs 10 kg will feel as if it only weighs 1 kg.

The technology for advanced, realistic telepresence, comparable to virtualreality experience, exists, but there are some difficult problems and challenges.

The most serious limitation is the fact that telemetry cannot, and never will, travel faster than the speed of light in free space. This seems fast at first thought (299,792 km/s, or 186,282 mi/s), but it is slow on an interplanetary scale. The Moon is more than a light-second away from Earth; the Sun is 8 light-minutes away. The nearest stars are at distances of several light-years. The delay between the sending of a command and the arrival of the return signal must be less than 0.1 s if telepresence is to be realistic. This means that the telechir cannot be more than about 15,000 km, or 9300 mi, away from the control operator.

Another problem is the resolution of the robotic vision system.A human being with good eyesight can see things with several times the detail of the best fast-scan television sets. To send that much detail, at realistic speed, requires a huge signal bandwidth. There are engineering problems (and cost problems) that go along with this.

Still another limitation is best put as a question: How will a robot be able to “feel” something and transmit these impulses to the human brain? For example, an apple feels smooth, a peach feels fuzzy, and an orange feels shiny yet bumpy.How can this sense of texture be realistically transmitted to the human brain? Will people allow electrodes to be implanted in their brains so they can perceive the universe as if they are robots?