In nature, small animals or insects use multiple locomotion methods to efficiently travel in difficult environments. Inspired by the multi-modal locomotion ability found in animals, we design a miniature robot that can jump, run, and perform aerial maneuvering. Specifically, this robot can use wheeled locomotion to run on flat ground. Encountering a large obstacle, it can jump up to overcome the obstacle.

After leaping into the air, the robot can control its body angle using its tail for aerial maneuvering. To the best of our knowledge, this is the first miniature (maximum size 7.5 centimeters) and lightweight (26.5 grams) robot that having all the three capabilities. Furthermore, this robot is equipped with on-board energy, sensing, control, and wireless communication capabilities, which enables the tetherless or autonomous operation. It has many applications ranging from search and rescue, military surveillance, and environmental monitoring. 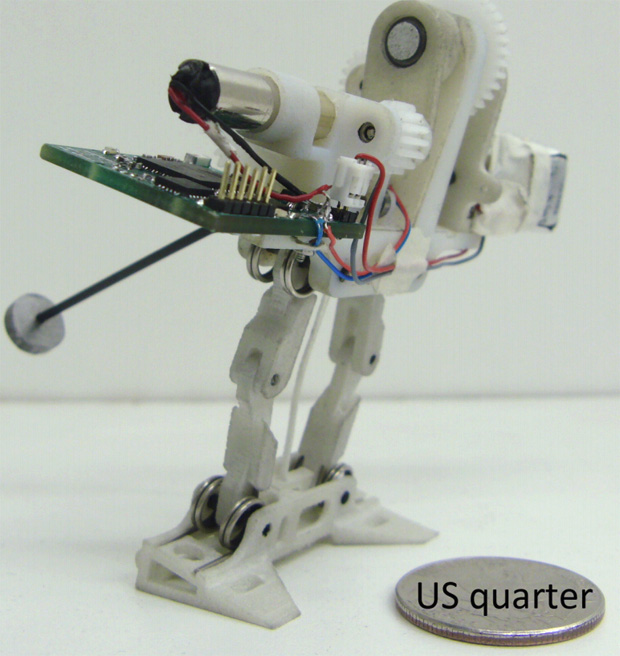 We first met Jianguo Zhao’s jumping robot at ICRA 2011. We were impressed because of how tiny it was, but also because it could change direction, self-right, and jump, all using just one single motor and a clever arrangement of gears. A new upgrade (inspired by research from UC Berkely) adds a tail to the mix, giving this little robot the ability to orient itself in midair. Oh, and it can also run, because why not.

Adding a tail also involved adding an extra motor to the robot, but there was no way that the designers could tolerate such inefficiency. So, the tail motor and gear can team up with a gear on the jumping motor to give the robot the ability to move horizontally along the ground. My guess is that the next iteration of this robot that we see will (somehow) have that motor enabling three abilities instead of just two.

The total weight of the robot is still just 26 grams, and it’s only 7.5 centimeters tall. It can jump over 80 centimeters up (with a 75 degree takeoff angle), and while “running,” it can reach speeds of nearly 4 cm/s. In addition, the robot is equipped with on-board sensors, and of course it can be controlled wirelessly or made fully autonomous, and the designers speculate that it might be appropriate for applications like search and rescue, military surveillance, and environmental monitoring.

Officially, this research will be presented at IROS 2013 in Toyko this November, but a pre-print edition of the full paper is already available below…