An integrated circuit (IC) is an electronic device containing many diodes, transistors, resistors, and/or capacitors fabricated onto a wafer, or chip, of semiconductor material. The chip is enclosed in a small package with pins for connection to external components. Integrated circuits are used extensively in robots and their controllers.

Integrated-circuit devices and systems are far more compact than equivalent circuits made from discrete components.More complex circuits can be built, and kept down to a reasonable size, using ICs as compared with discrete components. Thus, for example, there are notebook computers with capabilities more advanced than early computers, which took up entire rooms.

In an IC, the interconnections among components are physically tiny, making high switching speeds possible. Electric currents travel fast, but not instantaneously. The faster the charge carriers move from one component to another, the more operations can be performed per unit time, and the less time is required for complex operations. 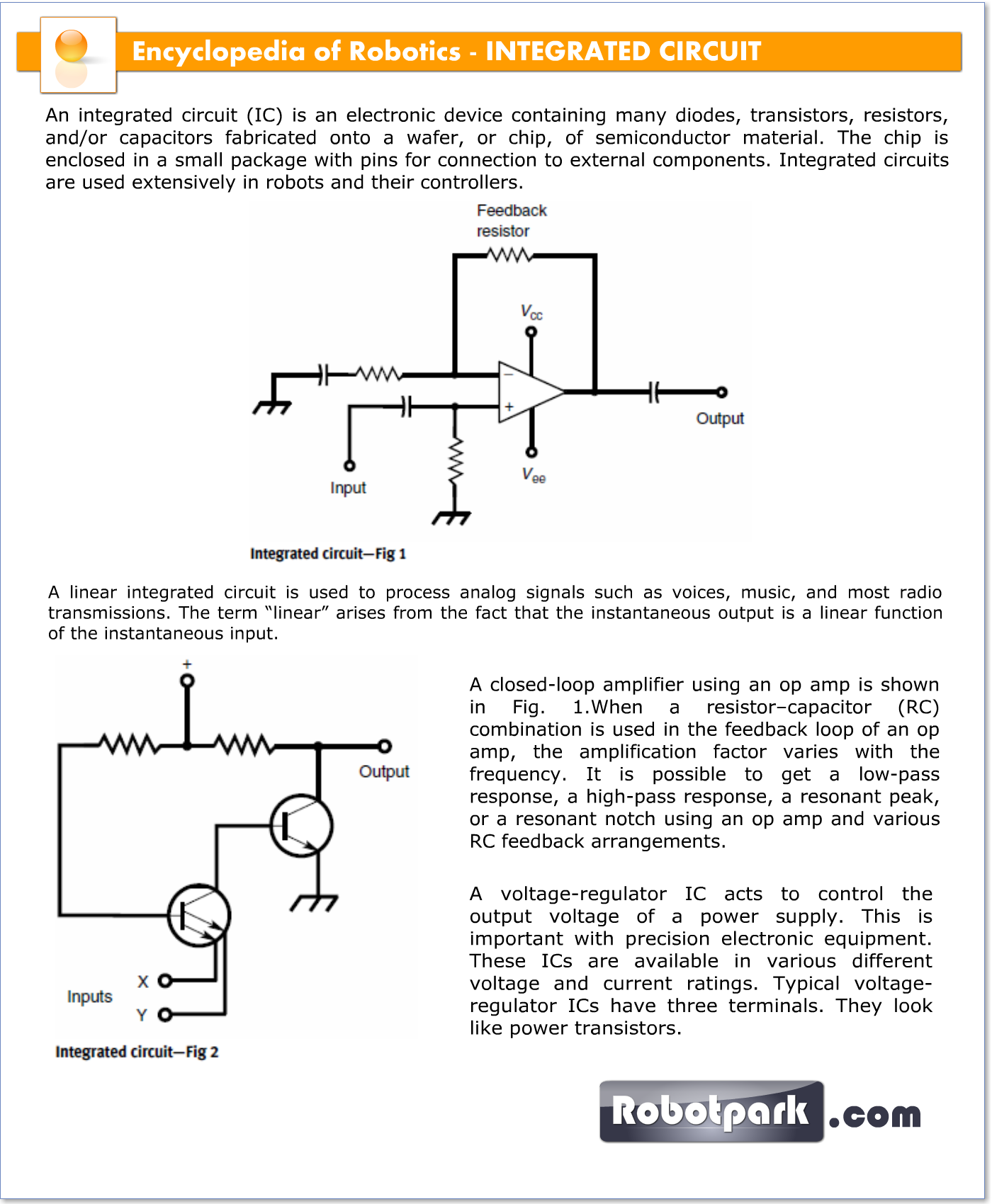 Integrated circuits consume less power than equivalent discretecomponent circuits. This is important if batteries are used. Because ICs draw so little current, they produce less heat than their discrete-component equivalents. This results in better efficiency, and minimizes problems that plague equipment that gets hot with use, such as frequency drift and generation of internal noise.

Systems using ICs fail less often, per component-hour of use, than systems that make use of discrete components. This is mainly because all interconnections are sealed within an IC case, preventing corrosion or the intrusion of dust. The reduced failure rate translates into less downtime.

Integrated-circuit technology lowers service costs, because repair procedures are simple when failures occur.Many systems use sockets for ICs, and replacement is simply a matter of finding the faulty IC, unplugging it, and plugging in a new one. Special desoldering equipment is used for servicing circuit boards that have ICs soldered directly to the foil.

Modern IC appliances employ modular construction. Individual ICs perform defined functions within a circuit board; the circuit board or card, in turn, fits into a socket and has a specific purpose. Computers, programmed with customized software, are used by technicians to locate the faulty card in a system. The card can be pulled and replaced, getting the system back to the user in the shortest possible time.

A linear integrated circuit is used to process analog signals such as voices, music, and most radio transmissions. The term “linear” arises from the fact that the instantaneous output is a linear function of the instantaneous input.

An operational amplifier (also called an op amp) consists of several transistors, resistors, diodes, and capacitors, interconnected to produce high gain over a wide range of frequencies.An op amp has two inputs and one output.When a signal is applied to the noninverting input, the output is in phase with it; when a signal is applied to the inverting input, the output is 180° out of phase with it.An op amp has two power supply connections, one for the emitters of the transistors (Vee) and one for the collectors (Vcc). The symbol for an op amp is a triangle. The inputs, output, and power supply connections are drawn as lines emerging from the triangle. The gain characteristics of an op amp are determined by external resistors. Normally, a resistor is connected between the output and the inverting input. This is the closed-loop configuration. The feedback is negative, causing the gain to be less than it would be if there were no feedback (open-loop configuration).

A voltage-regulator IC acts to control the output voltage of a power supply. This is important with precision electronic equipment. These ICs are available in various different voltage and current ratings. Typical voltage-regulator ICs have three terminals. They look like power transistors.

A timer IC is a form of oscillator. It produces a delayed output, with the delay being variable to suit the needs of a particular device. The delay is generated by counting the number of oscillator pulses. The length of the delay is adjusted by means of external resistors and capacitors.

A multiplexer IC allows several different signals to be combined in a single channel via time-division multiplexing, in a manner similar to that used with pulse modulation. An analog multiplexer can also be used in reverse; then it works as a demultiplexer.

In transistor-transistor logic (TTL), arrays of bipolar transistors, some with multiple emitters, operate on DC pulses. A TTL gate is illustrated in Fig. 2.The transistors are either cut off or saturated; there is no “in between.” Because of this,TTL circuitry is comparatively immune to extraneous noise.

Another bipolar-transistor logic form is known as emitter-coupled logic (ECL). In ECL, the transistors are not operated at saturation, as they are with TTL. This increases the speed of operation of ECL compared with TTL. However, noise pulses have a greater effect in ECL, because unsaturated transistors amplify as well as switch signals. The schematic of Fig. 3 shows a simple ECL gate.

Complementary-metal-oxide-semiconductor (CMOS) logic employs both N-type and P-type silicon on a single chip. This is analogous to using Nchannel and P-channel FETs in a circuit. The main advantages of CMOS are extremely low current drain, high operating speed, and immunity to noise.