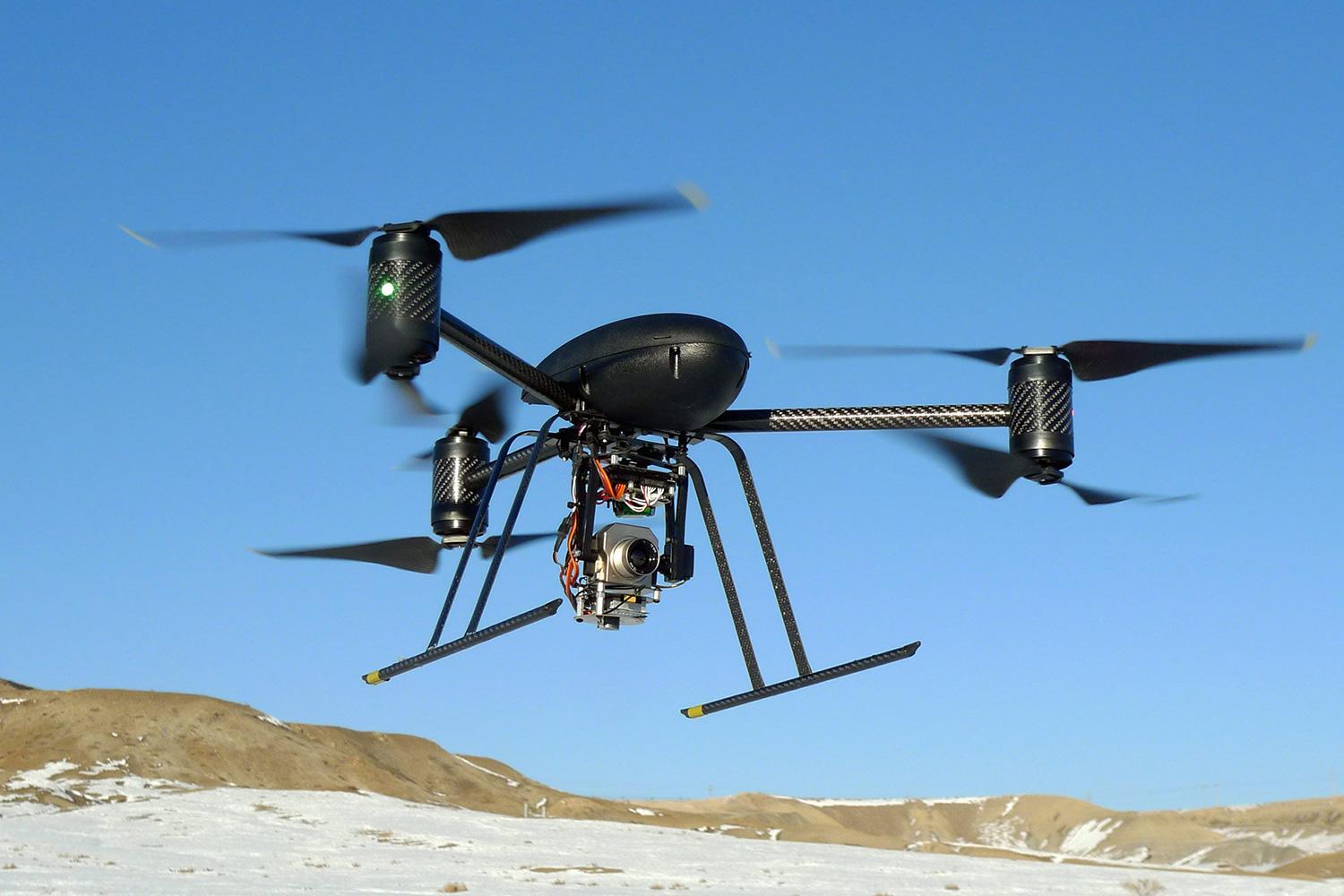 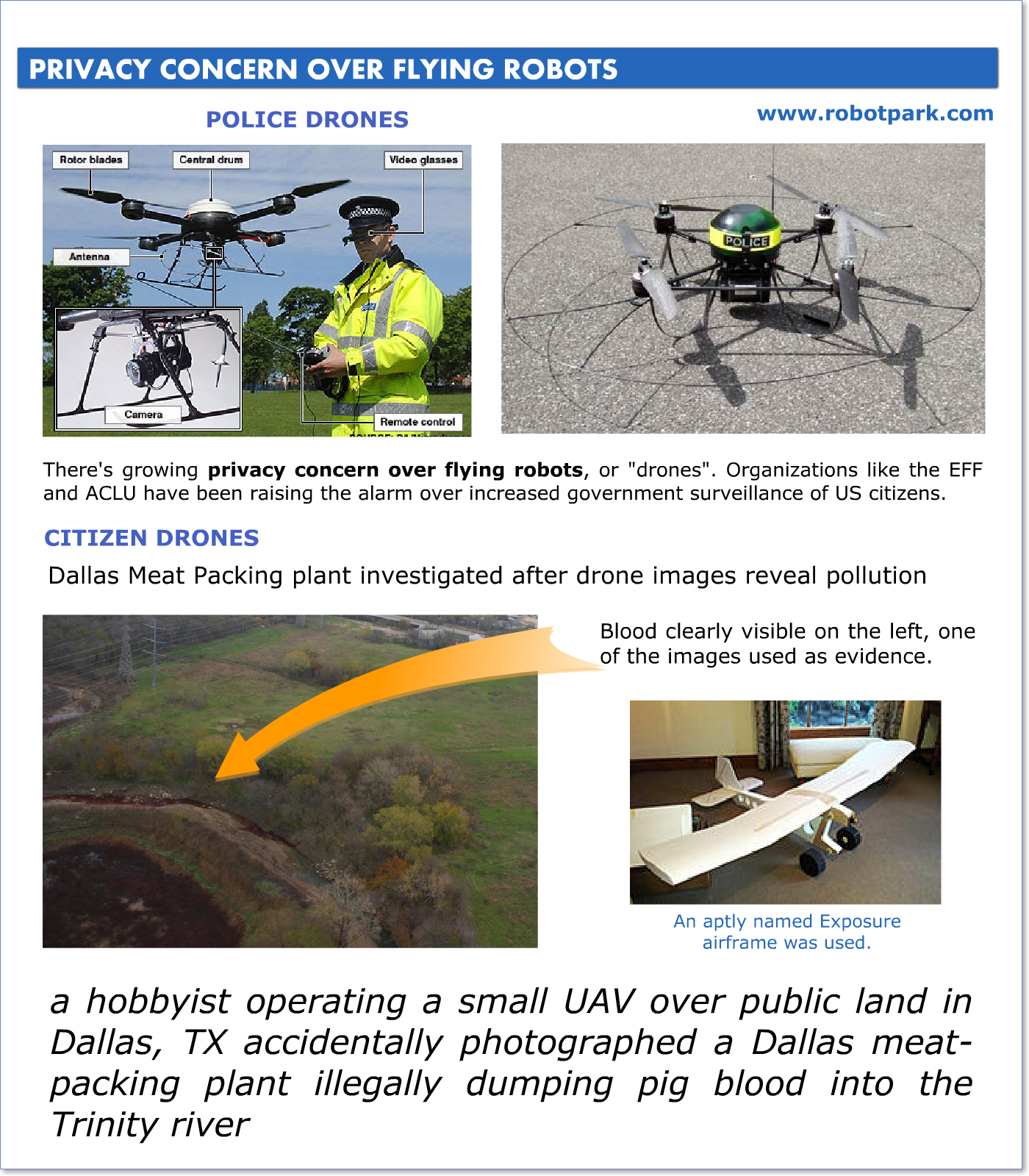 There’s growing privacy concern over flying robots , or “drones”. Organizations like the EFF and ACLU have been raising the alarm over increased government surveillance of US citizens. Legislators haven’t been quick to respond to concerns of government spying on citizens. But Texas legislators are apparently quite concerned that private citizens operating hobby drones might spot environmental violations by businesses .

You may recall the story from 2012 in which a hobbyist operating a small UAV over public land in Dallas(1) , TX accidentally photographed a Dallas meat-packing plant illegally dumping pig blood into the Trinity river, resulting in an EPA indictment. Representative Lance Gooden has introduced HB912 to solve this “problem”. But the badly worded bill could also outlaw most outdoor hobby and STEM robotics activities, stop university robotics research programs, endanger commercial robotics R&D, and end many common commercial uses of robots such as commercial aerial photography. What exactly does the bill outlaw?

“A person commits an offense if the person uses or authorizes the use of an unmanned vehicle or aircraft to capture an image without the express consent of the person who owns or lawfully occupies the real property captured in the image.” (“Image” is defined as including any type of recorded telemetry from sensors that measure “sound waves, thermal, infrared, ultraviolet, visible light, or other electromagnetic waves, odor, or other conditions”.)

So any robot in the air, underwater, on the ground, even if operating on public property, that inadvertently records any type of sensor data originating on private property, is deemed illegal. The bill ignores long-standing legal precedent establishing 1st amendment protections for photography of private property and individuals from public land .

Todd Humphreys of the UTA Radionavigation Lab has warned, “the legislation is overly broad. It doesn’t allow for a distinction between intentional peeping toms and inadvertent or unwitting surveillance”. Ben Gielow of AUVSI has pointed out several illogical aspects of the bill including its odd focus on whether the photographer is inside a vehicle. For example, a Google street view car could photograph your house because the driver is in the vehicle but Google could not use a ground or air robot to take the same image because the photographer would be outside the vehicle. While it’s possible Gooden is simply technically illiterate when it comes to robotics, the more cynical view seems to be that the wording is intentional. The bill is worded to sound as if it prevents government drones from spying on citizens but then exempts most federal, state, and even local police spying under various circumstances. The bill also says: “an image captured in violation … may not be used as evidence in any criminal … proceeding” — which would have handily protected the meat-packing plant from that meddling citizen and his robot.

For more, see the Popular Science article ” Even Hobby Drones Could Be Made Illegal in Texas “. If you’re in Texas and concerned about this bill, there’s an FPVLAb discussion thread about it with information on contacting your representatives.

A good news drone story for a change. Showing once again just how useful simple platforms can be for aquiring imagery. Every environmental department really ought to have one.A Dallas sUAS enthusiast testing his camera equiped drone noticed something awry with the images he had taken. Speaking to sUAS News he said.

I was looking at images after the flight that showed a blood red creek and was thinking, could this really be what I think it is? Can you really do that, surely not?

Whatever it is, it was flat out gross. Then comes the question of who do I report this to that can find out what it is and where it is coming from.

Search after search and even some phone calls and I am not finding anything on who to call until I find the Nation Response Center. With their website saying that they are “the sole national point of contact for reporting all oil, chemical, radiological, biological and etiological discharges into the environment, anywhere in the United States and its territories” this sure seems like the correct place to start.

I tried to use their web reporting pages to report this, but there were question being asked that I just did not know, so I gave up and picked up the phone. The Coast Guard staffed 800 number was answered immediately, and I explained to the officer what I had seen and how. I asked if I had called the correct place, and was assured that I had. The officer took my report and asked me quite a few questions. I then asked what was going to happen from here, and I was told that the appropriate authorities, including the TCEQ (Texas Commision on Environment Quality) would be notified. A local investigator was dispatched within 20 minutes and onsite within another 20.

Texas Environmental Crimes Task Force has watched the plant for two months after they first received the information. Dallas County has also been working with federal and state investigators ever since the tip came in.

Health and Human Services chief Zach Thompson says that’s what has county, federal, and state investigators so concerned. “Any time there is some type of discharge into the Trinity River… especially from an environmental standpoint, this is a real concern.”

“I think they discovered a secondary pipe again is my understanding, so the question is who installed the pipe and why was it there.”

The task force is investigating if the pig blood came from a secondary pipe not connected with the waste water system.