Sonar is a medium-range and short-range method of distance measurement.The term is an acronym that stands for sound detection and ranging.The basic principle is simple: bounce acoustic waves off of objects, and measure the time it takes for the echoes to return. In practice, sonar systems can be made so sophisticated that they rival vision systems for getting pictures of the environment. 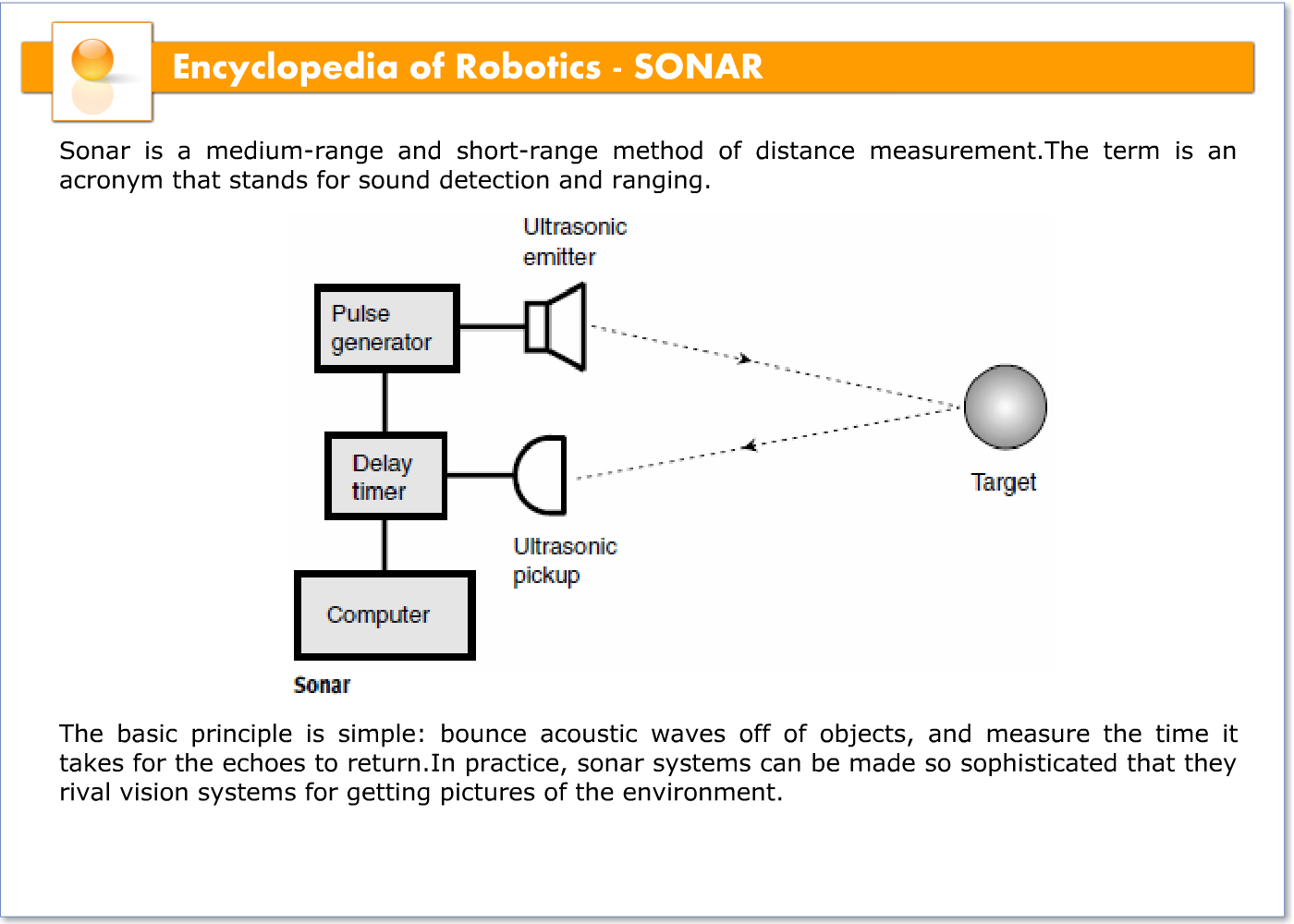 Sonar can make use of audible sound waves, but there are advantages to using ultrasound instead. Ultrasound has a frequency too high for humans to hear, ranging from about 20 kHz to more than 100 kHz. (One kilohertz, kHz, is 1000 cycles per second.)

An obvious advantage of ultrasound in robotics is that the acousticwave bursts are not heard by people working around the robot. These waves, if audible, can be annoying.Another advantage of ultrasound over audible sound is the fact that a system using ultrasound is less likely to be fooled by people talking,machinery operating, and other common noises.At frequencies higher than the range of human hearing, acoustic disturbances do not occur as often, or with as much intensity, as they do within the hearing range.

The simplest sonar scheme is shown in the block diagram. An ultrasonic pulse generator sends bursts of alternating current (AC) to a transducer. This converts the currents into ultrasound, which is sent out in a beam. This beam is reflected from objects in the environment, and returns to a second transducer,which converts the ultrasound back into pulses of AC. These pulses are delayed with respect to those that were sent out. The length of the delay is measured, and the data fed to a microcomputer that determines the distance to the object in question.

This system cannot provide a detailed picture of the environment unless it is refined, and a computer is incorporated to analyze the pulses coming in. Sonar beams tend to be rather broad; acoustic waves are difficult to focus. This limits the image resolution obtainable with sonar. Another problem with this simple system is that it can be fooled if the echo delay is equal to, or longer than, the time between individual pulses.

Researchers know that high-end sonar systems can rival vision systems as a means of mapping the environment, because bats—whose “vision” is actually sonar—can navigate as well as if they had keen eyesight.

What makes bats so adept at using sonar? For one thing, they have a brain. It follows that artificial intelligence (AI) must be an important part of any advanced robotic sonar system. The computer must analyze the incoming pulses in terms of their phase, the distortion at the leading and trailing edges, and whether or not the returned echoes are bogeys (illusions or false echoes).

For good image resolution, the sonar beam must be as narrow as possible, and it must be swept around in two or three dimensions.With optimum direction resolution and distance resolution, a sonar can make a computer map of a robot’s work environment.