Kevin Warwick, once a cyborg and still a researcher in cybernetics at the University of Reading, has been working on creating neural networks that can control machines. He and his team have taken the brain cells from rats, cultured them, and used them as the guidance control circuit for simple wheeled robots. Electrical impulses from the bot enter the batch of neurons, and responses from the cells are turned into commands for the device. The cells can form new connections, making the system a true learning machine.  He and his competitors continue to move this technology forward – animal cyborgs are real. 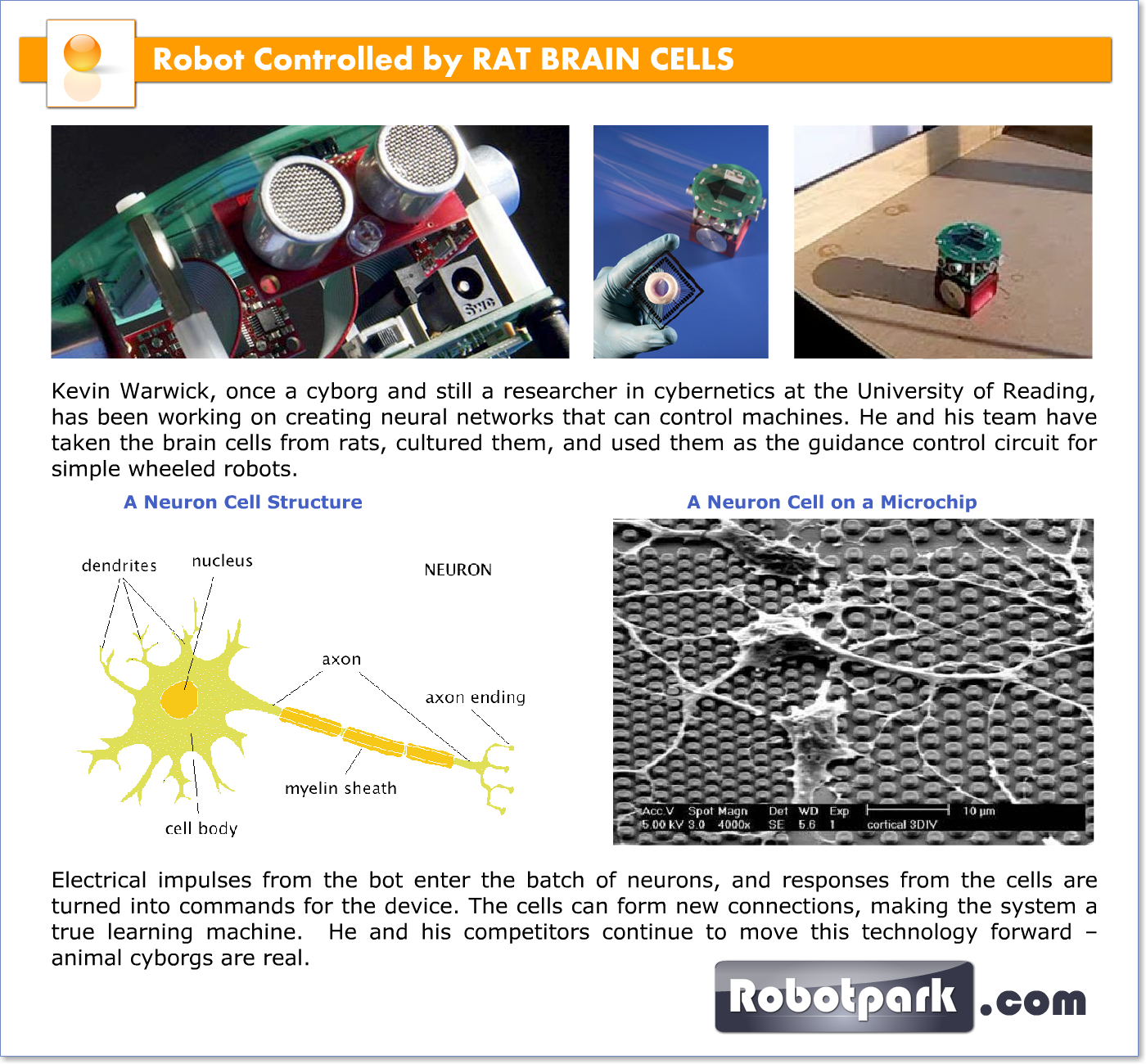 The skills of these rat-robot hybrids are very basic at this point. Mainly the neuron control helps the robot to avoid walls. Yet that obstacle avoidance often shows clear improvement over time, demonstrating how networks of neurons can grant simple learning to the machines. These machines are being controlled by biological cells! It’s simply amazing.

Warwick was busy in the beginning of the year, publishing three papers in regards to biological control of robots. He gave a great overview of the field in both the Defence Science Journal and the Proceedings of the IME, and then he published a really interesting discussion on the implications of these systems in the journal of Ethics and Information Technology. As Warwick points out again and again, these cyborgs are going to become more advanced, probably sooner rather than later. Current cultures of neurons have about 100,000 cells, but only a small fraction are actually involved in controlling the robot circuits at any given time. Research teams continually find new ways to increase the size and response of these cultures, as well as how long they can survive. Eventually, we’ll have a cultured system that is roughly the size of the simplest of mammalian brains. At that point these systems will be able to accomplish much more, but how will we classify devices that contain living cells, especially if they become somewhat intelligent?

Artificial intelligence is usually pursued through computer science, but biotech systems like Warwick’s raise the possibility that cybernetics may be a quicker route to success. There are several other teams around the world working on similar systems (Steve Potter’s group at Georgia Tech is doing pretty well). Collectively these researchers are pushing the boundaries of what biologically controlled machines can perceive and learn. Hopefully we’ll have breakthroughs in animal cybernetics soon. It should be interesting to see if Warwick announces any new successes at his presentation at the IEEE SMC conference this month. I would love some more amazing videos of rat brain robots.