For example, a robot made of such components could assume a worm-like shape to move through a narrow pipe, reassemble into something with spider-like legs to cross uneven terrain, then form a third arbitrary object (like a ball or wheel that can spin itself) to move quickly over a fairly flat terrain; it can also be used for making “fixed” objects, such as walls, shelters, or buildings. 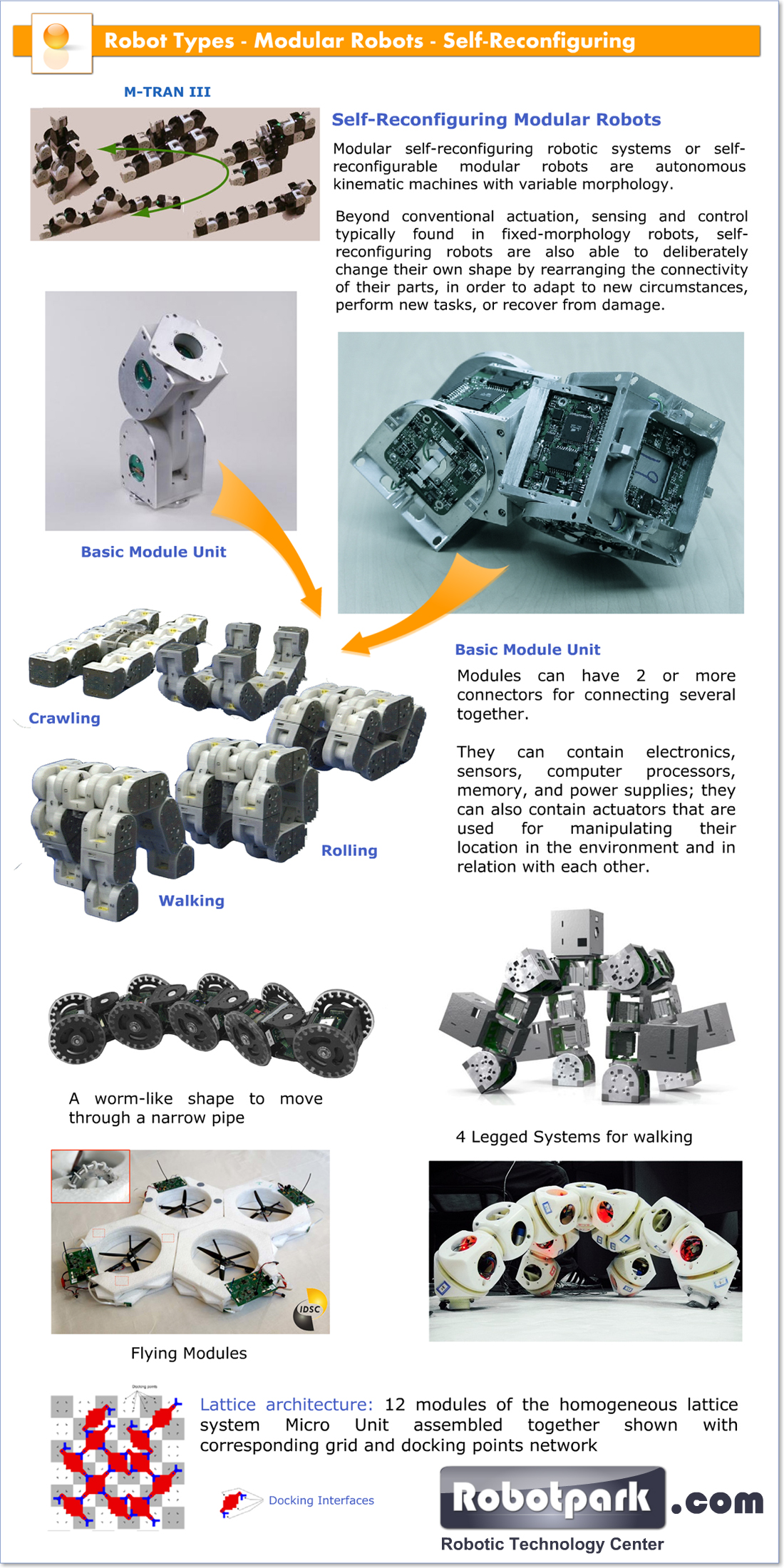 In some cases this involves each module having 2 or more connectors for connecting several together. They can contain electronics, sensors, computer processors, memory, and power supplies; they can also contain actuators that are used for manipulating their location in the environment and in relation with each other. A feature found in some cases is the ability of the modules to automatically connect and disconnect themselves to and from each other, and to form into many objects or perform many tasks moving or manipulating the environment.

By saying “self-reconfiguring” or “self-reconfigurable” it means that the mechanism or device is capable of utilizing its own system of control such as with actuators or stochastic means to change its overall structural shape. Having the quality of being “modular” in “self-reconfiguring modular robotics” is to say that the same module or set of modules can be added to or removed from the system, as opposed to being generically “modularized” in the broader sense. The underlying intent is to have an indefinite number of identical modules, or a finite and relatively small set of identical modules, in a mesh or matrix structure of self-reconfigurable modules.

Structure and Control
Modular robots are usually composed of multiple building blocks of a relatively small repertoire, with uniform docking interfaces that allow transfer of mechanical forces and moments, electrical power and communication throughout the robot. The modular building blocks usually consist of some primary structural actuated unit, and potentially additional specialized units such as grippers, feet, wheels, cameras, payload and energy storage and generation.

A Taxonomy of Architectures
Modular self-reconfiguring robotic systems can be generally classified into several architectural groups by the geometric arrangement of their unit (lattice vs. chain). Several systems exhibit hybrid properties.

• Lattice Architecture have their units connecting their docking interfaces at points into virtual cells of some regular grid. This network of docking points can be compared to atoms in a crystal and the grid to the lattice of that crystal.  Usually few units are sufficient to accomplish a reconfiguration step. Lattice architectures allows a simpler mechanical design and a simpler computational representation and reconfiguration planning that can be more easily scaled to complex systems.

• Chain Architecture do not use a virtual network of docking points for their units. The units are able to reach any point in the space and are therefore more versatile, but a chain of many units may be necessary to reach a point making it usually more difficult to accomplish a reconfiguration step. Such systems are also more computationally difficult to represent and analyze.

• Hybrid Architecture takes advantages of both previous architectures. Control and mechanism are designed for lattice reconfiguration but also allow to reach any point in the space.

• Homogeneous Modular Robot Systems have many modules of the same design forming a structure suitable to perform the required task. An advantage over other systems is that they are simple to scale in size (and possibly function), by adding more units. A commonly described disadvantage is limits to functionality – these systems often require more modules to achieve a given function, than heterogeneous systems.

• Heterogeneous Modular Robot Systems have different modules, each of which do specialized functions, forming a structure suitable to perform a task. An advantage is compactness, and the versatility to design and add units to perform any task. A commonly described disadvantage is an increase in complexity of design, manufacturing, and simulation methods.

Other modular robotic systems exist which are not self-reconfigurable, and thus do not formally belong to this family of robots though they may have similar appearance. For example, self-assembling systems may be composed of multiple modules but cannot dynamically control their target shape. Similarly, tensegrity robotics may be composed of multiple interchangeable modules but cannot self-reconfigure.

• Functional Advantage: Self reconfiguring robotic systems are potentially more robust and more adaptivethan conventional systems. The reconfiguration ability allows a robot or a group of robots to disassemble and reassemble machines to form new morphologies that are better suitable for new tasks, such as changing from a legged robot to a snake robot and then to a rolling robot. Since robot parts are interchangeable (within a robot and between different robots), machines can also replace faulty parts autonomously, leading to self-repair.

• Economic Advantage: Self reconfiguring robotic systems can potentially lower overall robot cost by making a range of complex machines out of a single (or relatively few) types of mass-produced modules.

Both these advantages have not yet been fully realized. A modular robot is likely to be inferior in performance to any single custom robot tailored for a specific task. However, the advantage of modular robotics is only apparent when considering multiple tasks that would normally require a set of different robots.

The added degrees of freedom make modular robots more versatile in their potential capabilities, but also incur a performance tradeoff and increased mechanical and computational complexities.
-The quest for self-reconfiguring robotic structures is to some extent inspired by envisioned applications such as long-term space missions, that require long-term self-sustaining robotic ecology that can handle unforeseen situations and may require self repair.

-A second source of inspiration are biological systems that are self-constructed out of a relatively small repertoire of lower-level building blocks (cells or amino acids, depending on scale of interest). This architecture underlies biological systems’ ability to physically adapt, grow, heal, and even self replicate – capabilities that would be desirable in many engineered systems.