“Which Arduino Board Should I choose ?”
Short Answer: Start With Arduino UNO…

Arduino is, a great robotic microcontroller platform for anyone interested in robots and robotics projects. One of the best things about it is that it’s undergoing constant innovation. There lots of different Arduino boardswhich you can use as your robot controller on the market, so you can find the perfect hardware for any kind of project you’re working on.

Unfortunately, that same huge selection of Arduino boards can make it hard for a beginner to get started with the platform.”Which Arduino Board Should I choose ?”  is the main question. On the official site alone, there are almost 20  Arduino boards listed, and there are dozens more unofficial boards for sale on other sites. Picking the one that’s exactly what you need is HARD—especially if you’re not familiar with the terms used to describe the various microcontrollers and boards.

To help make the process a little easier, we are going to look at the most common Arduino boards on the market right now, and we will explain how to distinguish between them.

A – Processing Capabilities : The first is to look at the board’s processing capabilities — the microcontroller’s memory, clockspeed, and bandwidth. The processing hardware is generally entirely determined by which microcontroller chip the board uses, and constrains what kinds of software can run on that board.

B- Feature Set: The second way to differentiate between the boards is their feature set. This includes all the stuff on the board other than the microcontroller, such as input and output pins, built-in hardware like Buttons and LEDs, and the interfaces available on the board (USB, Ethernet, etc).

C- Form Factor: Finally, because Arduino is meant to be built into physical projects, form factor is very important. Arduino comes a variety of shapes and sizes.

Now Let’s look at the boards you’re most likely to want to use in your project (as of Now 2013).  We’ll examine the distinguishing characteristics and features of each Arduino Board model. 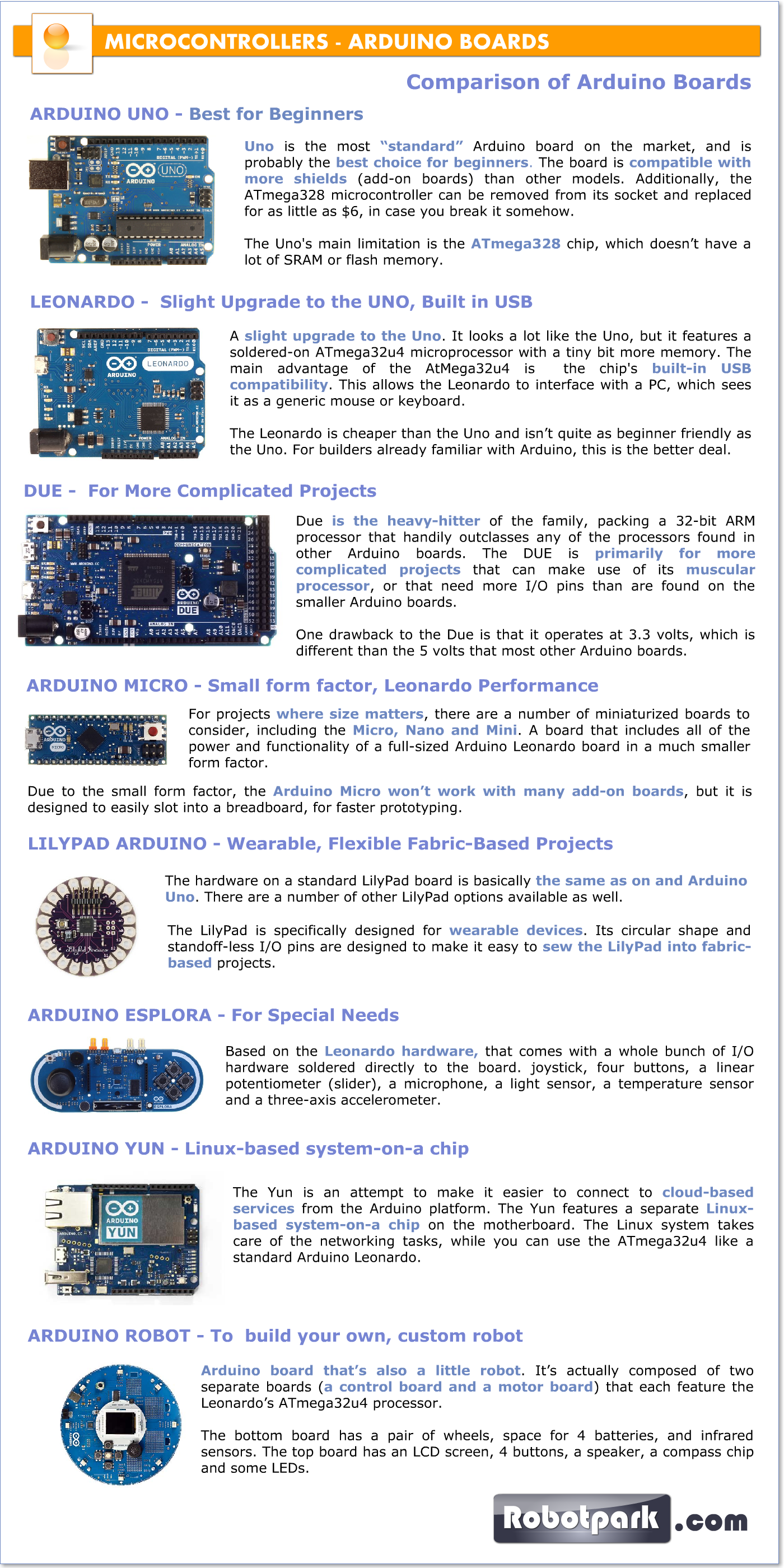 The Arduino Uno is the most “standard” Arduino board currently on the market, and is probably the best choice for beginners just getting started with the platform. The board is compatible with more shields (add-on boards) than other models. Additionally, the ATmega328 microcontroller can be removed from its socket and replaced for as little as $6, in case you break it somehow.

The Uno’s main limitation is the ATmega328 chip, which doesn’t have a lot of SRAM or flash memory. That limits the kinds of programs you can load on the chip—if your project involves a display or otherwise needs to store and use any form of images or audio data, 2KB of memory probably isn’t going to be enough.

Slight Upgrade to the UNO, Built in USB

The Leonardo is, essentially, a slight upgrade to the Uno. It looks a lot like the Uno, but it features a soldered-on ATmega32u4 microprocessor with a tiny bit more memory. The main advantage of the AtMega32u4 isn’t the extra SRAM, though, it’s the chip’s built-in USB compatibility. This allows the Leonardo to interface with a PC, which sees it as a generic mouse or keyboard. It also features a few extra analog input pins.

Most impressively? The Leonardo is actually cheaper than the Uno, at $25. Before you start hammering that “add to shopping cart” button, note that the general impression around the web seems to be that the Leonardo still has a few bugs that need ironing out, and isn’t quite as beginner friendly as the Uno. For builders already familiar with Arduino, this is the better deal.

One of the newest Arduino boards, the Due is the heavy-hitter of the family, packing a 32-bit ARM processor that handily outclasses any of the processors found in other Arduino boards. The DUE is primarily for more complicated projects that can make use of its muscular processor, or that need more I/O pins than are found on the smaller Arduino boards. That said, the Due is substantially bigger and more expensive than the Uno or Leonardo, so consider whether you really need the extra power before making a purchase.

One drawback to the Due is that it operates at 3.3 volts, which is different than the 5 volts that most other Arduino boards operate at. That limits the add-on hardware that’s compatible with the Arduino Due—if an add-on board tries to send a 5 volt signal to the Due’s I/O pins, it could damage the microcontroller. If you need a powerful Arduino board that still operates at 5 volts, you can look at the $58 Arduino Mega 2560, but for the most purposes that board is outperformed by the cheaper DUE.

For projects where size matters, there are a number of miniaturized boards to consider, including the Micro, Nano and Mini (and that’s just on the official Arduino site!). For most builders, the best choice is going to be the Arduino Micro, a new board that includes all of the power and functionality of a full-sized Arduino Leonardo board in a much smaller form factor.

Due to the small form factor, the Arduino Micro won’t work with many add-on boards, but it is designed to easily slot into a breadboard, for faster prototyping.

The LilyPad is an Arduino board specifically designed for wearable devices. Its circular shape and standoff-less I/O pins are designed to make it easy to sew the LilyPad into fabric-based projects.

The Esplora is an Arduino board (based on the Leonardo hardware) that comes with a whole bunch of I/O hardware soldered directly to the board. On the input side you get a joystick, four buttons, a linear potentiometer (slider), a microphone, a light sensor, a temperature sensor and a three-axis accelerometer. For outputs, you get a buzzer, an RGB led, and a TFT display connector to attach a LCD screen (not included).

The tradeoff is that you do not get the standard set of digital and analog I/O pins, which allow you to wire up all sorts of hardware to your Arduino board. That sharply limits the kinds of projects you can make. The Arduino Esplora is best for people who want to learn to use the Arduino software to write programs that have access to a basic toolbox of I/O sources, without having to worry about the electronics side of things.

The Yun is an attempt to make it easier to connect to cloud-based services from the Arduino platform. Typically, the low-bandwidth, low-memory microcontrollers have a hard time handling the verbose protocols used to access those services—to get around this limitation, the Yun features a separate Linux-based system-on-a chip on the motherboard. The Linux system takes care of the networking tasks, while you can use the ATmega32u4 like a standard Arduino Leonardo.

To  build your own, custom Robot

At the risk of stating the obvious, the Arduino Robot is an Arduino board that’s also a little robot. It’s actually composed of two separate boards (a control board and a motor board) that each feature the Leonardo’s ATmega32u4 processor. The bottom board has a pair of wheels, space for 4 batteries, and infrared sensors. The top board has an LCD screen, 4 buttons, a speaker, a compass chip and some LEDs.

Though it’s designed with room to add your own custom hardware, the Arduino Robot is still more preconfigured than most Arduino boards. If you want to build your own, custom robot, you’ll have a lot more flexibility using an Uno or a Leonardo, along with a motor control shield and whatever motors, servos and actuators you want to use.

Input Voltage: This is the suggested input voltage range for the board. The board may be rated for a slightly higher maximum voltage but this is the safe operating range. A handy thing to keep in mind is that many of the Li-Po batteries that we carry are 3.7V meaning that any board with an input voltage including 3.7V can be powered directly from one of our Li-Po battery packs.

System Voltage: This is the system voltage of the board, i.e. the voltage that the microcontroller is actually running at. This is an important factor for shield-compatibility since the logic level is now 3.3V instead of 5V. You always want to be sure that whatever outside system with which you’re trying to communicate is able to match the logic level of your controller.

Digital I/O: This is the number of digital input/output pins that are broken out on the Arduino board. Each of these can be configured as either an input or an output, some are capable of PWM and some double as serial communication pins.

Analog Inputs: This is the number of analog input pins that are available on the Arduino board. Analog pins are labeled “A” followed by their number, they allow you to read analog values using the analog-to-digital converter (ADC) in the ATMega chip. Analog inputs can also be configured as more digital I/O if you need it!

PWM: This is the number of digital I/O pins that are capable of producing a PWM signal. A PWM signal is like an analog output, it allows your Arduino to “fake” an analog voltage between zero and the system voltage.

Flash Space: This is the amount of program memory that the chip has available for your to store your sketch. Not all of this memory is available as a very small portion is taken up by the bootloader (usually between 0.5 and 2KB).

Programming Interface: This is how you hook up the Arduino board to your computer for programming. Some boards have a USB jack on-board so that all you need to do is plug them into a USB cable, others have a header available so that you can plug in an FTDI Basic breakout or FTDI Cable. Other boards, like the Mini, break out the serial pins for programming but aren’t pin-compatible with the FTDI header. Any Arduino board that has a USB jack on-board also has some other hardware that enables the serial to USB conversion. Some boards, however, don’t need additional hardware because their microncontrollers have built-in support for USB.