Festo did it again.

With the BionicOpter, Festo has technically mastered the highly complex flight characteristics of the dragonfly. Just like its model in nature, this ultralight flying object can fly in all directions, hover in mid-air and glide without beating its wings.

Festo isn’t quite the household name that Boston Dynamics is. (And, really, we’re not entirely sure Big Dog is a regular topic of conversation at dinner tables yet.) But, it certainly deserves just as much attention for the work they’re doing with robotics. After crafting a machine last year that soared around like a herring gull, now the company has created BionicOpter. The 17.3-inch long dragonfly drone can flutter through the air in any direction, and even hover, just like its biological inspiration. Its four carbon fiber and foil wings beat up to 20 times per-second, propelling it through the air as if it were swimming rather than flying.

Actually piloting the robo-bug is achieved through a smartphone app, but an on-board ARM-based microcontroller makes small adjustments to ensure stability during flight. There are a few important pieces of information we don’t have just yet. For one, it’s not clear how long the two-cell lithium ion battery will last, and pricing or availability are missing from the brochure (at the source link). Chances are though, you’ll never be able to afford one any way. Thankfully you can at least see this marvel of engineering in action after the break. 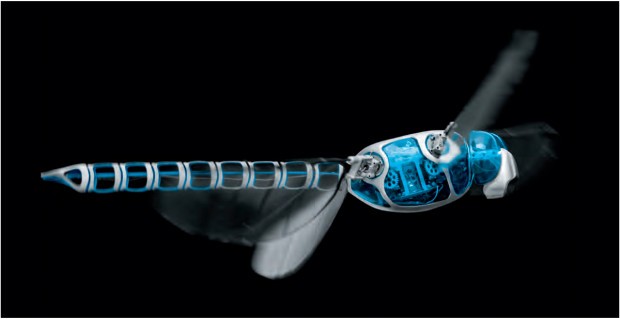 A Natural model for Flight

With the BionicOpter, Festo has applied these highly complex characteristics to an ultra-lightweight flying object at a technical level. For the first time, there is a model that can master more flight conditions than a helicopter, plane and glider combined.

In addition to controlling the flapping frequency and the twisting of the individual wings, each of the four wings features an amplitude controller. This means that the direction of thrust and the intensity of thrust for all four wings can be adjusted individually, thus enabling the remote-controlled dragonfly to move in almost any orientation in space. The intelligent kinematics correct any vibrations during flight and ensure flight stability both indoors and outdoors.

Integration of Functions in the Smallest of Spaces

The unique flight behaviour is made possible by the lightweight design of the model dragonfly and the integration of its functions:
sensors, actuators and mechanical components as well as communication, open and closed-loop control systems are installed ina very small space and connected to one another.

In addition to control of the shared flapping frequency and twisting of the individual wings, each of the four wings also features an amplitude controller. The tilt of the wings determines the direction of thrust. Amplitude control allows the intensity of the thrust to be regulated. When combined, the remote-controlled dragonfly can assume almost any position in space.

This unique way of flying is made possible by the lightweight construction and the integration of functions: components such as sensors, actuators and mechanical components as well as open- and closed-loop control systems are installed in a very tight space and adapted to one another.

With the remote-controlled dragonfly, Festo demonstrates wireless real-time communication, a continuous exchange of information, as well as the ability to combine different sensor evaluations and identify complex events and critical states.

Highly Complex System with Easy Operation
Despite its complexity, the highly integrated system can be operated easily and intuitively via a smartphone. The flapping frequency,amplitude and installation angle are controlled by software and electronics; the pilot just has to steer the dragonfly – there is no need to coordinate the complex motion sequences. 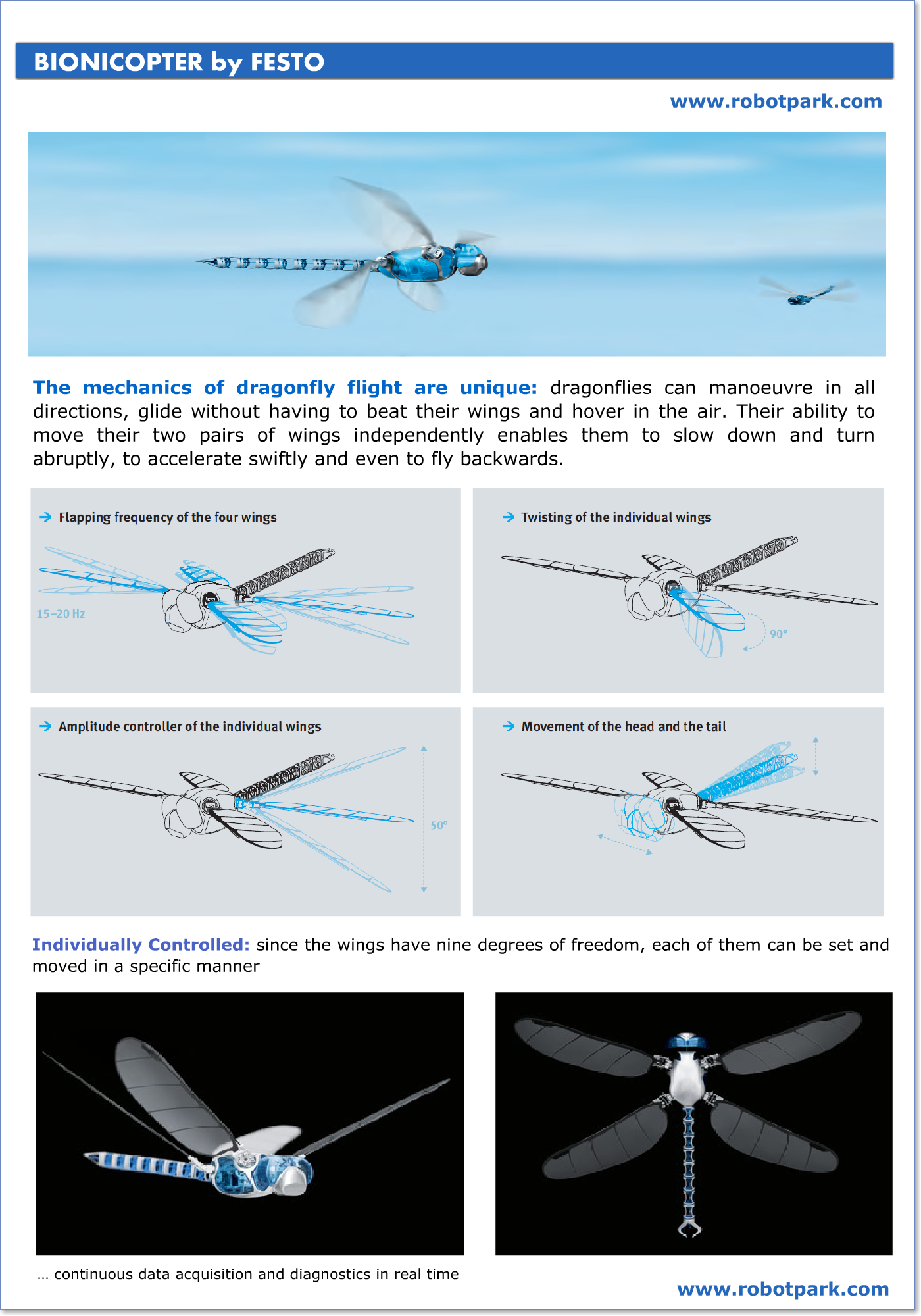