The HyTAQ robot has been developed in the Robotics Lab at Illinois Institute of Technology (IIT), part of the Mechanical, Materials, and Aerospace Engineering Department. It is a novel mobile robot capable of both aerial and terrestrial locomotion. Flight is achieved through a quadrotor configuration; four actuators provide the required thrust. Adding a rolling cage to the quadrotor makes terrestrial locomotion possible using the same actuator set and control system. Thus, neither the mass nor the system complexity is increased by inclusion of separate actuators for terrestrial and aerial locomotion.

During terrestrial locomotion, the robot only needs to overcome rolling resistance and consumes much less energy compared to the aerial mode. This solves one of the most vexing problems of quadrotors and rotorcraft in general — their short operation time. Experimental results show that the hybrid robot can travel a distance 4 times greater and operate almost 6 times longer than a aerial only system. It also solves one of the most challenging problems in terrestrial robot design — obstacle avoidance. When an obstacle is encountered, the system simply flies over it.

A team at the Robotics Lab at the Illinois Institute of Technology (IIT) has come up with another take on the caged flying robots like the spherical air vehicle developed by Japan’s Ministry of Defense (JMD) and the more recent Kyosho Space Ball. However, instead of a spherical shape, the the outer protective cage of the HyTAQ (Hybrid Terrestrial and Aerial Quadrotor) is cylindrical and is attached to the quadrotor via a shaft connected by two rotating joints, thereby providing the HyTAQ with the ability to fly or roll over the ground.

With the quadrotors providing thrust for both aerial and terrestrial locomotion, there’s no requirement for additional actuators that would increase the weight of the system. When on the ground, the rolling cage means the robot only needs to overcome rolling resistance to move forward, and when it encounters an obstacle to difficult to roll over, it can simply take to the air to jump over it. 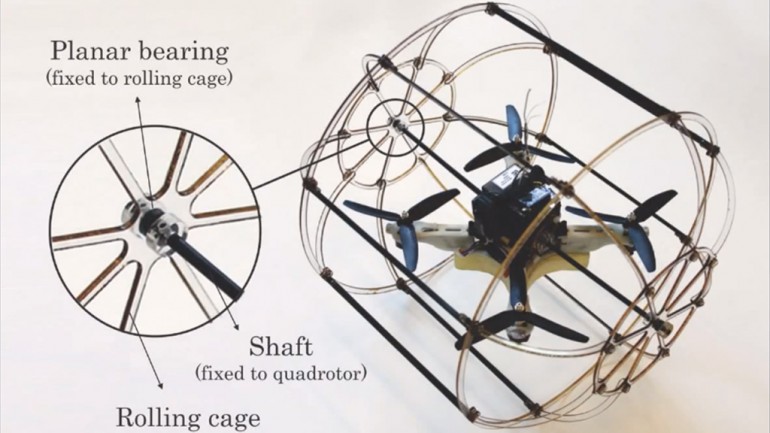 The developers say the robot’s hybrid nature makes it much more energy efficient than aerial-only systems, with the ability to operate almost six times as long and travel a distance four times greater than such systems. Experiments conducted by the team showed that for aerial-only travel, its battery lasted five minutes and it traveled 1,969 ft (600 m), but rolling over a smooth surface saw its endurance extend to 27 minutes and the distance traveled increase to 7,874 ft (2,400 m).

The cage itself is constructed out of polycarbonate and carbon fiber making it both flexible and strong enough to withstand crashing. The development team has tested the HyTAQ’s ground performance over various types of terrain, including flat indoor surfaces and sand and grass outdoors. The ground locomotion capabilities also allow the robot to move when it’s too windy for flight.

Like its spherical kin, the reconnaissance and search and rescue potential of the camera-equipped robot are obvious and the team is now in the process of patenting the design and hopes to attract commercial interest.

The HyTAQ robot can be seen in action in the following video.