Anywhere you would like to add intelligence you use a Microcontroller…

A microcontroller (sometimes abbreviated µC, uC or MCU) is a small computer on a single integrated circuit containing a processor core, memory, and programmable input/output peripherals. Program memory in the form of NOR flash or OTP ROM is also often included on chip, as well as a typically small amount of RAM. Microcontrollers are designed for embedded applications, in contrast to the microprocessors used in personal computers or other general purpose applications.

Microcontrollers are used in automatically controlled products and devices, such as automobile engine control systems, implantable medical devices, remote controls, office machines, appliances, power tools,robots and other embedded systems. By reducing the size and cost compared to a design that uses a separate microprocessor, memory, and input/output devices, microcontrollers make it economical to digitally control even more devices and processes.

Some microcontrollers may use 4-bit words and operate at clock rate frequencies as low as 4 kHz, for low power consumption (single-digit milliwatts or microwatts). They will generally have the ability to retain functionality while waiting for an event such as a button press or other interrupt; power consumption while sleeping (CPU clock and most peripherals off) may be just nanowatts, making many of them well suited for long lasting battery applications. Other microcontrollers may serve performance-critical roles, where they may need to act more like a digital signal processor (DSP), with higher clock speeds and power consumption. 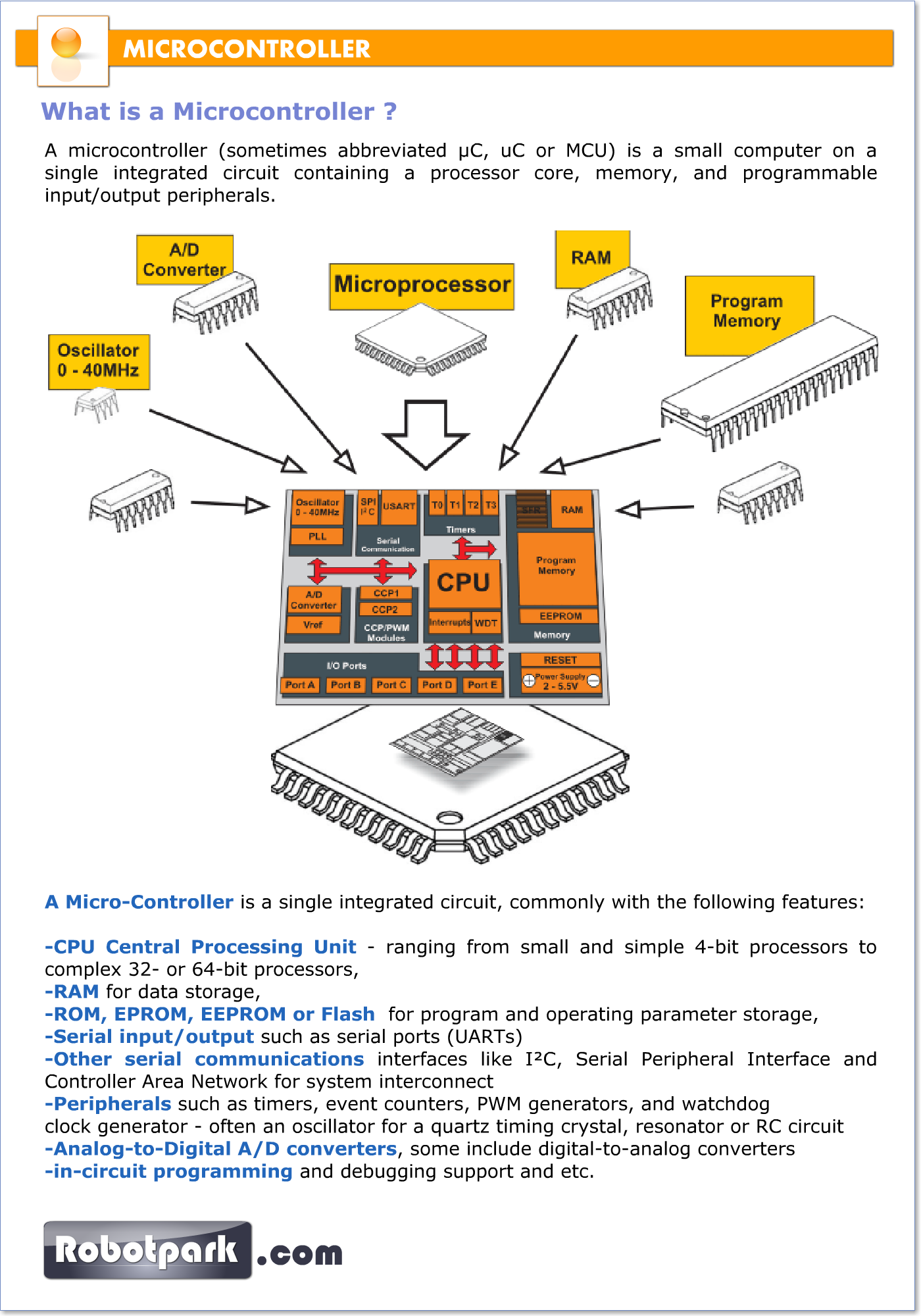 A micro-controller is a single integrated circuit, commonly with the following features:

While some embedded systems are very sophisticated, many have minimal requirements for memory and program length, with no operating system, and low software complexity. Typical input and output devices include switches, relays,solenoids, LEDs, small or custom LCD displays, radio frequency devices, and sensors for data such as temperature, humidity, light level etc. Embedded systems usually have no keyboard, screen, disks, printers, or other recognizable I/O devices of a personal computer, and may lack human interaction devices of any kind.

Microcontrollers must provide real time (predictable, though not necessarily fast) response to events in the embedded system they are controlling. When certain events occur, an interrupt system can signal the processor to suspend processing the current instruction sequence and to begin an interrupt service routine (ISR, or “interrupt handler”). The ISR will perform any processing required based on the source of the interrupt, before returning to the original instruction sequence. Possible interrupt sources are device dependent, and often include events such as

Where power consumption is important as in battery operated devices, interrupts may also wake a microcontroller from a low power sleep state where the processor is halted until required to do something by a peripheral event.

Typically microcontroller programs must fit in the available on-chip program memory, since it would be costly to provide a system with external, expandable, memory. Compilers and assemblers are used to convert high-level language and assembler language codes into a compact machine code for storage in the microcontroller’s memory. Depending on the device, the program memory may be permanent, read-only memory that can only be programmed at the factory, or program memory that may be field-alterable flash or erasable read-only memory.

In addition to the converters, many embedded microprocessors include a variety of timers as well. One of the most common types of timers is the Programmable Interval Timer (PIT). A PIT may either count down from some value to zero, or up to the capacity of the count register, overflowing to zero. Once it reaches zero, it sends an interrupt to the processor indicating that it has finished counting. This is useful for devices such as thermostats, which periodically test the temperature around them to see if they need to turn the air conditioner on, the heater on, etc.

Universal Asynchronous Receiver/Transmitter (UART) block makes it possible to receive and transmit data over a serial line with very little load on the CPU. Dedicated on-chip hardware also often includes capabilities to communicate with other devices (chips) in digital formats such as I²C and Serial Peripheral Interface (SPI). 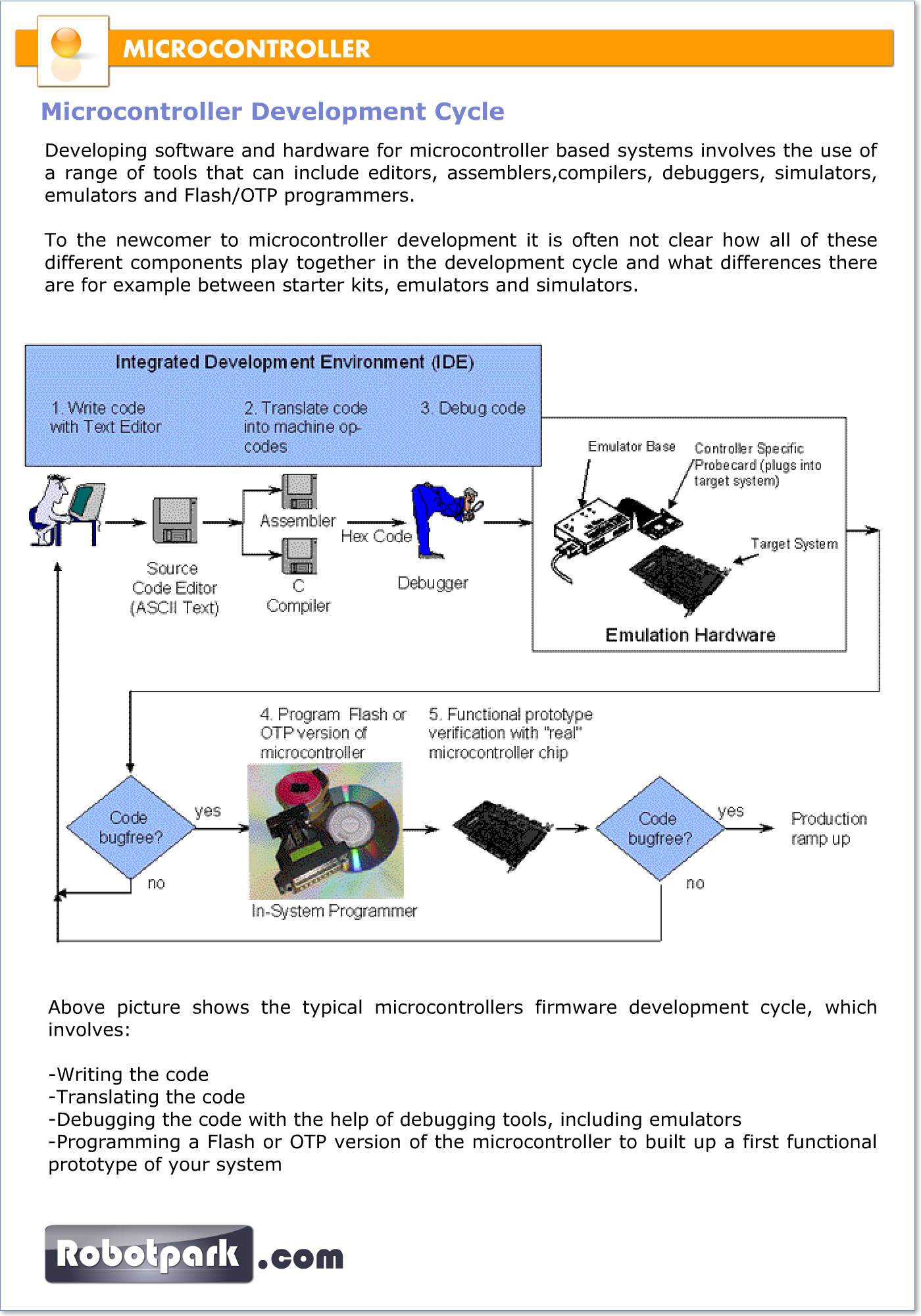 Non-Volatile Memory - This is memory used by the microcontroller to store programs. Data can also be stored in this memory but the access time is much slower than that of RAM. Memory in this category includes ROM, PROM, EPROM, EEPROM and FLASH. The AVR microcontrollers utilize Flash for program storage, some AVR controllers contains a bit of EEPROM as well.

Timer Module - Most microcontrollers have at least one timer/counter peripheral. Timer/Counter modules are used to perform timing or counting operations in the controller. These include time stamping, measuring intervals, counting events, etc.

Interrupt Module - Interrupts enable the microcontroller to monitor certain events in the background while executing and application program and react to the event if necessary pausing the original program. This is all coordinated by the interrupt module.

Digital I/O Module - This module allows digital/logic communication with the microcontroller and the external world. Communication signals are that of TTL or CMOS logic.

Analog I/O Modules - These modules are use to input/output analog information from/to the external world. Analog modules include Analog Comparators and Analog-to-Digital Converters.

Serial Modules - These modules are used for serial communication with the external world. An example is the USART peripherial which utilizes the RS232 standard.