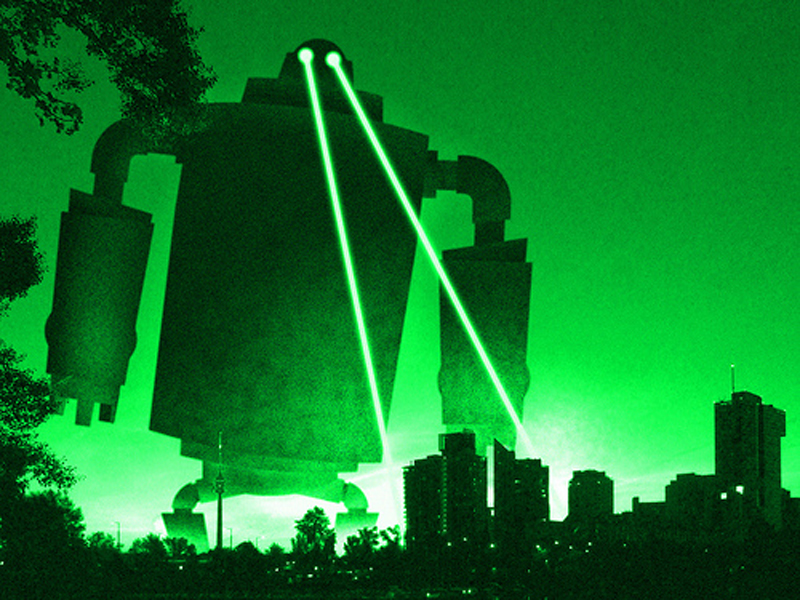 Could Robots ever Take Over the World? 31038

They may not yet have reached the startlingly lifelike capabilities of Sonny, the soft-spoken android in the movie I, Robot, but they’re getting closer.

This week it has been reported that robots are moving ever nearer to acquiring human abilities – to smell, feel and see their surroundings, allowing them to operate more independently and perform some of the messy, and dangerous, jobs that people don’t want to do.

Machines are being created that can “smell” gas leaks, carry out underwater surveillance, and sort packages by shape and colour – and advances in sensor technology enable them to make decisions without human beings overseeing them.

On Friday, Kirobo, the world’s first talking humanoid space robot, is due to arrive at the International Space Station, where it will patiently await the arrival of the next astronaut there, Koichi Wakata from Japan. It has been programmed to recognise his face – and greet him warmly in his native tongue.

What is the future for robots ?

and could they, as they did in the Will Smith film, try to take over the world?

Three senior figures at Cambridge University have been exploring that topic this week in an online question-and-answer session for the university’s Department of Engineering: Lord Martin Rees, Emeritus Professor of Cosmology and Astrophysics; Kathleen Richardson, who did her PhD at Cambridge and is writing a book about robots as potential friends or enemies; and Daniel Wolpert, from the Department of Engineering, an expert in bioengineering.

In answer to the question, what can robots do for us? Lord Rees said: “Robots have two very different roles.

-The first is to operate in locations that humans can’t reach, such as the aftermaths of accidents in mines, oil rigs and nuclear power stations.

Moreover, if robots can be miniaturised, they can perhaps be used inside our bodies for monitoring our health, undertaking surgery, and so forth.”

Prof Wolpert said: “While computers can now beat grandmasters at chess, there is currently no robot that can match the dexterity of a five-year-old child. The field of robotics is similar to where computers were in the 1960s – expensive machines used in simple, repetitive industrial processes. But modern day robotics is changing that. Robots are likely to become as ubiquitous as the smartphone computers we all carry – from microscopic robotics for healthcare and fabrication to human-size robots to take on our everyday tasks or even act as companions.”

Lord Rees said: “Up till now, the advances have been patchy. For at least the last 30 years, we’ve been able to buy for a few pounds a machine that can do arithmetic faster than our brains can. Back in the 1990s IBM’s ‘Deep Blue’ beat Kasparov, the world chess champion. But robots are still limited in their ability to sense their environment: they can’t yet recognise and move the pieces on a real chessboard as cleverly as a child can.

“Later this century, however, their more advanced successors may relate to their surroundings (and to people) as adeptly as we do. Moral questions then arise. We accept an obligation to ensure that other human beings, and indeed some animal species, can fulfil their ‘natural’ potential. So what’s our obligation towards sophisticated robots? Should we feel guilty about exploiting them? Should we fret if they are underemployed, frustrated, or bored?”

Dr Richardson said: “The human fear of robots and machines arguably has much more to say about human fear of each other rather than anything inherently technical in the machines. However, one of the consequences of thinking that the problem lies with machines is that as a culture we tend to imagine they are greater and more powerful than they really are – and subsequently they become so.”

Should we be scared by advances in artificial intelligence?

Lord Rees said: “Those who should be worried are the futurologists who believe in the so-called ‘singularity’, when robots take over and themselves create even more sophisticated progeny. And another worry is that we are increasingly dependent on computer networks, and that these could behave like a single ‘brain’ with a mind of its own, and with goals that may be contrary to human welfare. I think we should ensure that robots remain as no more than ‘idiot savants’ – lacking the capacity to outwit us, even though they may greatly surpass us in the ability to calculate and process information.”

Should robots be used to colonise other planets?

Lord Rees believes that by the end of the century, the entire solar system – planets, moons and asteroids – will be explored and mapped by “flotillas of tiny robotic craft.”

He said: “The next step would be mining of asteroids, enabling fabrication of large structures in space without having to bring all the raw materials from Earth. It would be possible to develop huge artefacts: giant telescopes with gossamer-thin mirrors assembled under zero gravity, collectors of solar energy, and so forth. I think this is more realistic and benign than the so-called ‘terraforming’ of planets.”

Prof Wolpert added: “I don’t see a pressing need to colonise other planets unless we can bring resources back to Earth. The vast majority of Earth is currently inaccessible to us. Using robots to gather resources nearer to home would seem to be a better use of our robotic tools.”

Resource Links:
More about the Cambridge experts’ views on robots can be found on the engineering department’s website, at