“Swarming Micro Air Vehicle Network (SMAVNET) Project”
“An autopilot controls altitude, airspeed and turn rate and chooses the most economical flight strategy”
“Although the robots are autonomous, they can be monitored and controlled through a swarm-interface running on a single PC” 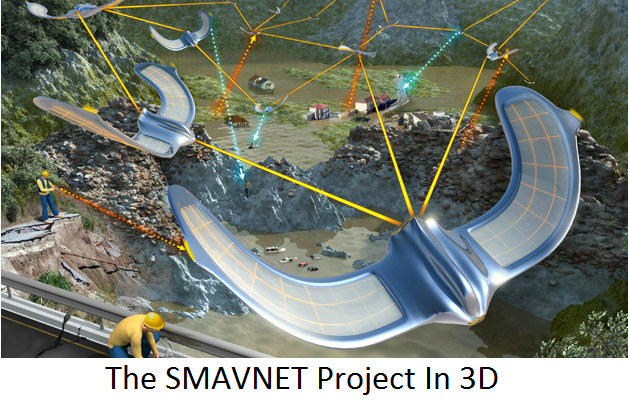 Swarms of flying robots might sound a bit ominous to those of us anxiously awaiting the inevitable robot uprising that will see humanity drop a notch on the scale of planetary dominance. But swarms of flying robots are just what a project at the Ecole Polytechnique Federale de Lausanne (EPFL) in Switzerland is working to create. However, instead of keeping an eye on prisoners in a robot-run internment camp, the Swarming Micro Air Vehicle Network (SMAVNET) Project aims to develop robot swarms that can be deployed in disaster areas to rapidly create communication networks for rescuers.

The individual micro air vehicles (MAVs) are built out of Expanded Polypropylene (EPP) resulting in a weight of just 420g (14.8 ounces). With a wingspan of 80cm (31.5-inches) the MAVs have an electric motor mounted at the back and two control surfaces serving as elevons (combined ailerons and elevator). The robots run on a lithium polymer (LiPo) battery that provides 30 minutes of flying time.

An autopilot controls altitude, airspeed and turn rate, while a micro-controller embedded in the autopilot chooses the most economical flight strategy based on input from three sensors: a gyroscope and two pressure sensors. The autopilot runs on a Toradex Colibri PXA270 CPU board running Linux, which is also connected to an off-the-shelf USB Wi-Fi dongle. In order to log flight trajectories, the robot is also equipped with a u-blox LEA-5H GPS module and a ZigBee (XBee PRO) transmitter. 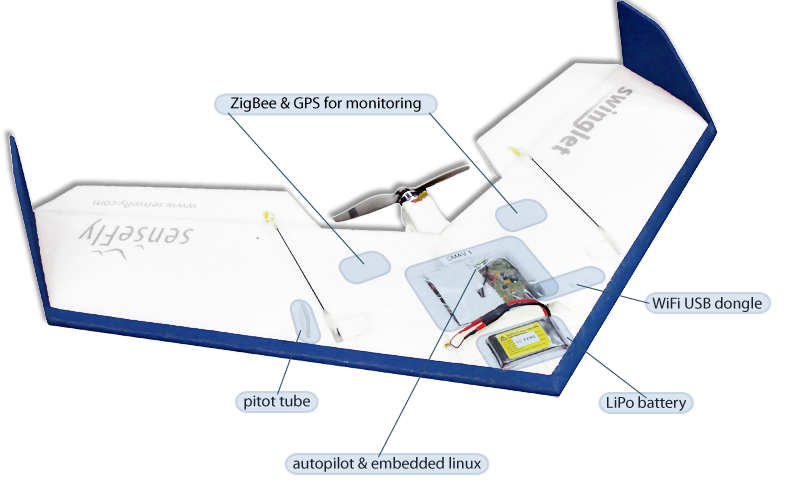 As is so often the case, the SMAVNET designers turned to nature for inspiration in creating the behavior of the swarm. For the deployment and maintenance of retraction of the swarm MAV network the team turned to the army ants, which are able to lay and maintain pheromone paths from the nest to food sources. This method allows the swarm to maintain communication pathways between a base node and rescuers in the environment.

The robots use wireless communication between the robots themselves as a sensor instead of other methods that depend on the environment (GPS, cameras) or more expensive and heavy methods (lasers, radars). As the move out from their base to the users individual robots will hold position and form a node as the remainder of the swarm continues on until the objective is reached and the network complete. Although the robots are autonomous, they can be monitored and controlled through a swarm-interface running on a single PC. 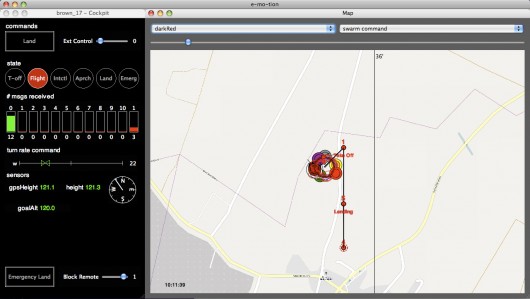 Although 30 minutes of flight time might be somewhat limiting in a real world disaster situation, the EPFL team has conducted tests of the SMAVNET system that demonstrate its feasibility and provide encouragement for the team to continue with their efforts to create a low-cost system that could be deployed quickly in disaster hit areas.