Worm gears resemble screws. A worm gear is usually meshed with a spur gear or a helical gear, which is called the gear, wheel, or worm wheel.

Worm-and-gear sets are a simple and compact way to achieve a high torque, low speed gear ratio. For example, helical gears are normally limited to gear ratios of less than 10:1 while worm-and-gear sets vary from 10:1 to 500:1. A disadvantage is the potential for considerable sliding action, leading to low efficiency. 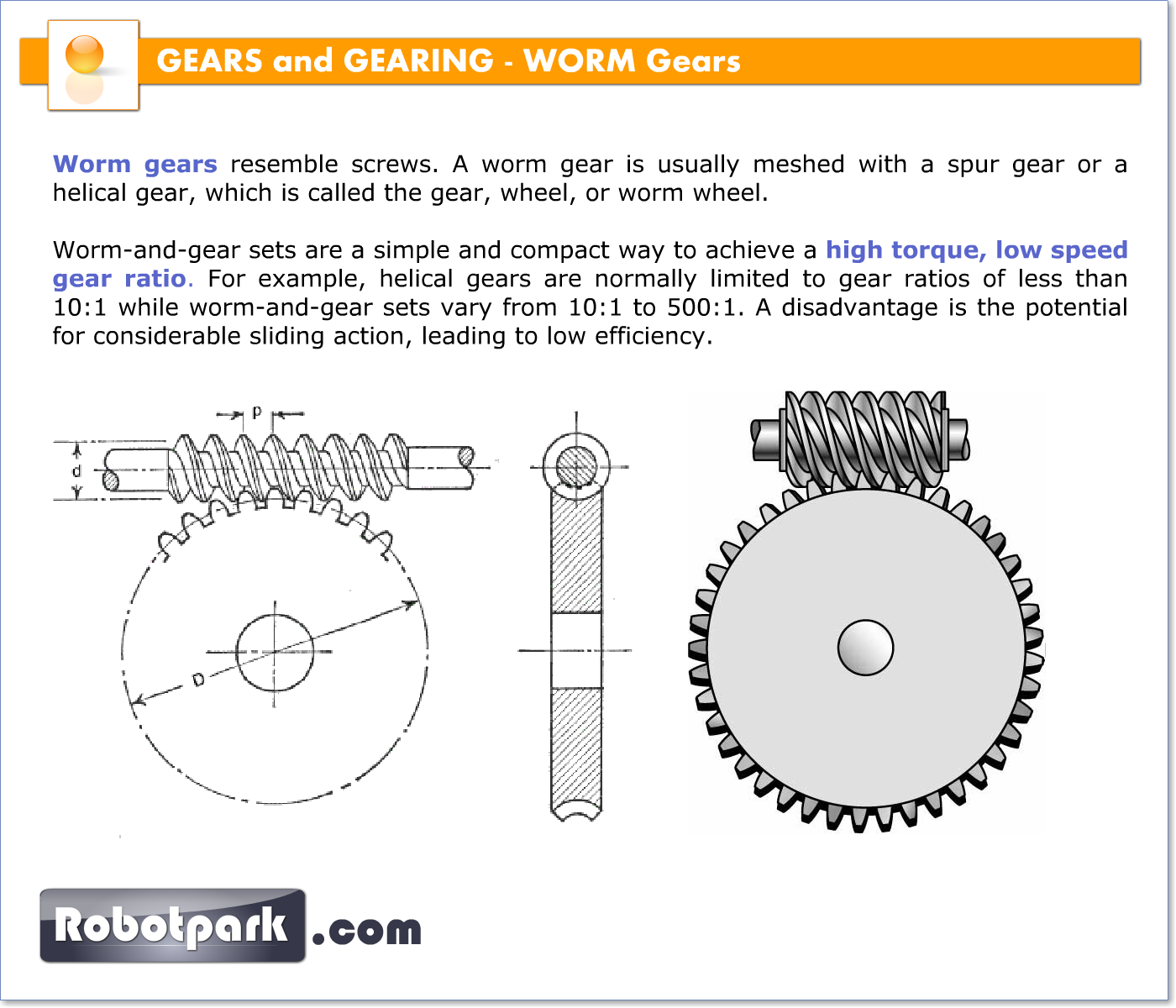 Worm gears can be considered a species of helical gear, but its helix angle is usually somewhat large (close to 90 degrees) and its body is usually fairly long in the axial direction; and it is these attributes which give it screw like qualities. The distinction between a worm and a helical gear is made when at least one tooth persists for a full rotation around the helix. If this occurs, it is a ‘worm'; if not, it is a ‘helical gear’. A worm may have as few as one tooth. If that tooth persists for several turns around the helix, the worm will appear, superficially, to have more than one tooth, but what one in fact sees is the same tooth reappearing at intervals along the length of the worm. The usual screw nomenclature applies: a one-toothed worm is called single thread or single start; a worm with more than one tooth is called multiple thread or multiple start. The helix angle of a worm is not usually specified. Instead, the lead angle, which is equal to 90 degrees minus the helix angle, is given.

In a worm-and-gear set, the worm can always drive the gear. However, if the gear attempts to drive the worm, it may or may not succeed. Particularly if the lead angle is small, the gear’s teeth may simply lock against the worm’s teeth, because the force component circumferential to the worm is not sufficient to overcome friction. Worm-and-gear sets that do lock are called self locking, which can be used to advantage, as for instance when it is desired to set the position of a mechanism by turning the worm and then have the mechanism hold that position. An example is the machine head found on some types of stringed instruments.

If the gear in a worm-and-gear set is an ordinary helical gear only a single point of contact will be achieved. If medium to high power transmission is desired, the tooth shape of the gear is modified to achieve more intimate contact by making both gears partially envelop each other. This is done by making both concave and joining them at a saddle point; this is called a cone-drive. or “Double enveloping”

Worm gears can be right or left-handed, following the long-established practice for screw threads.

Properties of a Worm Gear: